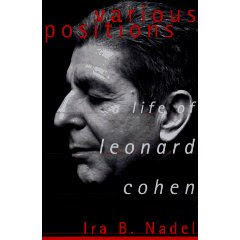 The past week or so I’ve been reading a friend’s copy of Various Positions: a life of Leonard Cohen by Ira B. Nadel (Vintage, 1997), a book I’ve actually been wanting to read for some time. How can anyone not want to read about Leonard? The poet-priest of Montreal, who I think every single one of us either wanted as lover or role model or both (I wanted as role model, for the record) when we were seventeen years old. Today I sit in a borrowed apartment in Edmonton, and keep thinking about this poem of his from Selected Poems 1956-1968 (McClelland & Stewart, 1968), one of the poems of his that I keep returning to, and perhaps, one of my favourite pieces of his:

Edmonton, Alberta, December 1966, 4 a.m.
When did I stop writing you?
The sandalwood is on fire in this small hotel on Jasper Street.
You've entered the room a hundred times
disguises of sari and armour and jeans,
and you sit beside me for hours
like a woman alone in a happy room.
I've sung to a thousand people
and I've written a small new song
I believe I will trust myself with the care of my soul.
I hope you have money for the winter.
I'll send you some as soon as I'm paid.
Grass and honey, the singing radiator,
the shadow of bridges on the ice
of the North Saskatchewan River,
the cold blue hospital of the sky --
it all keeps us such sweet company.

I remember going to the Chelsea Hotel in New York, running by and through with Stephen Brockwell and Clare Latremouille back in 2003, images of, among others, Cohen running like sugarplums through our heads. Part of what caught me in this collection, specifically, was the description of Anne Sherman, muse for another of my favourite poems of his. The section reads:

Sherman embodied all of the sexual freedom and guiltless love that Cohen had had difficulty finding in other women. For the next five or six years, Cohen continued to write about her in both poetry and prose. A notebook from the summer of 1958 contains a series of references to Sherman as well as the poem “To Anne in the Window Seat,” which expresses his grief over having to live without her. In a white notebook from Greece dated September 1961, there is a poem entitled “To Anne”:

I’d no sooner forget you
than pretty houses or legends
or success
But sometimes Meadowheart
is lost, Isolde is lost,
the new apartment is lost
and I’m invisible
in the cold machines of universe
that won’t stop
or slow to let you kiss

In the same notebook he adds:

Reader, I am anxious about
your discipline
are you constant as me?
Otherwise, burn this book
Go to the movies
if you aren’t doubled up with laughing.

The nature of that thing that catches, whatever it might be. Here, too, the poem he eventually published on Anne, from The Spice-Box of Earth (1961):

With Annie gone,
Whose eyes to compare
With the morning sun?

Not that I did compare,
But I do compare
Now that she’s gone.

In 1960 Anne Sherman married a NY restaurateur and owner of Orsini's and changed her name to Georgianna. Could she have any connection to "Ann Louise Sherman" mentioned once in Catcher in the Rye as a girl Holden Caulfield necked with...

I ask because Catcher in the Rye was published in 1951 when LC was approximately the same age as Holden...