The first days of festival, Ottawa; 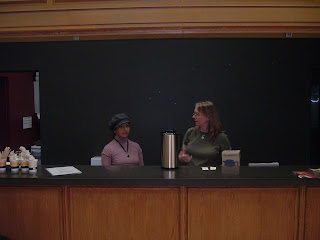 [two festival staff working the bar, including Kathryn Hunt, on the right] So here we go again, the Ottawa International Writers Festival, which started on Saturday morning with a small press book fair (specific to Ottawa publishers), co-hosted by the Ottawa Independent Writers and myself, the small press action network – ottawa (SPAN-O, cleaning out yr literary clogs since 1996; host of the ottawa small press book fair, invented way back in 1994). Book fairs are always fun, and many of the usual suspects showed up, including jwcurry, Buschek Books, Griddle Grin Productions, In/Words, The Ottawa Arts Review, Bywords, Dusty Owl Press, Penumbra Press, The Puritan (even though they now live in Toronto), and the University of Ottawa Press, as well as numerous tables by members of the OIW. We did well enough, I think, and I used it, in part, to promote the proper larger fair happening in less than a month, which none of the OIW seemed to have even heard about (they have their own fair happening in early November at Billings Bridge). 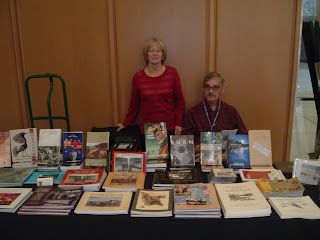 [John Flood, Penumbra Press] After the fair itself, there was a meet and greet of some sort, where various “movers & shakers” of the community got up to talk about what it is we do, are doing, etcetera. I think we all completely disagreed with what the fellow running OIW said, including suggesting that publishers weren’t respectful enough of the materials coming in, etcetera; why turn an author against publishers? According to him, a publisher wasn’t respectful of a manuscript unless they actually read the complete manuscript, and should offer suggestions instead of simply arbitrarily turning the thing down. Geez, who has the staff or the time for that? And if you can’t tell a manuscript doesn’t appeal in the first twenty pages or even forty, then the last page isn’t really going to change your mind, I’d think. There was also the conflict of his suggesting he was a promoter of general Ottawa writing and Ottawa writers, when this is the first time we've seen him at an event, in the twelve years of festival (he doesn't come out to anything of ours, either); why not just admit that he's only interested in what members of OIW do? 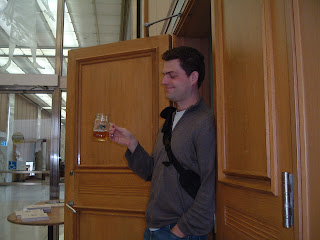 [Sean Wilson, Festival Director, enjoying a Beau's] John Flood and John Buschek addressed such pretty well, about the possibilities of time, and just how many manuscripts they receive in a year, and other things like that (Jennifer and I even spoke on Chaudiere, and myself, later on, on above/ground press, The Factory Reading Series, the small press book fair, ottawater, etcetera; I ran out of time well before I ran out of subjects, so left a whole bunch of stuff out). Still, Flood, and later, Steve Artelle, both sounded like they were running for office. When Steve Zytveld was talking, I think I yelled “four more years!” or somesuch from the back of the room. Ah, festival. It was still an interesting idea, various of us talking about what and why that we do, for the sake of those in the audience who wouldn’t have known; Sean Wilson said it was a response to various phone calls he’s received over the years from writers who want to get published, know how to get published, so I think the evening accomplished everything it set out to do, whether or not any of us thought the whole thing dopey completely irrelevant. 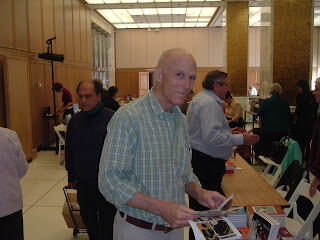 [poet and Arc magazine editor Peter Richardson, preparing their table] I’m glad that the Ottawa Book Awards is now part of the writers festival, making it feel like a real event, and not what it used to be, back in the mid-1990s, as part of the Ottawa Valley Book Festival, or whatever it was called. A horse with three broken legs, while the sign at the front offered free pony rides. Elizabeth Hay, of course, won the Ottawa Book Award for her Late Nights on Air (2007), and Shane Rhodes won the Lampman-Scott award for The Bindery (2007). I admired greatly that Shane Rhodes said he would donate half of his prize money for aboriginal causes, for the sake of what damage poet Duncan Campbell Scott did as Minister of Indian Affairs (residential schools started under his watch, for example). A good idea and a great gesture. Still, apparently with the conflict of Arc Poetry Magazine running the award, editorial board member Rob Winger didn’t feel it appropriate to let his book even be part of such, and editor Anita Lahey did the same last year; what happens when a good percentage of poetry books by Ottawa-based authors aren’t put forth for the sake of conflict? It no longer becomes an award of whatever one thinks of as being “best” (an arbitrary term at best, I admit); is there someone else around that could take this award on? Should the festival itself take it?
related links on the festival (so far): Amanda Earl, Charles Earl, etc;
Posted by rob mclennan at 1:06 PM
Labels: Elizabeth Hay, jwcurry, ottawa small press book fair, report, Shane Rhodes, The Ottawa International Writers Festival