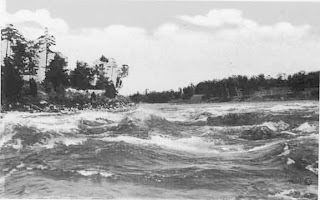 It is architecture, it is history, there
is nothing to lament/
— Don McKay, Long Sault

It's been roughly fifty years since the construction of the St. Lawrence Seaway Project of the 1950s, flooding the "lost villages" along the water, removing the Long Sault Rapids a few miles down the river from the industrial border-town, Cornwall, for the sake of accommodating a higher volume of shipping along the seaway, as well as constructing hydroelectric dams. In his book on the St. Lawrence River, River Song (2001), Phil Jenkins wrote that it was on St. Lawrence's Day, August 10, 1954, when speeches were made on both sides of the river by "a clutch of chairmen of power companies, a governor, a premier and a prime minister." After five years of construction, there finally came the business and ceremonial openings of the Seaway, with the first on April 29, 1959, and a second on June 26, for the sake of the royal yacht Britannia, carrying both Queen Elizabeth II and President Eisenhower. One of the best and most well known references to the project in Canadian poetry over the intervening years has to be Don McKay’s Long Sault (1975), a long poem based upon his own childhood memories of the project just west of where he grew up. McKay, raised with two siblings in nearby Cornwall, turned the Long Sault rapids into the main character in a poetic drama, of growth that came out of a terrible loss, writing:

It is a tale full of its endings.
There are all these poems standing
like plumbers amid the ruined buildings
gesturing tool boxes
at the absence of bathrooms in the air, is this
some sort of joke?
And only the Long Sault is laughing:
Fuck your renaissance, get me a beer.

This is a stretch of the river the British once feared for the sake of our southern neighbours, slightly east of 1812 country, and for decades, held off from threats of American invaders and later, Fenian Raids, thanks to the Scottish immigrants that lined the north shore, as well as for what was still left of the local First Nations population, including Mohawk and Algonquin. This was the stretch of river and the American threat that eventually gave Ottawa, further inland, the capital, instead of Montreal, Kingston or Toronto. When the water eventually came through with the flood, it pushed the two countries apart, just a little further, over a century after the threat had long diminished. As writer and critic Stan Dragland originally wrote of Long Sault (rewritten for Brian Bartlett's Don McKay: Essays on His Works):

Long Sault is a sequence of poem-riffs on the construction, official opening June 1959, of the St. Lawrence Seaway, especially the section near McKay's home town of Cornwall. McKay doesn't hate the Seaway, as far as I know, and he's a customer of Ontario Hydro. But he has strong feelings for the drowned Long Sault rapids, for other rapids still with us and for untouched nature generally. Nature, like poetry, is not appreciated at all if regarded only as useful, as a means to some end.

Published as his second trade poetry collection by Applegarth Follies, a publishing precursor to his current Brick Books (one of but a handful of poetry-only publishing companies in Canada), the book has been out of print for years, making the only place to find this fantastic early poem on the project either in a library (unfortunately, it wasn't included in his 2004 selected poems, Camber), or (more likely) in a second-hand copy of Michael Ondaatje's The Long Poem Anthology (Toronto ON: Coach House Press, 1979), where it appears in full. The Seaway was a project my ex-wife’s father also worked on, along with hundreds of other men from the surrounding area. In a statement for Long Sault for Ondaatje's anthology, McKay wrote:

Long Sault began with the subject, which I'd carried around a long time and needed to write — a big energy and loss, both for myself and the community. When the hydroelectric dam was constructed at Cornwall, Ontario during the late fifties, the St. Lawrence River flooded upstream as far as Iroquois, submerging a length of shoreline rich in history and tradition. Villages like Wales, Mille Roches, Moulinette, Dickinson’s Landing were ‘relocated,’ and — focal point of this poem — the Long Sault Rapids was drowned. It was only after I got going that I found myself in a longer sequence which then grew by grope and feel. At first I had in mind something short and tough, left jab, angry elegy. But doing that I found other planes of the subject, realized that the moves and power of the long sault weren’t really locked up in the dam, began thinking of all the rapids I’d experienced and found them moving in surprising places and pushing the writing into different forms, looked into historical accounts which touched on the long sault, like those by Alexander Henry and George Hirot (whose words introduce ‘At the Long Sault Parkway’), and I guess generally got sucked in, the way my eyes always got sucked into watching the long sault during Sunday excursions, and still get mesmerized by that furious stillness.

My father has a photograph taken between 1958 and 1961, he says, between the time the new milk-house was built, and the previous torn down. It shows both buildings, one that was just new, and the other, that no longer exists. Apparently it became required to have the milk-house attached to the barn, so the original, ten paces or so from the barn door (where he now keeps the gas pumps, one for diesel and the other for ethanol), could no longer be used. He tells a story of his father and a neighbour going out to Long Sault to buy wood as the towns were being moved, his father buying an abandoned shed and his neighbour a gas station, bringing both buildings home in pieces on the back of a rented truck, to rebuild what they needed out of the materials. Our milk-house, then, where the tank sat, emptied every two days by the milk truck from Montréal, built from wood taken from an entire small building that once stood where twenty or forty foot of water now rests, moving slowly out along the St. Lawrence to the Atlantic. For the sake of the flooding, seven villages were scheduled for demolition, some partial, some complete, as the locations were set to be submerged, and relocated as three newly constructed villages, whether the occupants wished to leave or not. As Jenkins wrote,

This was because of the required rise in the river to make it bigger, and hence drown the rapids. Aultsville, Dickinson's Landing, Farran's Point, Iroquois, Milles Roches and Moulinette would disappear off the map, with Morrisburg undergoing amputation. Five hundred and thirty-one existing homes were slated to be moved, and three hundred and forty-nine new ones built, as well as three dams, one each at Iroquois, Long Sault and Cornwall. The seven vanishing villages would be rolled up into just three, two with new names. These would be Ingleside (the new home of Dickinson's Landing, Wales, Farran's Point and Aultsville), Long Sault (Moulinette and Milles Roches) and a new town with an old name, Iroquois, where the local historian, Beryl Morrison, would be given the task of naming the new streets.

According to the Environment Canada website, part of the restructuring of the St. Lawrence River around Long Sault for "ship transport and hydroelectric power" also managed to throw off the natural ecosystem of the area. The alteration of the waterways and surrounding terrain reduced the river fish, as well as large amounts of land owned by the First Nations along the shoreline, and introduced hazardous material into the water, thus threatening the health of the remaining fish, and the Mohawk themselves, whose livelihood depended a great deal on the St. Lawrence River.

The Long Sault sucks
astonishment into a jaded lung.
The trees, the bald cat, and the telephone
hang on the inhalation till he coughs.
Goddam, he says at last, the absence of a wire
whangs there like a goddam tambourine.
That’s better son, she rocks, you just
keep on knitting them like that.

If you travel down to Morrisburg, you can tourist around a building with various histories of the old villages and lost towns. Why is it, through the poem, McKay highlights the loss of these villages, a shoreline that lasted thousands of years, and a way of life for hundreds of people, but provide few solutions or even answers? Is this but documentary of what we already know happened?
Posted by rob mclennan at 10:00 AM
Labels: Brick Books, Don McKay, Glengarry, Long Sault, Phil Jenkins, Stan Dragland