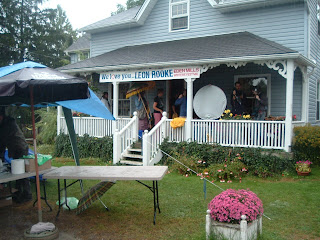 On Sunday, Christine McNair and I wandered around the 20th anniversary Eden Mills Writers' Festival, just near Guelph, Ontario. McNair (I produced "poem" handouts by myself and McNair for the event) was heading there anyway, and let me tag along with her and friends Amy Dennis (we picked her up in Burlington) and Abby Whidden (who was reading in the Fringe category, and we picked up in Toronto). I had never been to Eden Mills before, despite many years of wanting to go, and it was raining when we got there. Eden Mills is such a pretty little town. Apparently the whole town loves Leon Rooke. In front of "Jenny's House," which was also used as the festival "hospitality suite" for the various authors, there was a banner that said "We Love Leon Rooke." I mean, who doesn’t? 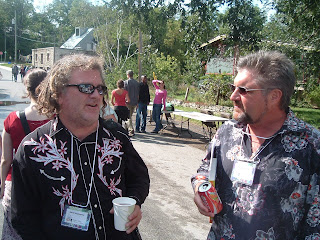 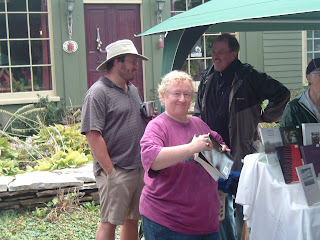 [Kitty Lewis, looking adorable] Check out more photographs I took here, hiding out on facebook. Now we go through some of the other events coming up (including a reading I'm doing), before the ottawa international writers festival starting October 18th with the festival book fair, yes?
Posted by rob mclennan at 12:45 PM
Labels: photos, report