WELCOME TO EARTH, poems for alien(s) by Amanda Earl 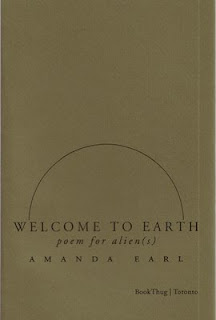 for those whom the first is water

what they know they know from swimming & from rain

this is how to learn to continue

this is how to find quench drip

falling heavy in the body a flood

Ottawa poet, editor, blogger and publisher Amanda Earl [see her 12 or 20 questions here] have really been coming into her own as a writer over the past couple of years, and perhaps the best example of her writing so far has to be her new chapbook WELCOME TO EARTH, poems for alien(s) (Toronto ON: BookThug, 2008), on the heels of such publications as the poems Eleanor (above/ground press, 2007) and The Sad Phoenician's Other Woman (above/ground press, 2008), as well as a series of chapbooks self-published through her own AngelHousePress, including deadstreet Gallery presents (2007), 8 planets speaking in tongues (2007) and postcards from the museum of the broken (2007).

the shape of words

the dreams you hold behind your eyes

light you swallow light you drown in

suffocate you in light

you life to learn

the soft light of dawn

you learn time through

you in the dark

Earl, co-editor and co-publisher, along with her husband, Charles Earl, of Bywords.ca and the Bywords Quarterly Journal, is part of a group of Ottawa poets that have been developing over the past few years slowly working on writing, and some of which have also been getting attention for their works, whether Pearl Pirie starting to publish in little magazines here and there, Roland Prevost's forthcoming chapbooks with Dusty Owl Press, Marcus McCann's forthcoming chapbook with Edmonton's Rubicon Press, Rhonda Douglas' first trade collection newly out from Signature Editions, Max Middle as the only Ottawa contributor in the Shift & Switch: New Canadian Poetry anthology from The Mercury Press, Ottawa ex-pat Jesse Patrick Ferguson's first trade collection out next year with Freehand Books, or even some of the work happening with Chaudiere Books (both Marcus McCann and Max Middle have first trade collections forthcoming with the press in 2009).

Earl has made some interesting forays the past year or two into the long poem/sequence, with her work in such far stronger than many of her individual poems, able to stretch an otherwise ordinary piece, phrase or idea into something far wider, and far more expansive and subtle through extended movement. Part of what I find interesting with Earl's writing is her willingness to be open to new ideas and new influences, based on her own reading. For example, she spent part of last winter writing a long poem influenced by Alberta writer Robert Kroetsch's The Sad Phoenician (Coach House Press, 1983; included in full in his Completed Field Notes, University of Alberta Press, 2002), published a few months later as The Sad Phoenician's Other Woman. This new publication, WELCOME TO EARTH, poems for alien(s), is made up of fragments that are held together through the links that tenuously hold, through "every molecule passed between / the sea dirt pearl shale stone sighs shaped" (p 9), and one of a series of chapbooks that have come out of the press over the past few years, in editions of one hundred copies. But I wonder, why doesn’t this graceful little chapbook include an author bio?
Posted by rob mclennan at 11:00 AM
Labels: Amanda Earl, BookThug