Edmonton: (some of) the past few days 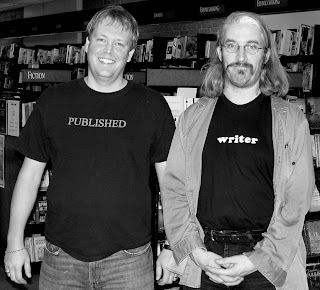 This is a photograph of Ottawa writer Christian McPherson and I after the reading we did together at Audrey’s Book (photo courtesy Jeff Carpenter). I think my t-shirt (I had it made before coming west) is far cooler than his (even though I don’t care for the shape of my head). Not a large crowd, but certainly an appreciative one, the first time I’d read in that space was nine years ago through the ottawa international writers festival and their Great Canadian Via Rail Tour (the staff even remembered me from that); ask David McGimpsey about the vodka paralyzers and about what happened next. Ask kath macLean. I’m not saying a word on-line.

I read selections from The Ottawa City Project (2007), and sex at thirty-eight: letters to unfinished g. (2007) as well as a selection of poems I’d written since arriving in Edmonton. The only book I sold was to McPherson; what? And then we drank. But why did we go to that terrible bar first?

The third bar had karaoke. I was brilliant and completely awful; we have to do that again.

In a packed house at Convocation Hall, Nobel Prize Laureate (the second I've met in a week or so, after Roald Hoffmann) Derek Walcott gave a too-short reading and answered questions. Why didn’t I take notes at this event? I would love to get in this space when someone is playing the pipe organ; even to look around the room was music enough. There was much discussion on the responsibility of the artist being aware of and responding to the immediate world around him/her, which I found particularly interesting, and this man certainly has walked the walk for many years. A compelling man and compelling speaker. Why didn’t I take notes at this event (I saw Christine Stewart take notes during the whole thing, but she won’t let me read them, let alone post)? At the reception, on my way out the door, I slipped a copy of my red earth (2003) to Walcott before he left.

I went to the WILD PROSE COUNTRY reading at The Black Dog Freehouse on Whyte Avenue, organized by powerhouse T.L. Cowan, with readings by her, Thea Bowering, Laura Crawford, Rebecca Fredrickson and Kathryn Payne. Apparently this is an occasional series they do around town for fiction writers; I think they should do it more often, an interesting counterpoint to all the poetry that keeps happening around town.

It’s been years since I’ve even seen Kathryn Payne, let alone heard her read, since the publication of her first poetry collection, Longing at Least is Constant (1998), came out with Broken Jaw Press. Can it have been that long? Even longer since I published her first chapbook in 1994, with a launch at SAW Gallery that included readings by Louis Cabri and some songs by a friend of Payne’s, Ember Swift. It was good, too, to hear Thea Bowering read, from a story published recently in The Capilano Review. I was actually able to publish a poem of hers back in 1993 (that later went into her section of the first Breathing Fire), but hadn’t actually heard her read until now. Just how long should someone wait?

And Laura Crawford is just amazing; she could give just about any spoken word artist in the country a run for their money. She deserves a line here all to herself. Himself?

Hosted by the Environmental Research and Studies Centre at the University of Alberta, Jan Zwicky did a lecture and reading on the topic of “what role can lyric poetry play in addressing environmental crisis?” Speaking on poetry as the combination of science and thinking, there felt even echoes of the earlier talk that Anne Simpson gave at the Edmonton Poetry Festival [see my note on such here], with the inference (through the promotional material) of being engaged in a wider scope of poetry even as scientific research (something that Christian Bök has been engaged with for years).

It was interesting to have Zwicky talk as an Albertan, even though, as she said, she grew up just west of Edmonton but hadn’t actually read here in quite a long time. She said that to shift perception, we have to “shift our rhetoric.” To move in a language, she said, you can get trapped in the limitations of that language.

As she wrote on the board before we arrived:

Living Canadian poets whose work speaks directly of their love for and involvement with the natural world.

With two others added:

She read poems from her Songs for Relinquishing the Earth (1999) and Robinson’s Crossing (2004), the second of which, she said, was written very consciously as a reaction to environmental concerns, and the family farm just west of Edmonton that existed as part of that “100 year failed experiment in white colonialism” that was long over. We are needing a new language, she said, for a new perspective (but then why not acknowledge the language poets, I wondered?). A poem a day or even a week would change thinking.

She talked about the “end of nature,” and that there was no longer any thing that could be called nature. “Poetry, I believe can help us say… authentically, how bad we feel; that it ain’t over.” She talked about how the genius of poetry was in the integration of thought and feeling, and that she wanted to build community on the back of elegy (“elegy is the flip-side of praise”).

As interesting as the talk was, she still held her talk within the realm of one kind of writing, which I found disappointing. Why not bring in other styles of poetry doing shades of the same thing? Why does the notion of elegy and love only exist within one form? She seemed very open to other forms within other arts, praising the photography of Edward Burtynsky as something that was made as a reaction and provokes thinking through a simple form, but aren’t there other kinds of poetry doing same? Again, what of the language poets, working through the language itself to find new meanings and new perspectives? Why were all of her examples on the board working the same kind of lyric?

Upcoming: The Edmonton International Literary Festival, October 11-14; Elizabeth Bachinsky at U of A on October 30; a talk/reading I do for the Writers Guild of Alberta on Hallowe'en (???), more info tba;
Posted by rob mclennan at 5:23 PM
Labels: Christian McPherson, report, rob mclennan photo