the past few days; readings in edmonton 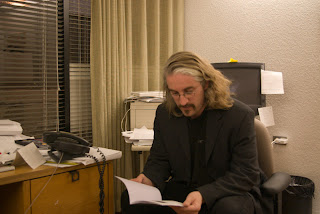 This is a photo of me in my little office on-campus, courtesy Stephen Brockwell... unfortunately you can't see the mounds of paper all over the floor or the stacks of books and envelopes... 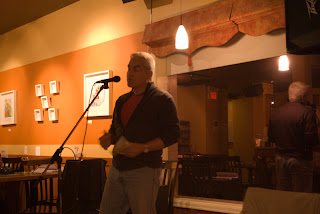 Ottawa poet Stephen Brockwell [see his "12 or 20 questions" interview here] was through town to read for the Olive Reading Series, launching his Olive chapbook from Impossible Books (2007), as well as his fourth trade collection, The Real Made Up (ECW Press, 2007). Not the biggest crowd (given it was immediately post-Thanksgiving). When Stephen reads well, he reads extremely well, and this was one of those times, engaging with the audience, and reading from new pieces that engage with voice in pretty interesting ways. He talked about working his new collection as “memisis, or imitation” and about how “the public mind displaces language.” I very much look forward to getting a copy of his new book when I’m back in Ottawa and getting into it further, deeper.

from A Guide to the New Flora of Cornwallis Island

at the roots of dwarf northern oaks
fungi evolve to spore in human tea
boot-deep in an unimaginable bog
shirts off, backs gleaming, humid

We tried to find a karaoke bar afterwards (after a bit of time at The Black Dog) but got distracted by some other things. And of course, well before the reading, he arrived at my office and I made him take pictures... (since I might never have an office again in my life) 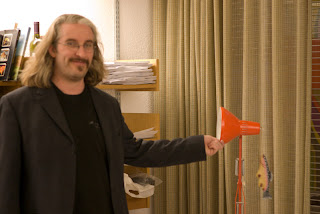 With Alice Major’s help, we had a little going-away party for Edmonton poet Jocko Benoit, who leaves at the end of the month for Washington D.C. (for the sake of a relationship); after all the work he’s done around town over the past two decades (he moved to Edmonton in 1988) it seemed the least the city could do for him, was give a little bit of love before he moves south. I even made a broadsheet of a poem of his, so he could have a handout in his new digs.

When It Came Down, It Really Came Down

In the wake of the meteorite that killed
Millie Wentworth, astronomers
Were blamed for their irrational numbers,
Then government faulted for inadequate
Funding of telescopes on every block.
The rebuttal that Millie was killed
In an open field led to interrogations
Of all those who’d let her walk home
At night when a meteorite was more likely
To sneak up on her with its rakish
Whistle of death. This led to a by-law
Insisting citizens practice defensive walking –
Each hesitant step married to skyward gaze,
Though after hospitals cramped up with
Twisted ankles and stumble-wrenched knees
A step and downward glance
Was added to the binoculars-optional dance.
And several groups popped up with evidence
Of how TV was to blame.

Her insurance company forced the Vatican
To testify to the verity of God’s
Clumsy hand slinging star shards around.
The blue of the sky, in everyone’s eyes,
Was the color of choking before
The black of night – its face
Maggot-pocked with wormholes.
Meteorite reports followed those for
Wind chill, smog and UV. In the end,
People rightly stopped blaming each other
And joined in blaming the sky,
Because when it fell, it really fell –
And all passages in poems and plays
That referred to sun, moon and stars
As beautiful were stricken
From school textbooks so no child
Might be inappropriately mesmerized
By the glittering dots or try to connect
One to another in pictures that said more
About the child than about the cosmos.

A good evening; afterward we went to the Garneau for drinks, a couple of us; for a guy who doesn’t actually drink, though, he managed to keep spilling my drinks on me more than any of us could find reason…

Last night I went to LitFest: Edmonton International Literary Festival, which bills itself as “Canada’s only Creative Non-Fiction Festival.” Why is it I’ve never heard of this festival before? I’ve certainly heard of Montreal’s Blue Metropolis (WHY WON’T THEY INVITE ME TO READ?), The Calgary-Banff Wordfest (why won’t they invited me to read?) and the Vancouver International Writers Festival (why won’t they invite me to read?), but not this one. Billed as “Hot North,” the event at The Sutton Place Hotel (Rutherford Room) was co-hosted by the very charming duo Ted Bishop and Todd Babiak to a nearly-packed house (including authors such as Shawna Lemay and Myrna Kostash, neither of whom I’d had a chance to meet previously; I even got Kostash to sign my copy of her first book, All of Baba’s Children [see my previous blog entry on her here]). Babiak talked about (something referenced by a couple of other people throughout the reading) the “challenge” put forth at last year’s festival by John Ralston Saul through PEN Canada for the sake of free speech, anti-censorship, an idea that came to fruition (one of the ways it has, apparently) through the appointment of Jalal Barzanji as Edmonton’s first writer-in-exile. Babiak [see his "12 or 20 questions" interview here] referenced, too, how one of the recent Alberta premiers (not the most recent one) had even tried to censor The Edmonton Journal and its Calgary equivalent, pushing them to write positive and not negative editorials; apparently The Edmonton Journal even got a Pulitzer Prize (the first awarded to a newspaper outside the United States) for refusing to be compromised.

Author Ken McGoogan (it was good to see him again) read from his book about the Northwest Passage and the doomed Franklin Expedition, Fatal Passage (I tried to convince him to sing the song but he wouldn’t do it; at least, not there, he said). A good opener; McGoogan is a strong, compelling reader, which was a great way to start, but unfortunately, didn’t work out with the soft-spoken Annette Woudstra as follow-up. She’s so quiet and low-key, the fit didn’t fit (and I could barely hear her). What I could hear was pretty interesting, from a first book of essays , The Green Heart of the Tree, Essays and Notes on a Time in Africa (University of Alberta Press).

The biggest reason I was there was to hear Janice Williamson, who read a piece on Burma and Burmese action, including the protest she was part of at the University of Alberta on the Saturday of the Thanksgiving weekend. It was interesting to realize just how much Williamson is a passionate writer, and how much her detailed (and well-researched) thoughtfulness manages not only to not diminish that passion, but instead bring it out further. She talked about Doris Lessing doing the Massey Lecture in 1985 and talking about the “prisons we choose for ourselves,” and how “literature as a kind of tonic against madness,” even quoting the short Bertolt Brecht poem “Motto,” that reads:

She talked about her ten-year-old daughter being a part of the “day of action” with her, who was but a few feet away from her, listening; I think Janice’s daughter, when she gets older, will probably have extremely interesting things to say about growing up in such a household.

The best part, in many ways, of going to an evening such as this is being able to hear authors who I otherwise would probably have either never heard of or overlooked; Toronto author and journalist Marian Botsford Fraser read a piece of hers that had been published in Granta 83 (“This Overheating World”), the piece “Bone Litter.” There aren’t that many readings or pieces that make me go “wow,” but this was certainly one of them; an “impact piece,” as she called it.

It was interesting, too, to hear Montreal writer David Solway at this festival; he and I had a conversation during the break. I told him my frustrations with his pseudononymous work being “outed” in print by Joel Yanofsky. I remember it feeling very offside at the time; very cheap, even. What exactly is the anti-pseudonym bias that makes one want to “out,” and thus, giving the permission to dismiss the entire work, the entire project and point? How exactly is this "hoaxing," or "pulling wool over," exactly? I have never understood. Solway read a couple of pieces from his poetry collection Franklin’s Passage, referencing Ken McGoogan (a good close that met itself back at the beginning). He talked about the north and about the formulation of north (“its cold”); the, as he called it, “semiotics of representation.” When he said that, I thought it interesting too, that really, if you go south enough, wouldn’t it be equally cold?

It reminded me of Nancy Huston’s book Losing North: Musings on Land, Tongue and Self (Toronto ON: McArthur & Company, 2002):

To be disoriented is to lose the east.

In French, “losing north” means forgetting what you were going to say. Losing track of what’s going on. Losing your marbles. It is something you should avoid at all costs. Something that’s always spoken of negatively, to say that one hasn’t done it. “My, he certainly doesn’t lose the north, does he?” is the way the expression is used. Never “Ah, too bad – he’s lost the north.”

To be all abroad is what my excellent French-English dictionary suggests by way of translation. An expression which, taken literally, means to be in a foreign country. But if, in turn, you take the English-French dictionary and look up the expression To be all abroad, what you find is to be scattered every which way, or to the four winds, to talk twaddle, to be off one’s rocker – which is not at all the same thing!

Dictionaries confuse us, they lead us astray, they plunge us into that frightening magma between languages, in which words lose their meanings, refuse to mean, start out meaning one thing and end up meaning quite another.

The North is what I intended to say.

What I should have said. Theoretically. What I was supposed to say, in the event that I had something to say.

And then, after the readings, a couple of us retired to the hotel bar, only to find Ottawa’s own Tom Green playing guitar and singing songs; apparently he’s here for an entire month filming a movie with Chrispin Glover (who, fortunately or unfortunately, wasn't part of Tom's small group at the bar). How small a world is that? We talked for a little bit (why do I find it so surprising that anyone remembers me at all?), and thought about just how long ago it actually was when I was a guest on the Tom Green Show back on Rogers Cable 22 (1995; the third “poem” leaflet I produced was actually a handout for his studio audience).