12 or 20 questions: with derek beaulieu 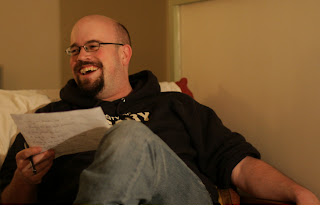 derek beaulieu's three books of poetry all engage with textual production and the way that composition informs comprehension. His first book, with wax, was published by Coach House Books in 2003, and was followed-up by frogments from the frag pool: haiku after basho (Mercury Press, 2005) co-written with Gary Barwin. His most recent book is fractal economies (talonbooks, 2006) which explores the relationship of meaning-making between the author and the reader through non-semantic concrete poetry. His next volume, flatland, is forth-coming fall 2007 from Simon Morris' highly acclaimed press informationasmaterial.

beaulieu is also a co-editor of the controversial, best-selling anthology Shift & Switch: new Canadian poetry. He has been an editor of filling Station (1998-2001, 2004-present), dANDelion (2001-2004) and endNote (2000-2002) magazines. His small press housepress (1997-2004) published over 250 publications and is now archived, in its entirely, at Simon Fraser University. He has lectured about small press, community and poetics in Canada, the US, Iceland and the UK, and has been published by over 80 journals world-wide. His artwork-which engages with text and readability-has been shown in group and solo exhibits across North America.


to be succinct: it showed me how much i had to learn. and it showed me that the process of developing a poetic and a praxis is a lifelong process.


ive lived in Calgary for about 26 years now, having moved here from Montréal when i was a kid. Calgary's 'official verse culture' has been a trouble spot for me, a version to push against. In the face of the conservative politics rampant in Alberta, and the cultural embracing of rurality, geography, and place, there is a coterie of poets in Calgary whose work rejects these aspects in favour of what Sianne Ngai categorizes as a "poetics of disgust"(98). These poets - as typified in the work of Jordan Scott and ryan fitzpatrick (and others loosely gathered around filling Station and dANDelion magazines) - push against the modernist tropes of "prairie poetry" in favour of a more urban, linguistically disruptive form that can articulate the dissatisfaction with the politics being forwarded in historically "typical" representations of Alberta. Race and gender -- while not specifically addressed in my work -- i think are present in the underlying awareness of the default politicization of language and the way that language forms thought and expectation.


depends on the project -- i have worked on stand alone pieces (which have eventually been gathered into larger projects, like fractal economies), but i have also worked on longer book-length manuscripts (like my forthcoming flatland).


In my own practice concrete poetry is not a score for oral performance and is not meant to be articulated in sound. While the concrete poet cannot control how the reader will approach - or even perform a text - it is my aim to step away from performance of these poems in order to further complicate the exchange value of poetry. While 'value' and 'commodity' are never completely escaped, its transferal can be troubled by the removal of the verbal from the communication equation. This refusal to participate in the oral performance of concrete poetry by rejecting the idea of the visual poem as score for orality - and the composition of concrete poetry itself - relates to Sianne Ngai's idea of a poetics where "disgust, and not desire, is our most common effective response to capitalism and patriarchy". A poetic of disgust includes both the "the figure of the turn, or moment of exclusion [.t]he movement away from the object as if to shun it" and the "negative utterance". I extend Ngai's formulation of the "inarticulate sound" to print-based media as well as the 'inarticulate mark'. Ngai suggests that one of the articulations of disgust is the "inarticulate sound" where "[n]o words are used in the expression of disgust and thus the question of what words 'mean' is simply irrelevant to this particular type of utterance". Concrete poetry - the 'inarticulate mark' - treats language as "raw matter" without a reinforced referent as a means to briefly interrupt capitalist exchange-based signification. The 'inarticulate mark' of concrete poetry ultimately expresses a poetics of disgust and exclusion, where its language "only covers a space; the reader cannot fix it metaphorically, assign a concept to it, nor send it on a metonymic voyage along a chain of other terms".


5 - Do you find the process of working with an outside editor difficult or essential (or both)?


the editorial process is simply part fo the writing process -- and i am fully dedicated tot he processual in poetry, the act of writing, the act of creating. i think that the community in calgary has demanded a strong editorial eye.


6 - After having published more than a couple of titles over the years, whether trade books or chapbooks, do you find the process of book-making harder or easier?


I cant say that i remember, altho i eat probably a banana a day.


8 - What is the best piece of advice you've heard (not necessarily given to you directly)?


just becuase someone hands you a bucket of shit doesnt mean you have to take it.


9 - How easy has it been for you to move between genres (poetry to non-fiction)? What do you see as the appeal?


the only non-fiction i write is into the form of book reviews and papers on poetics and poetry -- and the move from one to the other is barely a move at all, poetics and poetry (product and praxis) are linked and the discussions feed eachother. i think that as poets we are responsible for adding to the level of discourse around poetry, and for challenging our fellow writers to push themselves. if we dont hold outrselves accountable, then who will?


well i dont have a typical writing day otehr than probably 6-7 hours at the computer a day (more on the weekend), which includes writing interviews such as this one, correspondence, submissions, addressing issues around filling Station and No press. Somewhere in there is some creative writing, although that rarely occurs at the computer -- usually at the kitchen table.


i think that flatland is more fully-realized than my previous projects, and one that most represents where i am headed poetically.


the biggest influence these days on my own work is both other poets (dworkin, bok, mcpherson-eckhoff, queyras, cobbing, and more) and novelists (beckett, joyce, stein, ewart, markson, et al) but also visual artsists (especially minimalism and conceptual art), but also music (these days a lot of wilco, steve reich, radiohead and more), but rarely film or television -- i rarely turn on the televison except to watch hockey night in canada.


more travel for sure.


15 - If you could pick any other occupation to attempt, what would it be? Or, alternately, what do you think you would have ended up doing had you not been a writer?


well in addition to my writing i am also currently training to become a high school english teacher, so id have to say that it enters in this question for sure.


16 - What made you write, as opposed to doing something else?


comic books and bpNichol's work made me feel ike it was ok to write...


the last novel by david markson, the amazing adventures of kavalier and clay by michael chabon... and i havent seen a truly great film in ages.


18 - What are you currently working on?


i have several projects on the go, but mostly non-fiction, critical pieces: a keynote address for the Oslo poetry festival, a paper for a conference in Peterborough on performance and visual poetry; but also seeing flatland through the press and beginning to compile chains which is forthcoming spring 2008 from paper kite press... but also occasional concrete pieces and a short autobiographical prose piece which doesn't seem to be finished as of yet.