He worked for the city & early one spring morning
still dark out, he took me with him
to collect the still-burning oil lamps
from the road construction & put them in the back of the
truck.
Still burning? Or extinguished, I don’t recall

— and the privilege I felt, wordless in the front seat,
sitting still, being good
to deserve this honour, to be woken and taken out
so early with no one around but us

as he gathered the heavy sooty lamps
that guarded during the night the still-soft asphalt
of repaired pot-holes and altered curbs. 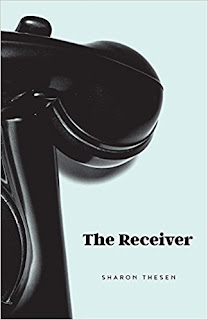 B.C. poet and editor Sharon Thesen’s latest poetry title The Receiver (Vancouver BC: New Star Books, 2017), a collection of lyrics and prose-poems, some of which focus on family and memory, reminiscent, slightly, of George Bowering’s Autobiology (Vancouver BC: Georgia Straight Writing Supplement, Vancouver Series #7, 1972), working through how stories are told and retold, and shift in both telling and memory, sometimes deliberately, and often harden into those variations, some of which are very far from the facts. Set in five sections – “The Receiver,” “My Education as a Poet,” “Around then,” “Charles, Frances, Ralph, and Me” and “Book of Motz” – the first three sections evolve from a lyric exploration of family histories to more literary matters, akin to the essay-poems of, say, C.D. Wright (a quote by Wright is one of two that opens the collection) or Anne Carson. Thesen visits and revisits, reexamining her own memories and influences, from family to writers, in poems that write of visiting her mother, recollections of her youth, or the poets Shelley and Anna Akhmatova. Not that any of this is a new thread in Thesen’s work; one might even suggest that these are the foundations upon which Thesen’s work exists, but there is something about her view, perhaps, that is bringing new elements to light here. Particularly curious is the inclusion of the poem “The Pangs of Sunday,” a piece that shares a title with her first volume of selected poems, published in 1990 by McClelland and Stewart (a title that is otherwise unseen throughout the selected). Did it take this long for Thesen to complete the poem?

The Pangs of Sunday

You’d go to Banyen Books on Sunday afternoons,
a searcher after meaning. So much meaning, so
little time! Was it to be mental or physical, your
ailment, in the end. In the end the ailment revolved
around love, mental or physical. Across the road
was the health food store, the herbalist, and the pains
and the ills of real estate & car insurance even though

it was a matter of proximity
and luck, how you arrived anywhere with no one
to witness and adjust, no one to drive the car. I
could get my fortune told in the sweet
cafe of Sunday by the woman with the bangle bracelets
and the low voice and the black, tangled hair – who else
to believe? — you only hoped your tip would be enough
to jumpstart the engine of your happy fate idling
while you got settled with your purse, etc,
and turned up the volume on the radio.

Although this isn’t the most interesting in the collection (my preference remains with the longer prose poems over the shorter lyrics), but it furthers the throwback element that Thesen presents in the book as a whole. Really, Thesen’s The Receiver is an intriguing blend of the past and the present, composing poems that work to revisit and reconsider her history, memory and influences, as opposed to simply repeat or re-hash, as she manages perhaps her strongest collection in quite some time, going back to News and Smoke: Selected Poems (Vancouver BC: Talonbooks, 1999), A pair of scissors (Toronto ON: Anansi, 2000), or even my personal favourite, the intimate smallness of Aurora (Talonbooks, 1995). An interesting direction to the collection emerges through the last two of the five sections, as the fourth is an essay exploring that game of telephone the book’s title suggests, “Charles, Frances, Ralph, and Me,” that begins:

The recent fracas that followed an audience “question” about how Black Mountain College could call itself progressive when it was patriarchal, racist, and white (following a four-part panel discussion at the Black Mountain College exhibit in Los Angeles), as well as my own very recent visit to the exhibit, had precipitated some memories and feelings about my long association with the late Ralph Maud as co-editor of the two editions of the correspondence between Charles Olson and Frances Boldereff. You might say “patriarchy” was the underlying theme, in both theory and practice, not only of the correspondence but also of Ralph’s and my relationship as we slowly transcribed and published the letters. The bickering, the disputes, the discussions centred mostly on how “crazy” Boldereff was (Ralph) or why she may have, legitimately, felt Olson was exploiting her (me), mirroring uncomfortably Ralph’s and my working arrangement.

While I don’t know about the “recent fracas,” the essay is a curious element to the collection; while it fits thematically, it feels an odd inclusion, in that perhaps the essay should be given more prominence for its exploration of Olson scholarship, and Thesen’s long-standing relationship with and work upon same. And yet, the essay fits perfectly, furthering her interest in reconsidering how and what stories are actually told, working to give Frances Boldereff’s relationship and correspondence with Olson the proper exploration and understanding. The final section, “Book of Motz,” is subtitled “Conversations with Frances Boldereff,” and appear to be exactly what they say they are. In this section of short pieces, Thesen herself becomes the receiver, and allows a credit to Boldereff in the best way, one might say, possible: through her own words. It suggests there is far more work to do on Boldereff, and her relationship to Charles Olson and his work. One might hope this is the push required to get that moving.

The Real Theatres of Pittsburgh

“There was this Irish Catholic guy. I begged him to go to bed with me. His father owned all the real theatres in Pittsburgh. Eva Galleon entertained at their elegant house, a limestone mansion. Real black marble floor. The ritzy dog on the front seat beside the chauffeur. The beautiful library upstairs. His little shrinking ascetic mother.”