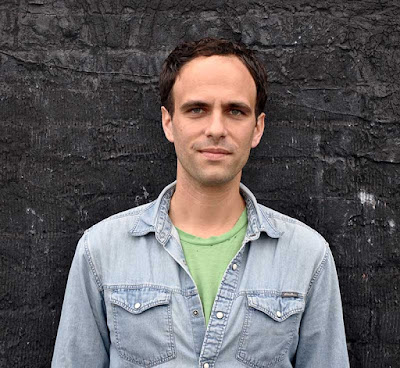 Daniel Poppick is the author of The Police (Omnidawn, 2017). His poetry appears in BOMB, The New Republic, Granta, Hyperallergic, and Fence. The recipient of fellowships from the Corporation of Yaddo, the MacDowell Colony, and the Iowa Writers' Workshop, he currently lives in Brooklyn, where he co-edits the Catenary Press.

1 - How did your first book change your life? How does your most recent work compare to your previous? How does it feel different?
I wrote The Police slowly, over the course of about seven or eight years--concurrent with my figuring out why one would throw their life into this kind of art-making in the first place, a basically wasteful overflow of language and form that paradoxically helps us articulate some of the best (and worst) of what we are as a species. It felt like being radicalized as it was happening, but maybe it was just growing up. The arc of the book is basically one of figuring out what questions to ask--what the title is doing for example, as I've talked about elsewhere a bit, among other questions--and the result is that the poems are often syntactically and emotionally thorny. It feels weird to talk about it as if I know what they're doing, because I wrote a lot of these poems explicitly to externalize joy or dread or whatever that I didn't understand.

In the poems I'm writing now I'm more interested in how narratives with longer arcs, rather than thorny syntax, can do the same thing. Like how can a poem be lyric if it's narrative prose? What else can be lyric?

2 - How did you come to poetry first, as opposed to, say, fiction or non-fiction?
I actually didn't come to poetry first. I wrote fiction throughout high school and college and thought poetry was alienating and dumb until I was about 21, then suddenly it was the only way of processing language that made sense. Poe and Calvino and Shakespeare sort of led me off the path, and then Emily Dickinson, Wallace Stevens and a small handful of anthologized Marianne Moore poems did me in.

3 - How long does it take to start any particular writing project? Does your writing initially come quickly, or is it a slow process? Do first drafts appear looking close to their final shape, or does your work come out of copious notes?
It takes a year or three for me to figure out how a group of poems works together, and longer to figure out if it's worth following that thread. But as for individual poems--I write almost everything in prose longhand in my notebook and then break it into lines later, which keeps me from becoming too fixated on a particular of enjambment or form or word. Poems like "Paradise" or "A Rubber Lion" for example began as paraphrases of their final versions, and then in breaking the lines they grew out from the middle. My obsessive tendencies can gum up the works so I'm basically always trying to subvert them, sometimes obsessively.

4 - Where does a poem usually begin for you? Are you an author of short pieces that end up combining into a larger project, or are you working on a "book" from the very beginning?
I seem to not know what's going to be a book until it's at least half written. Same principle as for individual poems--I have to trick myself into not fixating on any one idea of a book too much to let a coherent spirit take over that lets me see the arc.

5 - Are public readings part of or counter to your creative process? Are you the sort of writer who enjoys doing readings?
I love readings. I even love boring readings, though the ones that aren't boring are usually better. It's a way for poems to have a parallel, embodied life to what's on the page. The fact is that at least half of the people who go to a reading probably won't read the book, so in some ways this moment you have in a room with people in real time is more important for the life of a poem than written text.

6 - Do you have any theoretical concerns behind your writing? What kinds of questions are you trying to answer with your work? What do you even think the current questions are?
I have to admit that "Why do we keep doing this against the certainty of death?" is pretty much the first and last question informing my reading and writing these days. It might sound fatalistic, but it's just the opposite.

7 – What do you see the current role of the writer being in larger culture? Does s/he even have one? What do you think the role of the writer should be?
There's a well-documented inventory of diabolical shit happening in the name of capitalism and patriarchal white supremacy--art can play a role in helping us get free, or maybe it can't; so one role the writer might have is figuring out if or how it can. And if we're going to try to take that on, while we're at it hopefully we can channel some joy into the process.

8 - Do you find the process of working with an outside editor difficult or essential (or both)?
Essential! Gillian Olivia Blythe Hamel was my editor at Omnidawn and whatever the book became is because of her. She saw the outer edges of what it could do and be before I did. I co-edit the Catenary Press with Rob Schlegel and Rawaan Alkhatib, and when we work with poets on their chapbooks we like to let them determine our involvement. Gillian stepped up in a way I didn't even know to ask for. The Police is maximalist, and at one point it could have become narrower and more distilled. Gillian taught me that the shorter, more distilled book could come next, but that this one had to be big. That was her influence, and it clarified a lot for me, including what I'm writing now. I'm very grateful for it.

9 - What is the best piece of advice you've heard (not necessarily given to you directly)?
It's a question, not advice: "What is the question you would like to be asked right now?"

10 - What kind of writing routine do you tend to keep, or do you even have one? How does a typical day (for you) begin?
I work an office 9 to 5 these days to pay the rent, which means that I need to make a very pointed effort to keep writing and reading a part of my life. I try to leave at least an hour or so in the morning for reading. I write in fits in starts when I can. That tension can be useful. Being a poet in a regular workplace often feels like low-key cosplay.

11 - When your writing gets stalled, where do you turn or return for (for lack of a better word) inspiration?
Walking outside and/or music.  Lately I've been listening to this and this and this (RIP Jessi Zazu).

12 - What fragrance reminds you of home?
Grass?

13 - David W. McFadden once said that books come from books, but are there any other forms that influence your work, whether nature, music, science or visual art?
If I could compose music I would probably be doing that instead of writing poetry, and following something like the Goldberg Variations or Donuts very closely (am I allowed to say that Donuts is the Goldberg Variations of hip hop?) loosens some of the strictures that I unwittingly bring into writing.

14 - What other writers or writings are important for your work, or simply your life outside of your work?
Lately anything by Callie Garnett and Christian Schlegel. Chris's first book Honest James sort of knocked me over as I was finishing The Police, and the poems he's been working on since I find almost inextricable from where my head has been in the last year or so. I recently saw a mind-blowing performance by Adjua Gargi Nzinga Greaves. Beyond them, I've been reading Fred Moten, Lisa Robertson, Bashō. John Ashbery.

15 - What would you like to do that you haven't yet done?
Write essays about music.

16 - If you could pick any other occupation to attempt, what would it be? Or, alternately, what do you think you would have ended up doing had you not been a writer?
I love teaching.

17 - What made you write, as opposed to doing something else?
It gives me a feeling of wholeness while frustrating any idea I have about what completion might mean, and pretty much nothing else does that for me.

18 - What was the last great book you read? What was the last great film?
The Narrow Road to Oku, by Bashō (translated by Donald Keene); and Nicholas Ray's They Live by Night. I also watched Terminator 2 a few months ago for the first time since I was a kid. It's great until Arnold gives the thumbs up from under a pool of molten steel. Is that a spoiler?

19 - What are you currently working on?
My next book, which is anchored by a series of haibun.