begin the discovery elks at any lost historic rail line in the cliffs of query, salmon, beltline & gardens, with leisure spaces in your shortage of drinking water & poker hand

lift the Vale of Avoca bridge as a substitute for a test pattern or to straighten street; or leverage the bright water’s rust

The second volume in Shannon Maguire’s projected medievalist trilogy is Myrmurs: An Exploded Sestina (Toronto ON: BookThug, 2015), following on the heels of her debut collection, fur(l) parachute (BookThug, 2013) [see my review of such here]. As the press release informs, this new collection “is an innovative variant of the sestina form (a medieval mechanism of desire that spirals around six end words).” As part of an interview-in-progress forthcoming at Touch the Donkey, she opens a conversation on the trilogy as a whole:

I’ve been gradually working on the third book of my “medievalist trilogy”—right now I’m calling it Zip’s File. That’s where the poems that you’re reading here come from, and I’ll say more about them in a moment, but first I feel I should say something about the books that precede it because all three tease out one aspect of a larger question that I’ve been trying to work out, which is something like: How has Western culture influenced the literary, cultural, sexual, and political bodies that we’re living inside now and what role did/does the English language play in transmitting, producing, circulating, and maintaining gender, racial, and sexual difference? And how does change come about, linguistically, socially? Since (dammit Jim) I’m a poet and not a social linguist, my research has to be conducted and reported in poetic form... whatever that is! bpNichol’s statement (borrowed from Ludwig Wittgenstein and modified) “word order equals world order” is tremendous because it emphasizes the practice based/ processual effects of object-relations. So, modern English is a Subject-Verb-Object language, where the subject is grammatically assumed to have agency and the object is grammatically assumed to be passive. We make it “easy” to tell who is doing and who is being acted upon because it’s built into the spacial dimension of our sentences: they start with the actor and end with the...patient. But Anglo Saxon or Old English grammar was less obvious in terms of how it appeared on the page. Like Latin, the dominant Western language of commerce and authority at the time, Old English was a highly inflected language meaning that it had eight possible cases (or forms) that any noun could take, and a noun’s relation to other parts of speech depended on which form it took. This has several consequences, the most fun being that words had flexibility on the page and often the relations between words had to be thought out more carefully (as any student asked to parse a sentence in front of the group can attest). These are endlessly fun features for the contemporary poet!

It’s fascinating to see how Maguire’s particular research has spawned such an expansive poetic project, specifically one that explores how languages such as Latin and Medieval English have impacted the ways in which those living in contemporary Western culture exist, interact and interrelate. Much like poets Erín Moure, Lisa Robertson and Margaret Christakos (and numerous others), hers is a poetry constructed as a field of research, and one that could easily fit into far more than a trilogy of books. 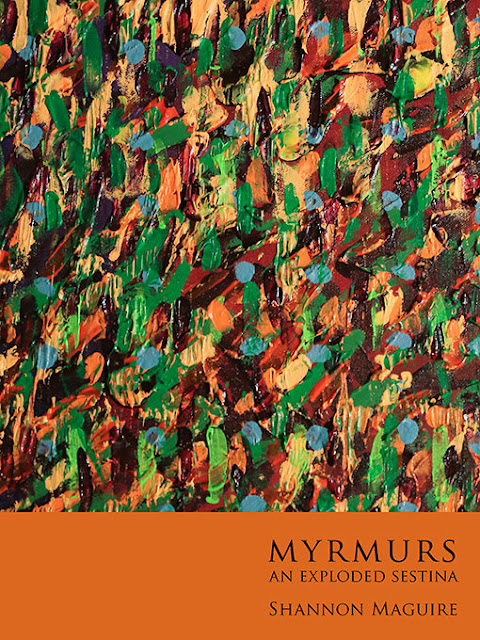 Myrmurs: An Exploded Sestina is constructed in seven sections, the first six of which—“NOISE,” “LETTERS,” “PLEASURE,”CROWD,” “VOLUME” and “INCORRIGIBLE”—spool and spiral throughout the length and breadth of the book, akin to strands of DNA, leaving the final section, “TORNADA,” as a kind of coda. While the book might, at first, appear to be structured as a tapestry as opposed to any linear expression of narrative, each section opens, spreads apart and each progress toward an accumulation that leads to, if not a conclusion, but a logical place at which to close. There is something lovely about the way her poems is scattered with writing on ants that end up taking over her entire narrative. Is this, in the end, simply a poetry collection on ants? Hers is a machine in which every piece is concurrently moving, much like the ants, as, towards the end of the collection, she writes:

It is also curious to note another title of language/form poetry writing around research on ants, from Maguire’s “exploded sestina” to the prose poems that make up American poet Sawako Nakayasu’s remarkable The Ants (Los Angeles CA: Les Figues Press, 2014) [see my review of such here]. Either way, I’m impressed at the ambition Maguire has for her writing so early, given that her first two trade poetry books are part of such an expansive project; even Robert Kroetsch was a few poetry books in before he understood “Field Notes” as a life-long poem, most of which (but for some earlier works, and a few produced at the end that hadn’t yet been included) were reprinted in his Completed Field Notes: The Long Poems of Robert Kroetsch (University of Alberta Press, 2000). What might this mean, as well, for what might follow, once her trilogy is finally complete? In Myrmurs, Maguire’s is a language poetry composed with a lyric lilt and tone, one constructed with precise measure and a musical ear.

Forms a stain in the wound
grasses swung back, attaching to covers

As well, Maguire isn’t the only contemporary poet utilizing medieval research for the sake of book-length poetry projects—Philadelphia poet Pattie McCarthy, for example, has long been working with and around medieval research—but Maguire’s research goes deeper than playing with historical information and the structures of medieval culture, pushing down into the bare bones of the language itself.

Epiphyte. Because she cannot, carry across

Shikimic & cinnamate. Hawk-moth unimpaired by warmer upper
layers is this red flapping of sound. Wetlands in first & third
courts of the moon

Krill & boundaries of mouths. Most dry ripple. More arid
sentiments. She laid down by. Its own food this method produces
Tongue that exceeds. A word or certain land

Abiota, your new endearment. By which you are present in this
absolute humidity. When they brutalized, they translated. Me into
her hands. I rainband there