O, give us this day our daily dearth:
My Friend, My Darling of Catastrophe
Enticing the moon, efficiently learning,
Slowly turning away from the gruesome
Spectacle, slyly fading, failing sightline,
Exiting through common-ground down;
But, should you reconsider, unsunder
Every lie-for-lie truth sadly laid bare
On those ivory keys: Play “Goodbye”;
Discover how long you long for the past.

Canadian poet and critic Judith Fitzgerald’s latest poetry title is Impeccable Regret (Vancouver BC: Talonbooks, 2015). The author of some two dozen poetry titles going back more than forty years, from Octave (1970) to the most recent “Adagios Quartet” – published through Oberon Press as Iphigenia’s Song, vol. 1 (2003), Orestes’ Lament, vol. 2 (2004), Electra’s Benison, vol. 3 (2006) and O, Clytaemnestra!, vol. 4 (2007) – Fitzgerald, through multiple award nominations and her ongoing critical work, has been a consistent force in Canadian writing for decades. She has also produced some of my favourite poetry overall; her Lacerating Heartwood (Toronto ON: Coach House Books, 1977) remains one of my most reread poetry collections. Her newest collection, Impeccable Regret, is a book of passionate grief, exploring loss at its most heartfelt through a series of short lyric riffs, many of which are composed for friends and loved ones, too many of whom have passed. Her poems move from incantation to sing-song rhyme and chant to ode, as she writes in the opening poem, “Dear Reader”:

As the back cover tells us: “In the words of Arthur Miller, ‘All one can do is hope to end up with the right regrets.’” The book opens with an introduction by Thomas Dilworth, “a University of Windsor Killam Fellow and a Fellow of the Royal Society of Canada who specializes in Modernist Literature and Romantic Poetry.” While elements of the introduction are interesting, I feel it might have been more appropriate to end, and not open, the collection, and allow the work to first speak for itself. As Dilworth writes:

The beauty of this poetry is, in turns and in combinations, delicately exquisite, clunky, multivalent, polyphonic, portmanteau, kenning, punning, colloquial, arcane, gently lyrical, neologistic, allusive, and (pervasively) playful. Her puns and neologisms are themselves mini poems: from one poem, “caligulations,” “regretitude,” “neocoinjoinings” (the latter, alliances of neocons devoted to money). This poetry extends the tradition of rich poetic language flowering in Gerard Manley Hopkins and Joyce in Finnegans Wake, rooted in Keats and Shakespeare. Like Joyce, Fitzgerald sometimes sounds like Hopkins. “Whatsun, donesun … Smokebrick, … scumblight, / Stunsunk, stardark” – words from “Céilidh,” a treasure of lovely, enlivening sound and varying-lovely rhythms, which evokes Hopkins because he was the first ecological poet and this poem concerns the eclipse of nature as “Forest fires smoke city air” in a “human blaze” that is global warming and more.
So these poems are modernist in immediate intrinsic form as well as message (cultural loss), through their intrinsic forms (lyric length, verse-lines, stanzas) are largely conventionally pre-modernist. Many of these poems retain for me unsolved mysteries, an aspect of their vitality, but rereading expands and deepens understanding. To comprehend most of them (you will, if you like me, need to) read each one three times before moving on to the next – so that you can say with her, “we/did time/between/the lines.” Why bother? Because so many of these poems are major. 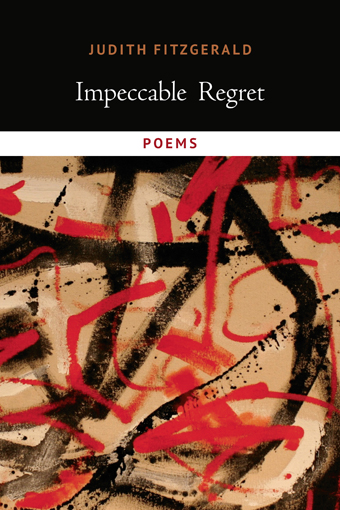 Perhaps one of the only poetry collections to exist that includes a poem collaboration with Leonard Cohen (the poem “Blood Culture,” composed for the late Robert Kroetsch), as well as another with Ottawa poet Susan McMaster, Fitzgerald’s poetry has long dealth with grief, longing, loss and affairs of the heart, wrapped up in a language and sound gymnastics reminiscent of younger writers such as New York poet (and Canadian expat) Adeena Karasick. Simply to go through the titles of her two dozen poetry collections is to be aware of the binary of her work: “desire,” “rapturous,” “heart,” “wounded” and “paradise.” Fitzgerald’s poems in this new collection are composed as exclamations, proclaiming and exploring grief and love, loss and regret, the most lively of which exist in that space where her language refuses the straight and simple line. Her strength comes from the gymnastic twist, and anything less doesn’t retain the same kind of passion or sharpness. Listen as she opens the poem “REVELATORY IRRUPTIONS / DANS L’ESPIRIT DU TERRORISME”: “Peeling veil, mask, persona, personalization, personification, / dazzling brightness, and necrotic abyss; sky rolled up, a scroll / drawn back, a curtain; there’s a joke, clown, whited polyandrium, / dollop of quicksilver, scudded rubescent and violet clouds falling / from hysterical sky [.]”

Dear rob: Thank you beyond mere words for creating this lovely page. Your generosity slays me; and, for that reason alone, I wish you all the best and always shall. Salut, Dear Pal! (O, belated congrats on your union; looks lovely on both of you; happy you've found the woman who found you.)