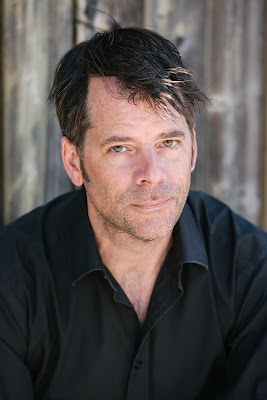 Matt Cahill is a Toronto writer and psychotherapist. His debut novel, The Society of Experience, was released in October 2015 with Buckrider Books, an imprint of Wolsak & Wynn, and was listed on the Harper’s Bazaar Top 15 Must-Read Books fall list. His short story, Snowshoe, was published in 2014 with Found Press. He previously worked for 20 years behind the scenes of the Canadian film/TV industry.

1 - How did your first book change your life? How does your most recent work compare to your previous? How does it feel different?
Well, technically this is my first published novel, but my second book; my previous book was thrown into a virtual fireplace otherwise it would have taken up too many fruitless years. That said, writing the first book was proof that I could write a book, and thus dispense with the annoying adage “anyone has one book in them.” I have two! The book that’s out now (Oct 1) is more mature, but also more complex. Your first book tends to have A LOT OF EMOTION IN IT, DAMMIT. In this book I learned how you can convey the same thing but without excessive sturm und drang.

2 - How did you come to fiction first, as opposed to, say, poetry or non-fiction?
By imitation. My brother wrote a double-sided one page short story when I was around 11. I couldn’t believe someone could just create a whole universe like that. I was hooked. That said, I occasionally write poetry.

3 - How long does it take to start any particular writing project? Does your writing initially come quickly, or is it a slow process? Do first drafts appear looking close to their final shape, or does your work come out of copious notes?
There’s usually a main path that comes out without too much difficulty, however the story which ultimately supports that path tends to come with patience and development, and sometimes accident. Sometimes a piece of narrative rebar from an abandoned short story becomes a central turning point for a novel. I don’t like to leave good ideas laying around unused.

4 - Where does a work of fiction usually begin for you? Are you an author of short pieces that end up combining into a larger project, or are you working on a "book" from the very beginning?
I usually know early on if what I’m doing is novel-worthy. You don’t want to stare down five years with something that doesn’t have the sea legs for that kind of adventure.

5 - Are public readings part of or counter to your creative process? Are you the sort of writer who enjoys doing readings?
I kind of like doing readings, and I’m pretty good at bringing life to the words in front of a microphone. That said, public readings take me away from writing more than anything else. They are necessary for promotion - particularly allowing people ready access to the work without them first purchasing it - but readings have nothing to do with writing.

6 - Do you have any theoretical concerns behind your writing? What kinds of questions are you trying to answer with your work? What do you even think the current questions are?
Nope. I mean, I probably do on a less-than-conscious level, but I don’t think I would want to write from a self-directed agenda. In general, I like to poke at the complexity of life and the ways that we end up becoming more accurate reflections of ourselves - for better or worse.

7 – What do you see the current role of the writer being in larger culture? Does s/he even have one? What do you think the role of the writer should be?
I think one important part we play is to allow anyone in the world to know that they are not alone. We write to share. There are many roles that writers can play. I’m equally happy to entertain, or inform, or challenge.

8 - Do you find the process of working with an outside editor difficult or essential (or both)?
In general, an editor is essential because you’re not going to catch everything, especially in a novel where there is more continuity to oversee. A good editor wants what you’ve written to be the best that it can be, knowing that it needs to reflect the strengths and promise of your intent. A bad editor is going to take your pen and go “You should do this [insert something writer wouldn’t write] because I think it works better,” without the opportunity for dialogue.

9 - What is the best piece of advice you've heard (not necessarily given to you directly)?
Paul Vermeersch said to me "Something has to happen in a scene,” which he heard earlier from someone else. It’s easy to write scenes where two people are earnestly talking, but if it’s just dialogue then it just doesn’t read off the page very well - it seems incomplete. It’s easy to forget setting, mood, and story when you’re hyper focused on a shiny bit of character-revealing dialogue. Have someone fixing a clock, or brushing something out of their hair, or thinking about picking up groceries. Something has to happen in a scene.

10 - How easy has it been for you to move between genres (short stories to the novel to essays)? What do you see as the appeal?
Each serve their purpose. Short stories are a stomping ground of experimentation - I get to play with voice and perspective, sometimes subject matter. Essays allow me to speak personally about something, and back that up with research and reason. Novels are marathons of imagination which require stamina and self-reflection. Writing in these different formats doesn’t automagically make you a “good writer,” but I’ll admit that it certainly contributes to an overall flexibility that I wouldn’t necessarily have if, say, I only wrote novels.

11 - What kind of writing routine do you tend to keep, or do you even have one? How does a typical day (for you) begin?
By any means possible. Typically weekends, but sometimes I just grab my notebook or my laptop and leave without care for day or time. You have to carve out the space because no one is going to hand that to you. You have to claim it as yours and fight for it.

12 - When your writing gets stalled, where do you turn or return for (for lack of a better word) inspiration?
In no particular order: music, film, dance, visual art, newspapers, doing the dishes, long walks.

13 - What fragrance reminds you of home?
I moved a lot when I was a kid, so I don’t really have that. Fragrance is extremely evocative. The other day while I was on a morning run, the doors to a local public school were open while people were loading in equipment, and I immediately picked up smells that I haven’t come across in decades: glue, ink, craft paper, cleaning products, arts supplies. A part of me stayed behind and sat on the floor of that school hallway and didn’t want to leave.

14 - David W. McFadden once said that books come from books, but are there any other forms that influence your work, whether nature, music, science or visual art?
Everything. It sounds trite, but life is my notebook. I’m a tourist/alien. I take interest in everything around me. Why wouldn’t you?

15 - What other writers or writings are important for your work, or simply your life outside of your work?
My philosophy is “read widely” as opposed to being “well-read”. If all we do is read The Classics - when we don’t really play a part in how that mantle is bestowed - then that brings us closer to monoculture, which is terrible. I read what interests me, even if it’s flawed. Also, more and more I ask myself where my blindspots are. For example, am I reading too many books by white men? Am I only getting North American perspectives?

16 - What would you like to do that you haven't yet done?
I’d like to write about the film/TV industry in a way that is both honest and compassionate. Too often it’s Day Of The Locust and Swimming With Sharks, or The Player. Yes, there is bone-headed self-destructive bullshit in that industry…but that doesn’t make it unique. There is depth, too.

17 - If you could pick any other occupation to attempt, what would it be? Or, alternately, what do you think you would have ended up doing had you not been a writer?
Assuming this isn’t my only book or accomplishment as a writer, it will be my third career. I’m perfectly happy with where I am in my life, work wise. My psychotherapy practice offers relief from the very internal, anti-social nature of writing.

18 - What made you write, as opposed to doing something else?
A clinical supervisor cautioned me early in my psychotherapy practice about over-pathologizing why people chose the vocations they had. “After all,” she said, “we sit and talk to people for a living - what’s with that?"

19 - What was the last great book you read? What was the last great film?
Thomas King’s The Inconvenient Indian: A Curious Account of Native People in North America. I’ve seen so many middling films recently, but Force Majeure was very interesting. It’s the sort of movie where you want to have a discussion with whoever is sitting next to you immediately after you see it.

20 - What are you currently working on?
A sequel to The Society of Experience. Also, a novel about someone cursed with magic. I’m not sure which child will get fed first, but there are worse problems to have.