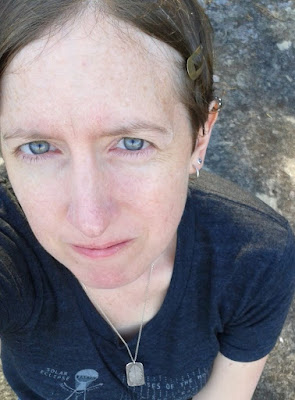 Over the years Kim Trainor has worked at a campus radio station, the Department of Fisheries and Oceans, a biomedical library, and is currently a sessional lecturer at UBC. Her poetry has won the Gustafson Prize and the Malahat Review Long Poem Prize, and has appeared in the 2013 Global Poetry Anthology and The Best Canadian Poetry in English 2014. Her first collection, Karyotype, has just appeared with Brick Books (October 2015).

1 - How did your first book or chapbook change your life? How does your most recent work compare to your previous? How does it feel different?
Karyotype is my first book, and it's been in print about 2 weeks now, so.....it was very strange when I happened to wander into Pulp Fiction Books on Main street in Vancouver last week and saw copies of it on the shelf. It felt surreal. Chris Brayshaw, the owner, and an old friend from my radio days, asked me to sign them, and honestly it felt like I was defacing a stranger's book. Graffiti on the title page.

2 - How did you come to poetry first, as opposed to, say, fiction or non-fiction?
I actually came to poetry last. It never occurred to me I could write poetry so I began with short fiction, which I'm terrible at. I was very bored writing fiction. I had a nuit blanche, about six years ago, and when I got up the next morning I began to write a poem. It was like falling in love.

3 - How long does it take to start any particular writing project? Does your writing initially come quickly, or is it a slow process? Do first drafts appear looking close to their final shape, or does your work come out of copious notes?
When an idea for a poem comes to me, I usually write it fairly quickly, and I don't much revise. Minor revisions, I guess, a word, a phrase, but the overall shape of the poem stays the same.

4 - Where does a poem usually begin for you? Are you an author of short pieces that end up combining into a larger project, or are you working on a "book" from the very beginning?
A poem for me often begins with a title. "On the ordering of chaotic bodies of poetry," for example. I came across this phrase in a book on the roots of lyric and had no idea what I'd do with it. Months later it came to me in a flash. I made a few notes, a sort of blueprint, and wrote straight through. Karyotype, except for the title sequence of 23 lyrics, simply began as individual poems that in fact turned out to have many interwoven threads. But just now I'm working on a collection of poems that are related to the Atacama desert, where I travelled this past summer -- so there's more of a clear idea of a book from the start.

5 - Are public readings part of or counter to your creative process? Are you the sort of writer who enjoys doing readings?
I've just begun doing poetry readings. I read on the Poetry Bus at Word Vancouver -- it's an actual Translink bus, a B-line. As I began to read, a tourist wandered through the front door of the bus and asked the host, Kevin Williams of Talonbooks, who was sitting I think in the driver's seat, for directions. That was fun. And I'm just back from a reading tour in northern BC with Jane Munro, who was brilliant to tour with. In Fort St John I met a unicyclist who told me about the northern lights and gave me directions to the hiking trails at the edge of town. That day, Jane and I were hosted by the poets Greg Lainsbury and Kara MacDonald, who shared with us their poetry and their experience of living in the Peace, in oil and gas country. I read Greg's Versions of North on the Greyhound from Dawson Creek to Prince George -- really enjoyed it. In the library workshop in Fort St. John one of the participants -- still in high school I think (shoot, I forget her name, but it began with a "K", maybe Katelyn?) -- seemed to be inspired to try writing some poetry in form, and with constraints, after our discussion of my alphabet poem. In Dawson Creek, the poet Donna Kane was so welcoming, and we read at a songwriters' communal dinner (biscuits and meatball soup in a crock). Early the next morning, walking along the Alaskan highway into town, I happened across a road crew putting up new banners on the lampposts. One of the workers, all bundled up in layers against the cold, said to me, "so are you here to read another poem?" It was Bea, a woman I'd sat next to at the dinner. In the Cafe Voltaire in Prince George we met the poet Al Rempel, who was lovely, and had come straight from a staff meeting at the school where he teaches. And the creative writing students at UNBC asked us some great questions about our work. Poetry seems a fairly lonesome activity at times. Readings draw you back into the world, and you make some cool connections. I think readings also make you think more about the music in your poems, as they are often so bound to the page.

6 - Do you have any theoretical concerns behind your writing? What kinds of questions are you trying to answer with your work? What do you even think the current questions are?
I have certain preoccupations, I guess. I'm interested in archaeogenetics; the metaphors we use to describe the human genome (as a text we can copy, edit, rewrite); radio and radio astronomy; the fragility and endurance of human texts -- biological and cultural; our lived experiences as bodies and the material conditions that mediate our access to language and other resources. I guess these come through some of the poems I write. But it's not strictly conscious or programmatic. It's just what happens.

7 – What do you see the current role of the writer being in larger culture? Does s/he even have one? What do you think the role of the writer should be?
I'm sure there are many roles. For myself, I lean towards the ethical potential of poetry -- that it can help us to pay attention to the world, and even at times that it can have a transformative effect. That's my snapshot answer, because the long one would be pages and pages long. Some of these ideas I had a chance to explore when Anita Lahey kindly invited me to be on a panel discussion called "The Investigative Poet" with Rob Winger, this past spring.

8 - Do you find the process of working with an outside editor difficult or essential (or both)?
I was very lucky to have Don McKay as my editor for Karyotype. We corresponded by regular post, handwritten letters over several months. It was a brilliant experience. Don made a few really crucial suggestions for the ordering of the MS, along with many other suggestions and queries regarding alternative phrasings and punctuation. He did also correct me on the fossil record in one instance! Alayna Munce copyedited the book (but really so much more than that), and she also did a lot of fact checking, as I make use of many allusions and quotations, and she was so great. They saw things I had overlooked, or couldn't see (or hear), and made Karyotype a stronger book for sure.

9 - What is the best piece of advice you've heard (not necessarily given to you directly)?
Never plant anything before the Victoria Day long weekend. That's my grandma, quoting her father. Not sure if he was talking about the prairies or the west coast, as he farmed in both places.

10 - How easy has it been for you to move between genres (poetry to critical prose)? What do you see as the appeal?
Now and then I'll write something a little theoretical-creative for my blog, or recently a "How Poems Work" for Arc (on Pat Lowther's "Hotline to the Gulf"). I tend to write these much as I write a poem -- fragmented, like a collage, drawing out connections by selection and juxtaposition. So I guess it feels like a continuum.

11 - What kind of writing routine do you tend to keep, or do you even have one? How does a typical day (for you) begin?
Lately I write poetry very infrequently. Only when I suddenly realize I have an idea. I haven't written a poem I really liked for about 9 months now. It comes and goes in waves. A typical day consists of riding my bike out to UBC and teaching.

12 - When your writing gets stalled, where do you turn or return for (for lack of a better word) inspiration?
I wouldn't say my writing is ever stalled. But sometimes poetry seems very far away. If I feel I miss writing, I might look over titles or ideas I've jotted down in my notebook.

13 - What fragrance reminds you of home?
Toasted wheat germ, which sounds weird, but my mom used to put it in banana bread. That and a pot of tea brewing on a summer night.

14 - David W. McFadden once said that books come from books, but are there any other forms that influence your work, whether nature, music, science or visual art?
Often the starting point for a poem will be a lived moment and wanting to remember it. Sometimes it's a news item -- a report on the ICRC's Books of Belongings, which document belongings of the victims of the Srebrenica massacres; a report on Google Glass using the human skull to transmit sound. Or in the case of Karyotype, it was a documentary on the Taklamakan desert. I guess archaeogenetics as a subject has really drawn me to write.

15 - What other writers or writings are important for your work, or simply your life outside of your work?
Amongst the poets: Walt Whitman is always with me -- a battered green cloth-covered Everyman's edition (in fact I also have a Walt Whitman t-shirt); Edward Thomas; John Thompson; Seamus Heaney; Adrienne Rich; Carolyn Forché; Miklos Radnoti. Elaine Scarry's The Body in Pain. Dr. Zhivago, in the older translation by Max Hayward and Manya Harari.

16 - What would you like to do that you haven't yet done?
I'd like to learn to ride my bike with no hands.

17 - If you could pick any other occupation to attempt, what would it be? Or, alternately, what do you think you would have ended up doing had you not been a writer?
I'd be Townes van Zandt. "I covered my lovers with flowers and wounds" --  I'd sing at the Old Quarter.

18 - What made you write, as opposed to doing something else?
No idea. It's a weird compulsion.

19 - What was the last great book you read? What was the last great film?
I happened to borrow an Israeli film from the Vancouver Public Library called Seven Minutes in Heaven. It was haunting, a ghostly love story, set within the violence of the occupation. Another one -- also found in the VPL -- is River, directed by Mark Wihak and set in Regina. It's one of the most beautifully realistic films I've ever seen about creative life and friendship. And it has a great soundtrack by Michelle McAdorey and Eric Chenaux. The Half Lives of Pat Lowther by Christine Wiesenthal is a magnificent book. And I've been enjoying David S. Reynold's Walt Whitman's America. For example, you learn there was a 19th century brand of cigar that used Whitman's image. I'm sure I read that it was called "Spears o'grass," although I can't find the reference now, so maybe I made it up -- but I'd smoke that.

20 - What are you currently working on?
Well, besides scratching away a little at these Atacama poems (it's the middle of term so I'm deluged with marking, and not much poetry gets written), I'm learning to play "Pancho and Lefty."