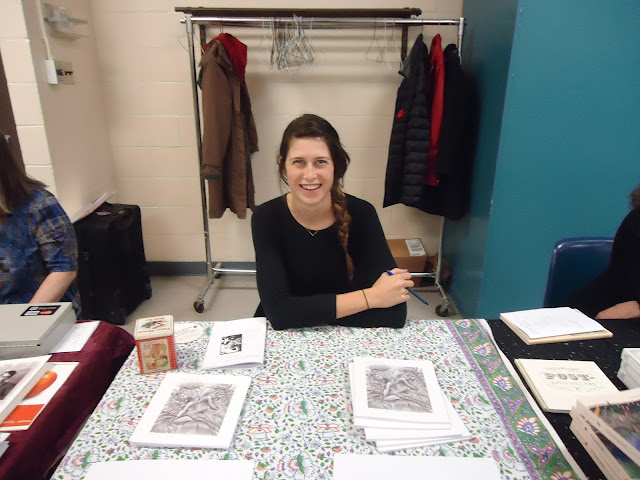 [Claire Farley of Canthius Literary Journal] Can you believe our semi-annual fair is now twenty-one years old? Old enough to be tried as an adult; old enough to know better.

See my reports on the spring fair here.

Here are some items I gathered as part of the two-day event this time ‘round:

Ottawa ON: Cameron Anstee’s Apt. 9 Press continues to produce stunning limited-edition chapbooks, and this season, his two titles include Kingston poet and Puddles of Sky Press publisher Michael e. Casteels’ solar-powered light bulb and the lake’s achy tooth and Paris, Ontario poet Nelson Ball’s Small Waterways. Casteels, who has a first trade collection out next year with Invisible Publishing, has long been known for his visual and concrete poems, as well as his incredibly short prose poems. This new chapbook is produced as a series of single pages set into an envelope, highlighting the condensed, stand-alone quality of his tiny poems. There is such a quality of meditative calm in Casteels’ poems, set down with incredible density, but a remarkable amount of silence and breath, even as he writes the evocative “(a)lo(o)n(e)”

Nelson Ball has long been considered the master of the short lyric (influencing numerous poets since, including jwcurry, Stuart Ross, Mark Truscott, Cameron Anstee, Michael e. Casteels and dozens of others), composing complex poems out of the fewest words possible, something he has been doing now for some five decades or more. And at thirty pages, Small Waterways reads as a substantial collection (in chapbook terms, at least) of powerful poems, some of which read like sketched out notes, some as deep meditations and others as small thoughts stretched to beyond their outer limits. 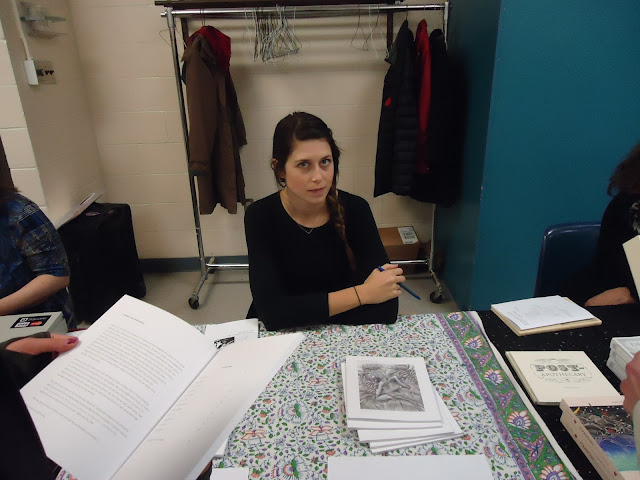 Ottawa ON: Ottawa poet Marilyn Irwin’s shrieking violet has moved into producing chapbooks, and the results are quite remarkable, introducing two exquisite-looking hand-sewn items by well-known Ottawa poets, each title produced in runs of fifty copies: Pearl Pirie’s Reviews of Non-existent Titles and David Currie’s Poems for the Mishka. Pirie’s chapbook consists of twelve prose-poems composed exactly as the title suggests, as short reviews of titles that don’t actually exist. The idea is a curious one, and one might suspect that the things she edits out of saying, possibly, in her own reviews might have snuck into some of these poems, whether consciously or unconsciously. As she asks, rhetorically, in her review of “ö / by Chana Caron (epipin print, 2014)”: “Is it bad, or is a book a neutral form now, and perfect binding is the new open mic?”

A raw and cooked mixture of flash fiction, fictional letters and form poetry, circling around why the ex (or construct of witness to a fictionalized ex who resembles a fellow writer known to be once in association with the author) is morally bankrupt and the narrator, by implication, is a wholesome and impotent victim of the systems. An ekphrastic series on Spike Jones cites time points (such as 0:42:17-32) with no extension beyond relating details and upshots of scenes. No transparency had you not seen the movie, but since poem titles are the movie titles, IMDB is your friend.

In a nod to Bunting, “Reflux of what can’t be mended, / a Peptobismol for easy griefs”. Generally skilled use of rhythm and metaphor to express bitterness at book length. There may be profanity, but there is no punctuation. Prevalent pronoun (rare): It. Written by the winner of several important awards.

In/Words [see my Open Book: Ontario profile on In/Words here] alumni David Currie’s latest chapbook, Poems for the Mishka (“mishka” is Russian for “bear cub”), is a collection of seven short poems composed, it suggests, for a dog (whether his dog or someone else’s is not clear). Through a small handful of previous chapbooks, including one with Anstee’s Apt. 9 Press, Currie’s prior work has explored humour, narrative and the absurd, as well as a striking stage presence/performer, but these poems seem far more understated, and subtle. They might be exactly what they appear to be, at first; but then again, they might not.

I stubbed my toe and blamed the dog,
the dog walked into a sandwich board
and looked at me to make it better.
We are just different people, I guess.