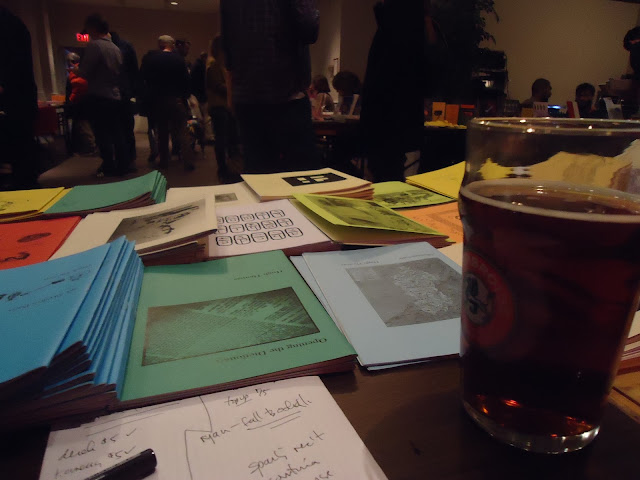 Christine and I were in Toronto recently, for the sake of the annual Meet the Presses event on November 14th, tabling with a mound of above/ground press items, and our three new fall poetry titles through Chaudiere Books (which launch in Toronto on December 2; and you remember our Ottawa launch next Saturday, right?). Here’s some of what I managed to pick up while there:

London ON: It’s lovely to see a new chapbook by Ottawa’s Cameron Anstee, produced by Karen Schindler’s Baseline Press: his Consider Each Possibility. Very much influenced by poets such as Nelson Ball, it is lovely, too, to see an item with an opening quote by Nelson’s late partner, the artist Barbara Caruso, that reads:

Even when I made no attempt to create darker or lighter lines, in fact attempted to maintain a sameness of pressure, variations occurred. The body tires, the hand tires, the mind tires and the line will tell of this.

As much as his poems have been increasing in density over the past few years, there is also an increased lightness within Anstee’s lines, one that allows for the possibility of a line that can achieve both as a forceful, pointed strike and as a gentle exhalation.

I forget my age on occasion

the days matter
or they don’t

between possibilities
we install, expand

it appears abrupt
but is not

Toronto ON: From one of the COUGH regulars [see my review of one of their issues here], Oliver La Caverna Cusimano, comes the chapbook Strands (shuffaloff / Eternal Network, 2015). As his slightly-meandering introduction to the collection reads:

The poems in this chapbook were made between the fall of 2013 and the winter of 2014/15. It has since occurred to me that the work of making them was driven by a poetic question, a question asked in language to language, whose response comes as language to language. It is, What becomes of words when at least one letter of each is displaced, up or down, such that these, read top to bottom, left to right, spell an intersecting text? A third text is involved in every poem, supplying it its fund of vocabulary. The words in poems of the initial section, doughnuts and coffee, for example, except words in parenthesis, are drawn from Jack Spicer’s book, Language. The three other parts are: alcohol poems drawn from Robert Creeley’s Words; sugar poems drawn from Part One of Avital Ronell’s Crack Wars: Literature Addiction Mania; and marijuana poems from Book 1 of John Clarke’s In the Analogy.

As I conceive it, a poetic question sends its questioner in quest of its origin. The question of the question’s origin is thus the real question, the question to the real, since there is no, as far as I know, cause for its origination. The quest, therefore, consists in questioning the non-causal origin that originates the question. Insofar as the quest makes requests of its origin, its results are original. That is, not indicative of my – the questioner’s – secrecy, but abandoned to the quest’s requirements: by the time a result appears, the questioner is already further in quest, disappeared. The chapbook, then, collected abandoned results, is the infamous record of an in-fancy. Reading it would, I imagine, consist in requesting more of the quest’s non-causal origin, which is nowhere in the poems, or, the real of each. The poems, abandoned resilient results of non-causal origination, do not belong to an experiment, though are marked as in search of experience. A remark on one is registered in the resiling unremarkably of further experience.

What immediately strikes in these lively poems is the ways in which Cusimano manages to breathe new life into both language and the page. I wonder how such might be read aloud, being how discordant and visual the pieces are. There is a rough quality to the pieces that feel entirely appropriate, and even deliberate, as he pulls individual letters out of lifted lines to form new threads, excising a form of erasure without actually erasing anything: as a kind of excision. 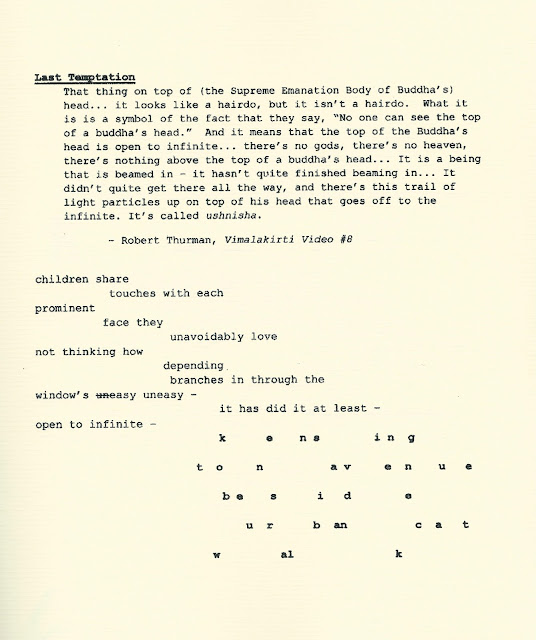