Michael Blouin, I Don’t Know How To Behave: A Fiction


We are floating up a steep scrubby slope towards what appears to be a huge cement ramp leading nowhere. The camera moves haphazardly as if being carried by someone who has forgotten that it is there. We hear a voice gently singing “Tumbling Tumbleweeds” from a cheap distant speaker, a car radio, and a distinctive, affable, male voice – Bruce McDonald’s, perhaps:

VOICE-OVER: This is it see? Right there. Not all of it. See? The car was meant to come right up here, take off the hell up that ramp, there was more of it then. Take off like a rocket.

We top the ramp and the vastness of the St. Lawrence River stretches out before us. Sun glints off the water and the camera turns back to the speaker’s face.

The camera pans back over the water and down river to the town of Morrisburg. (zoom, blur focus)

BRUCE: This is it, see? Right there. Not small-town Ontario like it looks. City of Dreams.

It is lake, the room is dark save for the light from the television. We are tracking looking down over the bed where lie a fortyish man in boxer shorts and a young Asian woman in T-shirt and panties. They are asleep.

This overview will begin to acquaint you with the screenplay format writing rules and screenwriting etiquette you’ll need to know about. 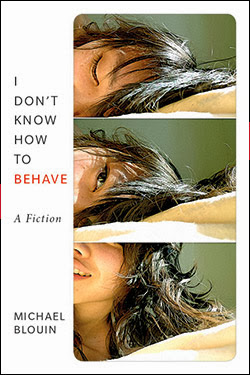 Kemptville, Ontario author Michael Blouin’s fourth trade book and second novel is I Don’t Know How To Behave: A Fiction (Toronto ON: BookThug, 2013), a book centred in Morrisburg, Ontario, through alternating points of time. The first of these two alternating narratives is “Mid-Night All Night,” which writes the fictional story of the real-life “World’s Greatest Daredevil,” Ken Carter from the mid to late 1970s, with the second, “He Grabbed Her Suddenly, Held Her To Himself And Kissed Her Hard Like In A Hollywood Movie,” which fictionalizes “Renowned Canadian Film Director” Bruce McDonald and “Poet” Gillian Sze (why doesn’t Sze get her own prefatory complimentary description? her fictional depiction here seems, admittedly, thin) in 1999. As a thread also running underneath the main body of the text, italicized, is an essay-thread on the history of film, specifically Canadian film, and screenplays, and the book itself can be seen as far closer to a film-script than a traditional novel, with a structure heavily influenced, one might presume, from Vancouver writer Michael Turner, specifically his Hard Core Logo (Vancouver BC: Arsenal Pulp Press, 1993) or American Whiskey Bar (Vancouver BC: Arsenal Pulp Press, 2004). The linkages become that much more obvious when one considers that it was Bruce McDonald himself who turned Turner’s poetry collection into a feature film back in 1996. Moving from his award-winning first novel, Chase and Haven (Toronto ON: Coach House Books, 2008) to this current work, it is as though Blouin took the lessons learned through composing that book, and combined it with lessons learned composing his poetry titles and playwriting, and the result is an incredibly smooth work that plays off all three without sacrificing any coherence as a novel.

I Don’t Know How To Behave: A Fiction is an accumulation of short bursts and scenes that evolve into a series of narratives that increasingly wrap around each other, and Blouin is best at being able to quickly establish a tone. Through his accumulation of short sections, he composes a pretty wide canvas, and one can’t necessarily see or even speculate the entire portrait even by the mid-way point. Where is he going with this? Through his books so far, Blouin seems to favour a kind of rural lyric, writing conversational novels about those on the outside attempting to look in, and writing out what really happens, how it might be seen, how it is depicted, and who might be in control of the differences.

this was always going to have a cost

rain in the air my

grave will be unmarked.

The ramp and its runway were located in a field just west of Hanes Road, south of County Road 2 in Morrisburg, Ontario, Canada. The ramp has since been demolished, but the concrete runway still exists though it is overgrown.

You will not find it unless you know it’s there.

Given that his previous book, the poetry collection Wore Down Trust (Toronto ON: Pedlar Press, 2011) [see my review of such here], writes alternating scenes of Johnny Cash and the late Canadian poet Alden Nowlan, centred around the two meeting backstage at a Cash concert in Fredericton, New Brunswick, one can see Blouin’s interest in fictionalizing the lives of artists (including Canadian poets). Blouin seems to enjoy playing off a particular expectation of character, and making characters who we think we’re familiar with do both expected and unexpected things. Both books, too, swirl a fiction around one central point: where Wore Down Trust wrote around the central point of a meeting between the two central characters, I Don’t Know How To Behave: A Fiction begins with Morrisburg, Ontario as its central point, but as the novel makes clear, it is Ken Carter’s infamous attempt to jump the river in 1979 that he is really writing around, working the fictional Carter up to the attempt, and the fictional McDonald and Sze arriving to contemplate an attempt at a feature-length film depicting the event. Further in the novel, Blouin writes out a fictional interview with McDonald in the Morrisburg Leader, “Toronto film director Bruce McDonald is visiting Morrisburg and scouting locations for a film he says he intends to produce about the ill-fated 1979 ‘Super Jump’ attempted over the St. Lawrence River just west of Morrisburg by daredevil Ken Carter.” Through this interview, is this the fictional McDonald or the writer Blouin speaking?

ML: This is a little different than the films you’ve done to date?
BM: Yeah. Well, I don’t know. I like characters who pursue dreams which may not be what most people would choose – outsiders and outlaws. And people who aren’t afraid to kind of go to a couple of dark places. So I think it was that kind of feeling that drew me to this story. I like the idea of working with history – manipulating it as a material.

I Don’t Know How To Behave: A Fiction is a playful work exploring character and expectation, filmmaking and risk, and characters who become trapped in the histories of their failures. And yet, through their failures, Blouin’s characters remain optimistic, or at least moving forward, until they disappear entirely, immune to the reasons why, without even knowing the difference.