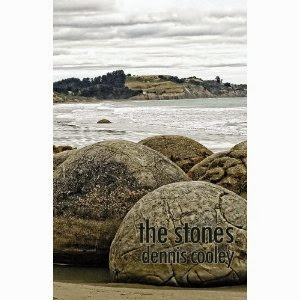 In the stones (Winnipeg MB: Turnstone Press, 2013), Winnipeg poet, editor and critic Dennis Cooley’s fifteenth book of poems, Cooley appears to have composed an extension of the structures and themes of his previous poetry collection, correction line (Saskatoon SK: Thistledown, 2008): a series of lyric fragments that write out geographic tracings, highlighting hearth and home. Throughout his published work, Cooley has work through prairie histories, prairie geographies and family, all the way back to his first collection, Leaving (Turnstone Press, 1980), and expanding to his many other collections: Bloody Jack (Turnstone Press, 1984; Edmonton AB: University of Alberta Press, 2002), Soul Searching (Red Deer AB: Red Deer College Press, 1987), Dedications (Saskatoon SK: Thistledown Press, 1988), This Only Home (Turnstone, 1992), Irene (Turnstone Press, 2000) and the recent critical selected, By Word of Mouth: The Poetry of Dennis Cooley (ed. Nicole Markotić; Waterloo ON: Wilfrid Laurier University Press, 2007). The poems in the stones begin in Scotland, and open up through a play on the word, the image and the idea of the stone, writing “the rocks scraped by wind and snow / and by later arrivals / rivals for space,” composing a space entirely constructed out of the semi-permanence of stone. Through referencing the late prairie poet Robert Kroetsch in one of the four epigraphs that open the collection, seemingly lifted from one of Cooley’s own journal entries, Cooley links the stones to Kroetsch’s own stone hammer from The Stone Hammer Poems (Nanaimo BC: Oolichan Books, 1975), composing the tool of the stone as a central point, as well as a building block of civilization itself.

through Saarland my
grandmother’s family home

Bill Wood, likely
protestant, good
as his word
did it for his pals
he did
& they died
& some were damned
& all of them drowned
where the South Saskatchewan Regiment waded ashore
wadded with mud & blood

Throughout the collection, Cooley connects numerous geographies through stone, from “the leavings / traces of paint shadow lines / left by the Stone Sioux / called Assiniboine” to some of the history of his hometown of Estevan, Saskatchewan, writing “on the other stones we read: MURDERED / BY THE RCMP  chiselled & removed & / later on a yellow once again on the grave / stone Beinfait cemetery & went on” to other stone, writing “centuries later / Napoleon’s armies hauled it up / up it rose from the ruins of Rosetta / rock out of a frost boil you might think / or petrified gland [.]” Through Cooley, stone becomes a central image of language, translation and memory, all composed as a series of extended permanences. Cooley wanders world histories, pre-history and prairie histories, collaging short lyric sections composed in a variety of styles that manage to hold together through the assortment, much in the way he did in his infamous early work, Bloody Jack. In another section of the stones, he writes: “Europe is a series of rockpiles / people live inside. Cave people / then, cave people still.”

They were here too, the people who set them, the stones, rose up in their magic of flesh. Were they shocked that they could move and talk, touch other flesh, feel panic flash and go out? Must have wanted to swim in it, enmeshed, speckle the dark waters. Knew what it was to be, quick, and chancing. And afraid.
Must have sensed bodies are flasks you drink from. That skin stretches over earth, a tattoo of stone, people’s movings, to and fro. Over the face of the earth. Time closes.
Stones, they must have thought, someone must have, are the earth’s bones, sloughed. What flesh was set on, tied to, pegged upon, hung from.
Minerals were earth’s veins—what against the body’s resistance, they wrote. The earth was one big body, it huffed and ambled, shuffled and bled. It belched and rolled, breached and heaved. In its wind was breathing and in rain something else. Small insects eating their way through the earth, scratching the skin, burrowing into mines. And they fell into the mind’s depletion, chewed te veins out of the dark and the cold and when sun struck straightened.
Billions of explosions prowled in storms no one could see coming and went off bewilderingly inside. Told them stories of how the world moved in dark and disarray.

Cooley has long favoured explorations of prairie language and the jagged, staggered line as well as the large poetic project, including the multiple publications that fall into his ongoing “Love in a Dry Land” project [see my piece on such here], such as poems published in Sunfall: new and selected poems (Toronto ON: House of Anansi, 1996), to the “Dennis Cooley issue” of Prairie Fire (1998) and the trade volumes Country Music: New Poems (Vernon BC: Kalamalka Press, 2004) and The Bentleys (University of Alberta Press, 2006). This new work, the stones, write out what he has referred to before as his “vernacular prairie.” To consider the poetry of Dennis Cooley is, among other things, to reconsider space, as well as the vernacular voice, and twisting of the language through bad jokes and puns, taking each further than any other poet would. For Cooley, one of his essential movements is through the line, correct or otherwise, given best voice through his magnificent essay on line breaks in his collection of essays, The Vernacular Muse (Turnstone Press, 1987). In correction line, he composed the line as one to be reworked and corrected, as well as referencing the actual lines of correction that stretch across the prairies. In the title poem to correction line he wrote: “it was at the correction line / they made their mistake / big mistake you might say,” continuing a narrative of geographic surveys in poetic form, Cooley writing the same terrain, fielding out his lines from all points in, out and between his Estevan and Winnipeg. Or, in another piece, referencing both geographic lines and the poetic line of American poet Charles Olson, suggesting what would come next, to peer at what lay beyond the surface:

an O pening
of the   field