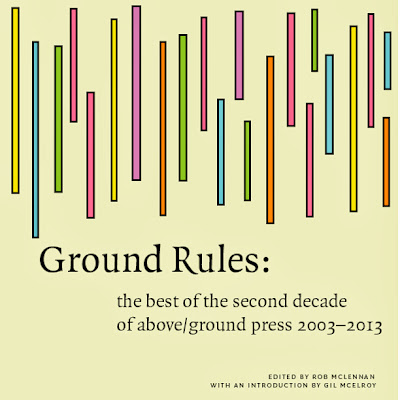 Since Ottawa literary publisher Chaudiere Books was founded by Jennifer Mulligan and rob mclennan in 2006 the press has produced an impressive thirteen titles of poetry and fiction (including a couple of anthologies) by writers both emerging and established. Originally founded in part to advocate for the enormous amount of literary activity around Ottawa, Chaudiere has produced single-author titles by a number of locally-based writers including Nicholas Lea, John Newlove, Anne Le Dressay, Monty Reid, Pearl Pirie, Marcus McCann, and Clare Latremouille. Attempting to engage Ottawa writers in a conversation with writers across Canada, the press has also produced works by Meghan Jackson, Michael Bryson, and Joe Blades. Unfortunately, due to a series of life events and sundry other things, the press has been unable to keep to a regular schedule since 2010.

Co-founder Jennifer Mulligan officially left the press earlier this year to focus on her work in film and Ottawa poet, designer, and book conservator Christine McNair has stepped in to fill the role of co-publisher. With the assistance of Monique Desnoyers (web designer) and Stephen Brockwell (sage advice); we've been enormously busy over the past few months (apart from the fact that McNair and mclennan are expecting a child any day now) working towards a return to a proper publishing schedule, beginning with the publication of our first new title in December.

This is a rebuilding year for Chaudiere Books, and we will be announcing an Indiegogo Campaign in January 2014 which will feature a whole slew of incentives from our backlist; new and old limited edition rarities from writers both new and established; and a few surprises. The campaign will coincide with announcements of forthcoming titles and launches in 2014.

The first title of the official Chaudiere Books re-launch is Ground Rules: the best of the second decade of above/ground press 2003-2013, edited by rob mclennan with an introduction by Gil McElroy. In many ways, Chaudiere Books has always been the trade extension of the chapbook publisher above/ground press and this title cements and even clarifies the associations between the two presses.

“Working out of Ottawa, poet and publisher rob mclennan's baby, above/ground press, marks a second decade of the production of broadsheets, chapbooks, magazines, and anthologies that trace out the best shapes of the best of contemporary Canadian (and, increasingly, international) poetry. From the span of that second ten of years, he has compiled this book of traceries: a selection of work by writers ranging from the likes of the late Artie Gold, and Robert Kroetsch, to the living Derek Beaulieu, Rachel Zolf, Eric Folsom, Natalie Simpson, etc., all collected here as representative of a decade’s aesthetic count.”
from Gil McElroy's “Introduction: An Integral”

The Ottawa launch of Ground Rules is scheduled for Saturday, December 7th 2013 at The Manx Pub and is sponsored by the Ottawa International Writers Festival. Lovingly hosted by rob mclennan, the event will feature readings by three of the book’s contributors (to be announced over the next couple of days). Watch for details via the Chaudiere Books blog, as well as our Facebook page!