Because poetry is very, very far from –
and those who therefore thrive insist it remain so

Plus flaccid fraternities with their
heightened-flaccidity-as-aesthetic-mandate flail, swing

And wasn’t this ambition supposed to be in the writing, not in the
product? In tenor and vehicle and not in laurel and mantle?

Fuck me. I’m as flail as anyone 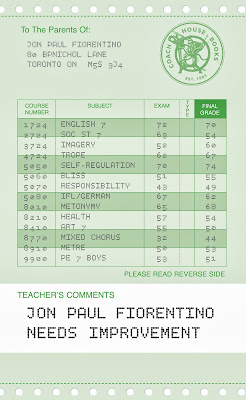 Montreal writer and Winnipeg ex-pat Jon Paul Fiorentino continues his persona of the ‘beta male’ (although far softer here than in previous works) through his sixth trade poetry collection, Needs Improvement (Toronto ON: Coach House Books, 2013), from the cover image of a mediocre report card (including subjects “trope,” “imagery” and “self-regulation”) to the subtle thread that stitches his lyrics and post-lyrics together into an extremely tight and taut collection. Fiorentino’s poetry is thick with references to misspent youth, the City of Winnipeg, recreational pharmaceuticals, clinical depression, Montreal and juvenile humour, and his poetry has evolved over the years into an impressive staggered and studied post-language lyric. Over the stretch of more than half a dozen trade titles – including two works of fiction, and previous poetry collections Indexical Elegies (Coach House Books, 2010), The Theory of the Loser Class (Coach House Books, 2006), Hello Serotonin (Coach House Books, 2004), resume drowning (Fredericton NB: Broken Jaw Press, 2002) and transcona fragments (Winnipeg MB: Cyclops Press, 2002), as well as the chapbook hover (Winnipeg MB: Staccato chapbooks, 2000) – Fiorentino has learned to play his combination of dark and flippant tone as less of an overpowering force than a simple and subtle distraction that actually masks his movement into entirely different subject matter. I find it interesting that Fiorentino’s poetry has evolved into more conceptual veins, including the “pedagogical interventions” in the title section; utilizing manual illustration, satire, appropriation and manipulation, Fiorentino has widely expanded his ouvre far beyond the once-core of his work in the prairie long poem, and managed to craft questions far more important than the answers.

The visual poems he includes are reminiscent slightly of those by former Vancouver poet Jason Le Heup a decade or so back, as well as other works through and around the Toronto Research Group (bpNichol and Steve McCaffery), and blend perfectly with the rest of the collection [see an example of such here]. Composing poems both lyric and visual, the poems in Needs Improvement attempt to explore, explain and even obscure theory, and even opens with a quote by Judith Butler: “Neither the Austinian promise nor the Althusserian prayer require a pre-existing mental state to ‘perform’ in the way that they do.”

Some of the poems in this collection previously appeared as the chapbook The Winnipeg Cold Storage Company (Calgary AB: NO Press, August 2012), including works that focused on mythmaking and geography, working over, across and through his hometown of Winnipeg, as he does more specifically in the title poem to the chapbook, included here as well:

In the colophon of the chapbook, he wrote that “The text from ‘Winnipeg Cold Storage Company’ is appropriated and manipulated with the most love from Excitable Speech: A Politics of the Performance by Judith Butler.” Composing poems as lyric-fragments of losing, loss and disappearance, as well as a section of report cards exploring bullying through satire, Fiorentino manages to turn information against itself, even to the point of working to say nothing at all.

Down to my last
lyric

Do you know the word pilling?
It’s a piling on of fabrications

You wear it well or
wore it

I saw an old cancerous friend here
who said, ‘I remember when I used to be creative –

They cut it out of me
all interstitial-like’

Now, the lies and years are
piling/pilling

I will miss you when you shun me. I write these
things for nothing

You remain
the best nothing I know