Finley John and Julia McRae McLennan and family, circa 1910 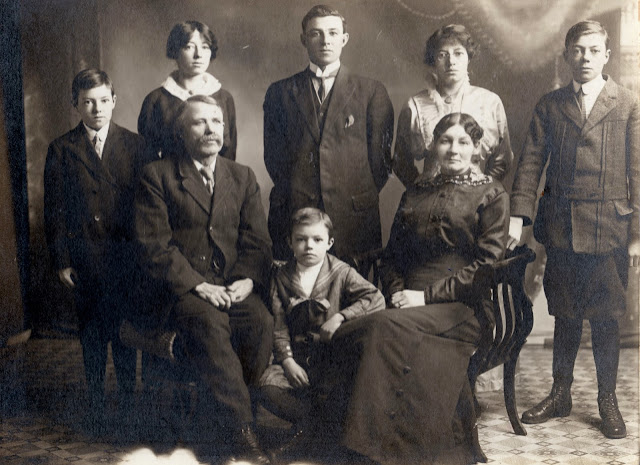 I’d only ever seen the photo in my father’s copy of Maxville: Its Centennial Story, 1891-1991(1991), a photo presented along with information on our family by one of my father’s older cousins (my father appears to be the youngest of that particular generation). Unfortunately, some of the information this cousin presented was not only twenty-five years out of date, but incorrect (my birth year is wrong, for example). It made me not trust the information on us that had been provided, and triggered my interest in properly pursuing genealogical work. After a decade or more of attempting to get a copy of the photo from this particular cousin, I simply gave up.

Finley John and Julia lived next door to where our homestead currently stands, inheriting his uncle Roderick McLennan’s (d. 1873) farm when he died, inherited under the stipulation that Roderick’s widowed mother, Christina McLennan (born in Scotland, she died October 4, 1912 at 81 years), as well as his sister Mary (d. January 29, 1887, at 64 years) would be cared for. The McLennan family Bible, still in my father’s house, was actually a wedding present to Finley John and Julia, who married on February 23, 1888. The house that currently stands on their former property is actually the third (at least) to stand, as the house Roderick would have lived in sat slightly back from the current (you can still see the remains of the foundation), and at least one further (for Christina and Mary) sitting closer to the front of the property. It was actually Roderick McLennan who originally purchased the two hundred acre lot 3, concession 7, Roxborough, from the crown April 10, 1845 (where my father, as well as my sister and I, grew up), only to purchase the one hundred acres next to it, lot 4, concession 7 in 1860 from James McDonnell, the original owner (after Rory’s death, Margaret married Angus MacDonald of Sandringham). Given that he was still listed in the census in 1851 in Lancaster, I’ve long suspected that Roderick never actually lived on the original property, but moved out in 1860 to land that was, instead, already cleared.

The farm next door to where my father currently lives was in our family from 1860 until my great uncle Scott finally sold the property (selling parts and parcels off over a stretch of years) in 1955, when he and his wife Janie retired to Ottawa. Since my grandfather was the youngest, he moved across the road from his own homestead after he married (while still working the home farm with his elder brother, Scott), in a log house where my father was born, and where my grandmother not only widowed, but my sister now lives with her husband and three children. At the corner of my sister’s property, apple trees the only evidence of where a one-room schoolhouse once sat, where my great-grandfather and his siblings, as well as some of his children, would have schooled, abandoned around the time my grandfather was born. When my father was less than a year old, he and his parents moved to where my father has remained since. 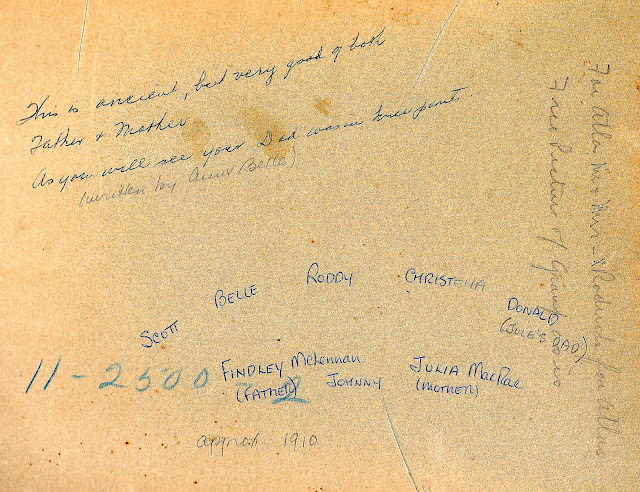