Danny Jacobs, Songs That Remind Us of Factories

Look: they came with the place,
roof’s half-assed shot at Gothic,
bent spikes riding the arch of it,
wires spidered on eave and gable
to ground volts til the maple
roots jerk in their soil. Suspect
if ever they caught sky’s lit wick,
charmed cloud to mossy shingle.
Before the walls get bulldozed
and the beams fall in, my uncles
and I might straddle the ridge,
grab lengths of rebar and hope
for storms—the copper funnels
of our spines fine-tuned conduits. 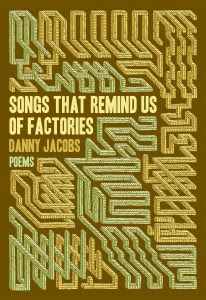 In Riverview, New Brunswick poet Danny Jacobs’s first trade poetry collection, Songs That Remind Us of Factories (Nightwood Editions, 2013), he displays a clear ear for sound, composing lines with a crackle-pop sensibility that holds both music and the attention of a descriptive narrative lyric. Given the book’s title, as well as in poems such as “Pipeline,” “Lawn Boy,” “Weeding,” “A Fifth Factory” and “A History of the Billiard Ball,” Jacobs’ work can be seen, in part, as a product of the work poetry that emerged out of Vancouver in the 1980s – poets such as Tom Wayman, Kate Braid, Erin Moure and Phil Hall. Their writing (as well as Wayman specifically in a number of essays) argued that poetry should and/or could be about working class considerations, such as physical and low-income labour. Wayman, one of the co-creators of The Kootenay School of Writing, argued vehemently for more of a straight poetic line than any play with the language (which caused eventual conflict and even a break between various of the KSW camps), and it would seem as though Jacobs is still negotiating between two traditions that he is still working to bring together, in his own way. In Jacobs’ collection, as capable as it is, sometimes his narratives aren’t enough to hold my attention, and sometimes the language isn’t enough to properly propel the story, leaving me feeling adrift in two directions. There are elements of both that are strong, but they don’t always manage to connect. In the poem “BARGAIN BIN,” for example, the use of the word “ridden” twice in the last two lines just feels clunky.

The whitewashed drywall woke as BiWay
and I, nigh on eight, decried the toy display’s
lack of good Lego, all knockoffs and Duplo.
By grade five she was re-signed and sold to
Woolco, this before a brief stint as SAAN –
weak real estate’s circadian rhythm,
same shit different aisle, bins of Bugle
Boy and bungee-roped rubber balls, back stock
unboxed and marked for blowouts. While frugal
ladies lollygagged and haggled, made slapdash
muzak in the key of jangled hanger,
in walked the new century to sweet talk
the walls into fishnets of fibre-op,
row the floor with chain gangs of chopped desktop
Dells. Before long we’re in for the long haul,
twitchy phone pitch wizards picking foam
from levered ergo-thrones. A banner snaps
epileptic in the parking lot squall,
screams Join the Team; they’re roping in
hopefuls with a flair for the upsell. We’ll
bid on hours and carpool to the nightshift,
parse new mall smell from dying small smell.
The food court’s robot, once ridden for
a quarter, is just not ridden anymore.

When I think of poets who have negotiated a successful blend and interplay between formal language and language and/or sound play in their own work, I tend to think of David McGimpsey, Lisa Jarnot, Phil Hall, Lee Ann Brown, Karen Solie, Lisa Robertson, Ken Babstock (there seems quite a heavy Babstock influence here) and Elizabeth Bachinsky. This interplay seems very much what Jacobs is working to achieve. Where Jacobs does shine is in those poems where he allows description to move beyond itself, allowing description as a means to an end, as opposed to an end unto itself. And it’s a fine line he plays – how do you elevate a poem on “subject” beyond subject matter without excluding or completely abstracting it? Poems such as “BETTY GOODWIN SOUND INSTALLATION” or “THREE FRAGMENTS TO HER HAND” are quite striking in part because they aren’t there to describe, but sparkle, spark and simply be. I admit that I am intrigued by, but uncertain of the poems of Danny Jacobs; I am curious to see where he might go next.

Giddy with the Carboniferous, I huff up
the bluff’s pitch with a ten-pound slab
just pinched from Blue Beach: sheaves
of pressure-stamped era
collated from the Book of Lith,
straight-cut rhombus sheared off
from nature’s packed-
down less. Rock’s biopsy sample,
deep-time casserole, inch-thick glued-shut
hardback from some bygone zoic.
Plumb enough to upright on bookshelves,
each waterlogged page is a thousand years
of coal swamp, river dreg; one black-rimmed
hair’s width the pressed leaf
of a generation’s bad weather. Tucked somewhere
between sandstone and shale, a love letter
to the Law of Superposition:
a single footprint from a flathead tetrapod
scouting the Late Devonian, tube sock of axons
taunting gravity with a new backbone,
calling us back to mornings
when we half wake, still slaves to
hindbrain, to stretch our spines, sniff the air.

Posted by rob mclennan at 9:01 AM
Labels: Danny Jacobs, Nightwood

o the sound of--
o the feel of--
those lines broken,
like that.
Thank you.