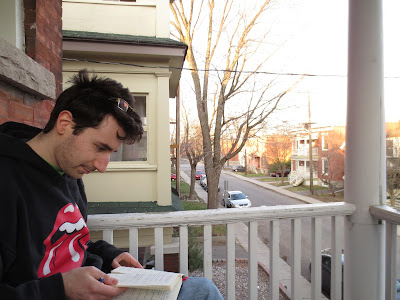 Jeff Blackman grew up in Thornhill, ON, but now earns his bread & butter in Ottawa. His poems may be found across the Internet, but contact Apt. 9 Press for So Long As The People Are People in which all the words are in the right order. Visit jeffblackman2001.wordpress.com to keep up to date with his projects and performances. He will return in Poem Another Day.

1 - How did your first chapbook change your life? How does your most recent work compare to your previous? How does it feel different?
It was a passport to a community. I'd been attending In/Words readings for a year, and many regulars were showing up with enchanting chapbooks, and figured, why not me too? I put together my best poems of the three or so years' prior, effectively the extent of my experience as a poet. That book was mumble something pink, summer 200?, which In/Words would then republish the following fall.

So Long As The People Are People, I've been thinking, is very similar. It too is a 'best-of-three-years,' roughly spanning the length of marriage thus far with Kate Maxfield. I've had about a half dozen other chapbooks between mumble' and 'People, but these two feel very similar with their focus on politics, isolation, desire for recognition, and relationships. This is also my first return to prose poetry since those early books.

2 - How did you come to poetry first, as opposed to, say, fiction or non-fiction?
One of two ways: When I was ten I became obsessed with the collected works of Weird Al Yankovic and spent years writing song parodies no one heard (I was very shy until late in high school). In grade thirteen I fell in love. I'd been writing left-wing rants & short stories for a few years, but it was through poems - mostly stream-of-conscious style mishegas - that I put my feelings together, or at least got out something I could stand behind. In speech I could only praise this person; in writing I had a little more leeway to capture the whole gamut of the romance. I never felt I had to apologize for my poems, though I'm certain some have hurt others. The relationship was over relatively quick but by mid-year I had written a chapbook worth of poems, had I the guts or community to encourage me.

3 - How long does it take to start any particular writing project? Does your writing initially come quickly, or is it a slow process? Do first drafts appear looking close to their final shape, or does your work come out of copious notes?
It varies. Typically I'm a lazy writer and if it doesn't come out great (IMO) at first, it sits around a while. Some of my projects took a while. For instance BLIZZARD: Ottawa City Stories I wrote with Peter Gibbon, which entailed a two-year-long process that saw us begin, develop, mature, and complete whole sequences of poems & storylines, only to abandon them when we realized we'd written ourselves past where we were. It's very important to stay true to the feeling behind a poem. Shiva After Shabbas, which I wrote after my maternal grandmother died, came together in a matter of weeks.

4 - Where does a poem usually begin for you? Are you an author of short pieces that end up combining into a larger project, or are you working on a "book" from the very beginning?
Attempts at "books" first typically flounder for me. I tried writing a set of eight long poems inspired by Super Mario Bros. 3 (and its eight worlds), but a perfectionist streak prevented me from finishing more than a couple. I'm an admittedly lazy guy, and have been finding myself more productive when I just try to write regularly and piece things together as I can. I definitely get hung up on themes, images, phrases, and resultantly wind up with threads I'm sometimes lucky enough to detect.

5 - Are public readings part of or counter to your creative process? Are you the sort of writer who enjoys doing readings?
I love doing readings. I used open-mikes as opportunities to test-drive most of So Long As The People Are People's contents. I love entertaining people, and now I have a lot of funny poems, which I know off by heart. I also feel poets should do their darndest to "just get it out there," as my friend Jordan Chevalier would say, and readings are accessible vehicles for that.

6 - Do you have any theoretical concerns behind your writing? What kinds of questions are you trying to answer with your work? What do you even think the current questions are?
I'm terrified of dying, of people I love dying, but am constantly free from threats - so that's been a theme the last year I can't shake. A lot of my work lately has also had a sort of self-help style to it, where the poem's speaker gives instructions or advice. Figuring out how to deal with, I dunno, life, everything, starts with writing usually or, if I'm feeling gutsy, a good talk with Kate or another close friend. Lately those conversations have spawned poems bordering on dictation.

8 - Do you find the process of working with an outside editor difficult or essential (or both)?
Not sure how to answer that. My only recent experience with an editor is for my latest book, and before that poems emerged out of collaborative efforts or were vetted by writers' circles. I have had many good friends read manuscripts of mine and give feedback that's been essential to my development. The best, at least towards 'People, was from Ben Ladouceur, who told that if I'm going to be cryptic I might as be grammatically sound.

9 - What is the best piece of advice you've heard (not necessarily given to you directly)?
"Write it till it runs clear," said Ivan Coyote, which I read secondhand via Jeremy Hanson-Finger. To me, that means just keep writing it again and again, from start. Destroy old drafts and write what you remember. Get at the current of the art, rather than sit about making sandcastles on the shoreline.

10 - How easy has it been for you to move between genres (poetry to fiction to critical prose)? What do you see as the appeal?
I've had a hard time writing fiction lately, and haven't written much critical prose other than an entry in How about some poets? Some Incomplete Memoirs of In/Words. My job (research analyst) demands a lot of mental energy, and I'm writing a lot for that (e.g., literature reviews, case studies, borderline science), so I can only push myself to commit to so many words in my spare time. When I do get myself on a fiction kick, or a critical kick, I guess the appeal is that my perfectionism takes a chill pill, and I can just gush. Makes for hard editing sessions though.

11 - What kind of writing routine do you tend to keep, or do you even have one? How does a typical day (for you) begin?
I don't have a routine. Most days begin when I finally decide I need to get up for work or other obligations. I usually write at night, but I have no routine. I don't even like buying coffee at the same place, or taking my coffee a consistent way. Routine might do me good, but I enjoy my longstanding approach: write when I want, or feel I must.

12 - When your writing gets stalled, where do you turn or return for (for lack of a better word) inspiration?
Sometimes it's to my own previous titles to recall what I feel remains strong. That can give me a burst of confidence, and that's typically what stalls me (i.e., lack thereof). Emailing old friends (who are also writers) often gets me going too, particularly so if they have something on the go, which might spur me in almost competitive sense. I've conceded I'll always be jealous of my friends' success, so I might as well try to best them rather than mope about it. Talking with Owen "Billy Ruffian" Hewitt helped me figure that one out. Yah – I think it's friends that keep me at.

13 - What fragrance reminds you of home?
Pledge.

15 - What other writers or writings are important for your work, or simply your life outside of your work?
I've only read a fraction of his work but Allen Ginsberg is right up there on a throne, in both terms of artistic and life guidance (though I'd never live like he did not in a million years). Lately Wendy Cope has reminded me poetry can be fun (feel like there's a terrible dearth of sad poetry out there, or at least that sad poems are always preferred by mag editors to happy ones). I have a lot of friends who are great writers too, some who I've mentioned, and others I haven't. Some are burning up the reading-scene and major mags; others you need to know to read. They all push me to try more.

16 - What would you like to do that you haven't yet done?
Um, broad scope, no? I guess travel indefinitely. That'd be a dream come true.

17 - If you could pick any other occupation to attempt, what would it be? Or, alternately, what do you think you would have ended up doing had you not been a writer?
Funny question, as it's only fair to say I'm a research analyst first and poet/writer second. I guess journalist. I was on that trajectory a while and didn't think it was for me. I'd like to give it a shot one day. That or comedy writer.

18 - What made you write, as opposed to doing something else?
It was liberating. I was that one kid in high school who gave a damn about world events. 9-11 + an inspirational grade 12 English Teacher (Ms. Louise Kee, York Region School Board) = yeah, Jeff, you need to keep writing.

19 - What was the last great book you read? What was the last great film?
Book: Asleep: The Forgotten Epidemic that Remains One of Medicine's Greatest Mysteries by Molly Caldwell Crosby. It's about the 'sleeping sickness,' encephalitis lethargica, but focussed on major players in the plague's spread through New York in the 1920's. Absolutely haunting; definitely a necessary accompaniment to all these movies where people die by the neighbourhood.

Movie: Beauty is Embarrassing, the Wayne White Story. It just made me feel happy.

20 - What are you currently working on?
Justin Million & I are working towards a number of collaborative products. The first—an attempt at a chapbook—didn't make its deliverable date (the In/Words reunion reading in June), but we did get a chance to read a lot of its poems. It will come out, hopefully mid-summer or so. Think the Strip Club at the End of the Universe. Now picture the two guys out front chain-smoking because being inside makes them uncomfortable. Ok, now steal their diaries.