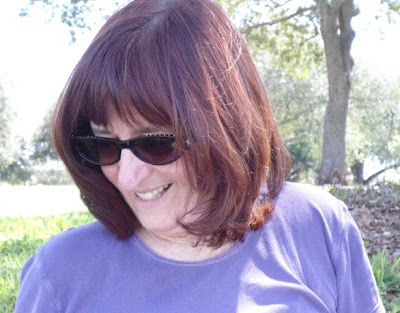 Maureen Seaton has authored fifteen poetry collections, both solo and collaborative—most recently, Fibonacci Batman: New & Selected Poems (Carnegie Mellon University Press, 2013), Two Thieves & a Liar, with Neil de la Flor & Kristine Snodgrass (Jackleg Press, Fall, 2012). She is co-editor, with Denise Duhamel and David Trinidad, of Saints of Hysteria, A Half-Century of Collaborative American Poetry. A memoir, Sex Talks to Girls (University of Wisconsin Press, The Living Out Series), won the Lambda Literary Award. She has received numerous honors including the Lammy and the Iowa Poetry Prize for Furious Cooking, the Audre Lorde Award for Venus Examines Her Breast, the Eighth Mountain Poetry Prize for Fear of Subways, the Society of Midland Authors Award for The Sea among the Cupboards, the NEA, and two Pushcart prizes. She writes an online at http://almostdorothy.wordpress.com/category/themes/glit-lit/ Her website is:  www.maureenseaton.com

1 - How did your first book change your life?
I wrote The Sea among the Cupboards when my children were at their father’s every other weekend. My life had changed catastrophically. The poems gave me a way to stay in my life—to stay alive, actually.

How does your most recent work compare to your previous? How does it feel different?
I don’t try to write “poetry” anymore, or at least not very often. I stopped after my fourth book, although there was a lot of overlap—for example, I still like to try terza rima on occasion. But I’m no longer concerned much with what a poem is supposed to be formally. I transitioned unconsciously to the prose poem early. Then I started to collage, manipulating fragments and chunks of text, mostly my own, but sometimes found, and began to be excited about process and parataxis during the writing of my third book, Furious Cooking, and went completely collage by my fifth book, Venus Examines Her Breast. The line became less important, the sentence and its fragments intriguing. I was still attached to narrative and I sometimes wondered if I was writing poetry anymore. Maybe they were stories with a lot of language play. Finally, I stopped analyzing and just wrote.

2 - How did you come to poetry first, as opposed to, say, fiction or non-fiction?
The idea of actually being a poet was suspect to me with two children to raise, so I didn’t consciously arrive at poetry. It seemed self-indulgent and, frankly, insane on some practical level. I couldn’t stop it, though. It had me by the throat.

3 - How long does it take to start any particular writing project? Does your writing initially come quickly, or is it a slow process? Do first drafts appear looking close to their final shape, or does your work come out of copious notes?
The length of time varies unpredictably. Then, yes, yes, yes, and yes.

4 - Where does a poem usually begin for you?
Early on I had an internal reservoir where the poems seemed to be. I needed solitude to mine that material. Then at some point the idea of play took over, making something from scratch and surprising myself. It started to feel more communal to me as well, less individually sacred. Often a poem will begin as I’m writing around other writers. I wrote for years with my Columbia College (Chicago) students because they have luxurious four-hour workshops there and I always opened the class with everyone writing for ten minutes. Now many pieces begin in collaboration with another poet or visual artist. That intimate energy works for me. When I do write solo it often begins on the road, near a lake, or when it’s raining.

Are you an author of short pieces that end up combining into a larger project, or are you working on a "book" from the very beginning?
I’m not often concerned with the book my poems might be making. I sometimes wish I could be, because then I believe I might actually write something like The Shipping News. If I could envision, that’s what I’d do. A long lyric narrative. So, yes, usually shorter pieces pile up until I make something cohesive out of them, which is fun too.

5 - Are public readings part of or counter to your creative process? Are you the sort of writer who enjoys doing readings?
When I began to write I had no idea there were living poets who did readings. I did not know a single living poet until I’d been writing for a couple of years and then I met David Hernandez in Chicago and went to see him read. He was amazing, of course, and so I decided it was something I would never do. When I began to be asked, I did it against my better judgment and, sure enough, it was not fun. My friend Barry Siebelt, a theater director, advised me to do as many readings as possible to get over my stage fright. I tried that. Then I withdrew completely for a while. Then I tried it again and it was almost fun. Now I’m completely relaxed when I’m at a mic. I think it was being in front of the classroom for so long that finally helped. To answer your first question: for me, personally, public readings seem separate from my creative process, but I respect that performance is integral for many of us.

6 - Do you have any theoretical concerns behind your writing?
I was, at one time, planning a future in experimental psychology, so the laboratory is where I like to be. I know it doesn’t have to be either/or, and that many poets enjoy theory, are based there, situated there, are writing it or from it, sensing its weight in the writing process. I love the way Pound talks about process, how Rukeyser and Ginsberg consider the energy of poetry, the way Lorde extols the erotic. I’ve found it valuable thinking about ways to respect the reader as I write. I know that my own practice has, at times, benefitted from the theoretical concerns of others, and I also know that respecting my own practice means allowing it as much breath as possible. So, for better or worse, I keep a courteous distance from literary theory, at least from those theories I haven’t formulated myself.

1. Where does the poem live in the body? Can it heal?

2. How does the act of creating/sharing a poem change consciousness?

3. What am I contributing to the world when I write?

4. Will a mother’s self-involvement (through writing) contribute eventually to     the welfare of her children?

5. Do women and men write differently?

7. Are most poets queer in the sense that fluidity and a radical autonomy are     invaluable to our process?

8. Can a poem successfully illustrate/incorporate energies of yin/yang?

9. Is collaborative writing a feminine impulse? A queer impulse? A human     impulse that is playing more of role in the face of technology?

10. What of the “third voice” in collaboration? Is it preferable?

What do you even think the current questions are?
Anything related to technology, the world community, and, as always, to sex, death, and individual freedom. For starters. I like questions.

7. What do you see the current role of the writer being in larger culture? Does s/he even have one? What do you think the role of the writer should be?
I was lucky to find out what I loved doing when I needed it most. Whether the larger culture will benefit remains to be seen. I’m not particularly fond of roles or shoulds, of course, but I do appreciate that I learned how to be human in great part from the reading I did as a kid. Every time a fiction writer fleshes out a character, every time a poet notices and describes the ignored or the seeming incidental, we humanize. I don’t believe that’s a role. It’s simply a by-product of what I think of as good writing.

8 - Do you find the process of working with an outside editor difficult or essential (or both)?
I loved working with the editor at the University of Wisconsin on my memoir. And Jennifer Harris, publisher of Jackleg Press (Chicago), has taken a very active role in my new book of poems, and I’ve totally enjoyed the experience. I don’t know about essential, but I’d say preferable. Most poets ask other poets to read their manuscripts in different incarnations, so we become editors for each other. This works fairly well, I’d say, although the objective factor might be somewhat missing.

9 - What is the best piece of advice you've heard (not necessarily given to you directly)?
Play.

10 - How easy has it been for you to move between genres (solo to collaborative poetry to non-fiction)? What do you see as the appeal?
Moving between and among genres or modes of writing or different artistic expressions is natural for me. The appeal is that I can enjoy making art however I like without limits. It’s the way I live best.

11 - What kind of writing routine do you tend to keep, or do you even have one? How does a typical day (for you) begin?
I want to write all the time, so when I don’t have to go to my job, that’s what I do. It’s more important for me to have an eating routine or a going outside once in a while routine when I’m working on something because I can be a hermit. I don’t like the words routine or discipline. (In my world, hermits don’t have to answer to anyone.) A typical day for me begins with a smooch from my partner or puppy. (So much for hermit!) Then I see what happens.

12 - When your writing gets stalled, where do you turn or return for (for lack of a better word) inspiration?
To one of my collaborators. Or to visual art. Or to my own forgotten material or a book on science or mathematics or someone else’s poems. Or I try to get back to spirit.

13 - What fragrance reminds you of home?
Piñon.

14 - David W. McFadden once said that books come from books, but are there any other forms that influence your work, whether nature, music, science or visual art?
All of the above, with the addition of theology. I’m reading Cynthia Bourgeault, and anything she says makes me want to write.

15 - What other writers or writings are important for your work, or simply your life outside of your work?
Lately, I’ve been inspired to think differently about my own life and work as it relates to multilinguality, gender, the liminal, digital landscapes, the neonarrative, and epiphany.

16 - What would you like to do that you haven't yet done?
Live cloistered and writing for a year in a monastery with monks in New Mexico, but with really good food.

18 - What made you write, as opposed to doing something else?
Language sounds really good to me, and it tastes even better. So when I hear it near the back of my throat—words, sounds—I’m compelled to write it down to experience the music and the possibility of being in it for however long it takes to complete the poem. Then I get to see it, how it interacts with the negative space of the page: visual art. And, finally, with my ears, tongue, and eyes happy, I get to read the message. It’s an awesome occupation.

20 - What are you currently working on?
A long collaboration with poet Samuel Ace of Tucson. It’s multi-media and grounded in a kind of dark languagey surrealism. I also have an ongoing collaborative relationship with poet Neil de la Flor right now. He keeps me sane in Florida. And, as summer approaches, I’m thinking about some essays I’d love to compose while driving home to New Mexico.