Sometimes I meet an adult who has never ridden a bicycle. I am left aghast. I cannot comprehend a bicycle-less existence—to not know or want to know a bike ride. There is an ugliness to watching an adult learn to ride a bike, but we all have learning gaps. There are things I missed out on as a child, things my parents didn’t model or think to pass along to me. Organizing my adulthood sometimes feels like a series of catch-up sessions to compensate for my parents’ oversights (like how to cook, strike a match, apply makeup, pay taxes, camp, dance, celebrate, maintain close friendships, be happy…). But I am catching up, and those things absent for much of my life are starting to appear as if they have been part of me all along. 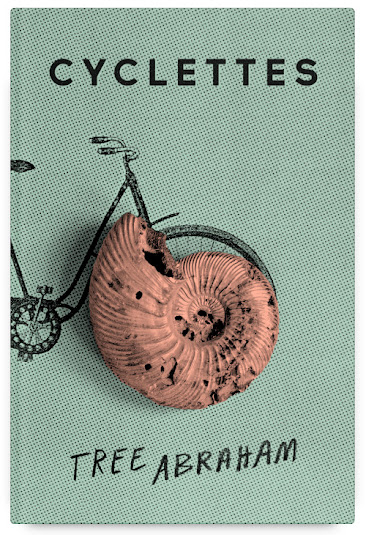 “Ottawa-born, Brooklyn-based writer, book designer, and maker of things” Tree Abraham’s book-length debut is the non-fiction title Cyclettes (Toronto ON: Book*hug, 2022), an accumulated sequence of short sections composed as an ongoing meditation on and around bicycles. Utilizing memoir, reminiscence, history and elements of design, she writes of bicycles, from her beginnings in an Ottawa suburb only a couple of miles east and south of my own, to a sequence of twentysomething travels through a variety of countries, before landing in Brooklyn, where she currently works and lives. “I began four months of study in Bangladesh.” she writes, “Cycle rickshaws everywhere. I have ridden in them elsewhere—as a child in the display at the Canadian Museum of Civilization, through a Beijing hutong, to a Jaipur market, between casa particulares in Havana, up to Kathmandu’s Monkey Temple—but never had I seen them as densely as throughout Bangladesh’s cities. They are the primary mode of transport, Guinness World Records (2015) notes the capital Dhaka as having the most cycle rickshaws of any city in the world (there’s an estimated one million rickshaws for a population of 8.9 million). They are compact enough to weave through heavy traffic, fuss-free to use in flooded streets during monsoon season, and affordably acquired and maintained by drivers who are typically of the poorest class.” She writes of bicycles as journey, purporse and destination, and her descriptions exploring the realm and range of adult possibilities are reminiscent in tone to Toronto poet and critic Emma Healey’s recent Best Young Woman Job Book: A Memoir (Toronto ON: Random House Canada, 2022) [see my review of such here]. Abraham’s Cyclettes is simultaneously a memoir propelled through a conversation on and around bicycles, and a book around the history and importance of bicycles propelled through a coming-of-age memoir of being, becoming and landing, including a stop in Sreemangal, as she writes: “Each time, I was reminded that while I was testing my aptitude for adulthood, stretching the boundaries of how far I could go into unmarked territories while still remaining intact, I was but a sideshow in other people’s everyday lives.” As well, one could make comparisons to Canadian expatriate prose writer Anik See’s work, allowing a description of and conversation around travel (especially via bicycle), including her Saudade: The Possibilities of Place (Toronto ON: Coach House Books, 2008) [see my review of such here]. Blending threads of research and experience, journey and discovery, Abraham feels out the possibilities of adulthood, seeking knowledge, truths and other elements across a wide spectrum, riding on and along two wheels.
Posted by rob mclennan at 8:31 AM
Labels: BookThug, Tree Abraham