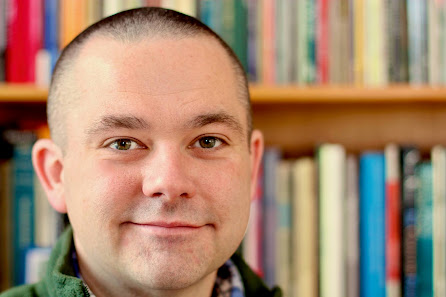 Brian Simoneau is the author of the poetry collections No Small Comfort (Black Lawrence Press, 2021) and River Bound (C&R Press, 2014). His poems have appeared in Boston Review, Cincinnati Review, Colorado Review, Crazyhorse, Four Way Review, The Georgia Review, Mid-American Review, Salamander, Waxwing, and other journals. Originally from Lowell, Massachusetts, he lives near Boston with his family.

Well, one of my daughters says it made me famous, but of course I really didn’t expect the first book to change my life. It did, however, bring some wonderful people into my life. I did a bunch of readings from River Bound when it came out—in New England and New York and Washington, D.C.—and along the way I met some poets whose friendship has become really important to me. Knowing our work is all out in the world together, that feeling of being in community with other poets and writers, was probably the best thing to come from publishing that book—especially as I worked on this new one, which does feel very different to me. Many of the poems in River Bound are elegies for my father and for the city of Lowell, Massachusetts, where I grew up, but No Small Comfort gathers poems about moving past grief and becoming a father and trying to make a home wherever I find myself.

I came to poetry mostly through music: listening to the radio and records and 8-tracks and always, always, always singing along. My mom in particular listened to all sorts of music—Peter, Paul, and Mary, Bob Dylan, James Taylor, Carole King, The Bee Gees, Diana Ross, Barry Manilow, Van Morrison, the Jackson 5—and I’ve never stopped. As a teenager, I listened to anything and everything, and I wanted to absorb it all: the music, the lyrics, the different perspectives. Growing up in Lowell, I’d learned about Kerouac, so some of the first poets I read included Allen Ginsberg and Gregory Corso, and then I just started exploring poetry the way I’d always scanned the radio or searched the CD bins at Newbury Comics.

My process is so slow. I keep a poetry journal where I collect ideas and lines and drafts, but then I might wait months (or even years!) before typing something up and thinking of it as an actual poem. The final poem in No Small Comfort, for example, started way back in 2003 as pages of notes on a yellow legal pad; by my count, it went through more than twenty drafts before I “finished” it last year. It’s not usually quite that bad, but I do let drafts sit for a while.

Each poem begins somewhere different for me: a line from another poem, a song lyric, something I see out the window or during my walk to work. I definitely work on individual poems, and then every once in a while I look for connections or threads, obsessions that might allow for the poems to fit together as a larger whole.

Readings make me really, really nervous—I’m always tempted to get up there and start reading other people’s poems instead of my own—but once I’m there, I do enjoy them. I love reading alongside other poets and writers, and I love hearing their work and chatting with them during a Q&A—it’s that feeling again of being in community with writers and readers.

I’ve always struggled with a sense that my life has moved between two worlds: a working-class community where I grew up and a community of writers and teachers where I’ve made a living. And so, for a while, I tried to write from a Marxist framework, and my work explored how poetry itself might become an artistic and political representation of class consciousness. I’ve always been sort of obsessed with the elegiac tradition, too, and eventually the poems that would become River Bound started exploring both my relationship to my hometown and the process of grieving my dad’s death. Especially since becoming a dad, I think often about the future my daughters will inherit, and I’ve been writing more and more about ways urban and suburban places conflict with our ideas about nature, about ecology and the ongoing climate crisis, about the violence we bring against our environments and against each other, and ultimately about the moments of beauty that can be redeemed amid so much conflict.

I do think that writing poems is itself a political act, that it’s impossible to separate my writing from the cultural moment in which I’m making it. For me, writing then becomes a way of creating space for the imagination, of insisting that the imagination be a part of every day.

I love working with editors, and I’ve been lucky to work with some incredibly generous ones, including Jody Bolz at Poet Lore, Stephen Corey at The Georgia Review, Allison Joseph and Jon Tribble at Crab Orchard Review, and, of course, Diane Goettel at Black Lawrence Press. I’m grateful for all the ways they’ve made my poems better, but it’s also been essential for me to become an effective editor of my own work.

I have a newspaper clipping a friend sent me when I was in graduate school. Stanley Kunitz had just been named poet laureate at the age of ninety-five, and in this article he says, “I don't believe in writing every day, though I’m at my desk every day. So much of writing is thinking before you write, reading or simply brooding.” For me, it’s been all about the “brooding” ever since.

I always wish I were better at making time to write more critical prose, but I’m even slower with prose than I am with poems. For me, the two fit together in really important ways. Writing book reviews makes me think explicitly about what I expect from poetry, which in turn helps me articulate what I want my own poems to be doing. Plus, writing reviews gives me a chance to spread the word about some of the books I love.

I try to stick to a reading routine—I aim to read one hundred books every year—but I tend to write drafts in bursts. At least one month a year, I gather online with an amazing group of friends and try to write a new poem every day; we post brand new drafts to a group blog, we borrow and steal lines and titles and prompts from one another, we offer encouraging comments, and we usually come away with lots of good beginnings. Other than that, I don’t have much of a writing routine, or maybe it’s that my routines have constantly changed with each new stage of my life. Also, I’m a terrible, just terrible, morning person, so my typical day begins very slowly, and then we get our daughters off to school, and I usually have a first-period class to teach. I’ll sometimes make time for writing in the late afternoon or at night, but a lot of my writing comes on the weekends.

I mostly turn to poems that are new to me, or to music. Walking beside a river helps, too.

On any given day, there might be any number of forms that help to shape my writing: the visual arts, nature, baseball, Twitter, sitcoms, scientific fields like astronomy, geology, and ecology. It surprises me, but I’ve come to think prayer has also been a big influence on my poems. I’m no longer religious at all, but I grew up in a Catholic family in a Catholic neighborhood and went to Catholic schools through high school, and I think I took away something about litany, about ritual incantation, about story and reflection occupying the same breath. Of course, music has always been the biggest influence for me: my earliest poems were bad impressions of Kurt Cobain’s lyrics, and I listen to music whenever I write—even now, answering these questions, I’ve been listening to albums by Sharon Van Etten, the Pixies, and Durand Jones & the Indications.

This answer feels like cheating, but everything I’ve ever read has been important for my work in some way. Philip Levine and Gwendolyn Brooks are some of the first poets whose work felt like permission to write poems about myself. I’ve learned so much from John Donne’s poems, from the Old English riddles in The Exeter Book, from essays by James Baldwin and Barry Lopez. There are so many poets—like Larry Levis, Aimee Nezhukumatathil, Campbell McGrath, Li-Young Lee, Ross Gay, Diane Seuss, Major Jackson, and my teacher Dorianne Laux—whose work I go back to again and again and again. And then there are too many friends to name, both in “real life” and online, whose work as poets and teachers and parents sustains me daily and helps me feel part of a community. That list would go on and on.

I’ve always thought I might like to try music production—I’m a reasonably terrible musician, but I think I have a pretty good ear for how sound comes together, for how different pieces become something whole—but I teach high school English, and I’m pretty sure I’d be doing this job whether or not I’d kept writing after college.

So many of the people I’ve loved have been writers in some way or another—the singers and poets and novelists and teachers and storytellers—and I’ve always wanted to be in community with them.

I recently read The Galleons by Rick Barot and couldn’t resist stopping to re-read every single poem. I tend to watch more TV shows than films, and I really love BoJack Horseman. And I can’t resist sharing a music pick: Julien Baker’s Little Oblivions is absolutely brilliant.