At 13 i saw
the 10 invisible letters
of the alphabet. All my life
i had been speaking in a partial
language. Now i can tell
the names of the shadows under
the shadows. You won’t believe
the words i know
that they are words. The gate out of this world
is anywhere. i’m going to make a map
of it using all the extra
stuff. The empty bra
cup. The single leg
of hose hanging by a golden hook acting as
a limb of light. The lock spiraling
out of the empty candle tin, birthed of the naked
wick.    i now can write
a treatise on mascara; on windex; on wiping; on
ghost economy; on
hidden labor; i now can chart
directions on unsmoked
glass. i’m going to inhale. i’m going to smoke
to prove what isn’t
there. i’m going to get even
bigger
than this.

Lawrence, Kansas writer Candice Wuehle’s second full-length poetry collection is Death Industrial Complex (Notre Dame IN: Action Books, 2020), a collection constructed as a quartet of lyric suites wrapped into a portrait. Death Industrial Complex is a book about death, and our fascination with it, written out, as the back cover offers, as “a meditation on the cultural obsession with the bodies of dead women and the occult invocation of the artist Francesca Woodman.” As Wuehle responded as part of a recent interview conducted by Jordan Greene for Tarpaulin Sky (where it shortlisted for the Tarpaulin Sky Book Awards):

The poems are written from the perspective of the photographer Francesca Woodman. I started writing DIC simply because I love her work—I love that it seems to be imagining something impossible and then making that impossible thing material. Her use of light, of long exposure, of a Vaseline blurred lens and of doubled bodies all insist on time as a shaping force, but at the same time these elements complicate what time is and therefore they complicate limits. Claire Raymond says that Woodman’s work displays a “mistrust of the bourgeois contours of commemoration” and I love that. There are a lot of ways to think about personal commemoration and memory (communal, travelling, prosthetic, traumatic, historic, on and on), but there are very few ways not to. For me her images exist in a multifaceted moment that resists the restrictions of linear time and therefore is disruptive of all kinds of restrictions—cultural, sexual, narrative, spiritual. Woodman said she made her photos so she could show people the world the way she saw it; in order to do that, I think she had to do a sort of conjuring of the space that image could exist within. So her work is always right after the limit experience—it isn’t about death or even birth, but what it feels like to exist after both. It isn’t the space of the page where the writer writes, it’s the idea that there’s a page to write on. 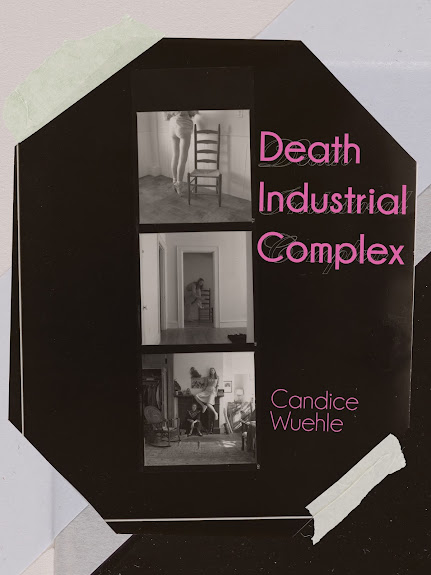 Wuehle is also the author of the forthcoming novel MONARCH (Soft Skull Press) and poetry collection FIDELITORIA: fixed or fluxed (11:11), as well as the author of the full-length debut, BOUND (Inside the Castle Press, 2018), and a handful of chapbooks through Garden-door Press, Grey Book Press and Dancing Girl Press. The first section of Death Industrial Complex, “part 0,” exists almost as prequel to the body of the collection, working up to the conversation of death and depiction: “i stand in front of a tree and i pronounce / the alphabet as one word.” she writes, to open the opening poem, “i’m trying my hand at fashion photography,” a poem that ends with the instruction “i expect you / to know i am alive. i expect you to / hold my heels as i hover.”

Wuehle utilizes Woodman as simultaneous subject, influence and jumping-off point, wrapping her gaze into and against the gaze of Woodman’s work: “tell them it isn’t a cult if it works. if later on / everyone is wearing it; tell them it isn’t a / hospital if it produces the ill; tell them i was a / charismatic economist, not a photographer; / tell them i generated the need.” (“poltergeist ii”). This seems less a collection shaped on a subject—whether Woodman or her work—than a lens through those dual subjects of artist and work. In Wuehle’s stretches of poems, text overlaps, is set upside-down, stretches across the page and even begins to blur, falling into a haze of smoke, mirrors or overexposure. Though her complex lyric suite, Wuehle sketches out a sequence of gothic narratives that tell a simultaneous story to certain of Woodman’s photographs, imagining and expanding upon what may or may not be already there. “dormitory. a girl prays over a pregnancy test.” she writes, to open the poem “on becoming an angel ii”: “she needs to know if there is anyone inside / her as bad as i need to know if there is anyone / inside me. biology is the best argument for / time, the most gross. hospital civility, they will / let you bleed and bleed as long as what you are / bleeding looks like blood.”