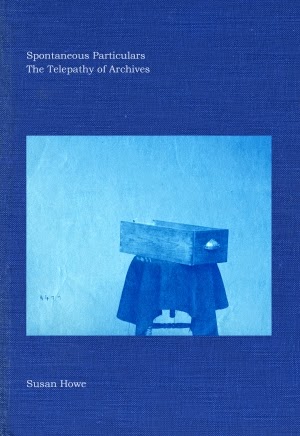 I continue to be amazed by how American poet Susan Howe constructs her poem-essays as long, complex, singular thoughts, such as in her newest title, Spontaneous Particulars: The Telepathy ofArchives (Christine Burgin Books/New Directions Books, 2014). Approaching the work from the direction of the poem, her essay weaves through a series of patterns, stitching together ideas of the archive, considerations of the sentence, and how poetry itself can be fashioned into a form most appropriate for its purposes. It is as though she attempts to explore the poem through an essay disguised as a poem disguised as an essay, an exploration similar in many ways to the current explorations Ottawa poet Brecken Hancock has been engaged in via non-fiction on ideas of confession, and utilizing one’s own story. Howe’s work has long favoured the archive, using historical documents, literary fragments, family story and mementos, and a deep curiosity to thread together wayward considerations into a single, unbreakable strand.

Poetry has no proof nor plan nor evidence by decree or in any other way. From somewhere in the twilight realm of sound a spirit of belief flares up at the point where meaning stops and the unreality of what seems most real floods over us. The inward ardor I feel while working in research libraries is intuitive. It’s a sense of self-identification and trust, or the granting of grace in an ordinary room, in a secular time.