Commune Editions began with friendships formed in struggle, with the antagonisms that define the last five years of the San Francisco Bay Area: the occupations formed in resistance to University of California tuition hikes in 2009-2011, the anti-police uprisings after the shooting of Oscar Grant that continued with the deaths of Mike Brown and Eric Garner, and the local version of Occupy, referred to by some as the Oakland Commune. All of these antagonisms have been poet-heavy in the Bay Area. And they are producing their own poetries, ones full of ruptures, strange beauties—and also strangenesses, defined by explicit politics, the ones shaped by anarchist and communist organizing, theorizing, and struggle. This work inspires. And poets Juliana Spahr, Joshua Clover, and Jasper Bernes formed Commune Editions to publish anticapitalist poetries and poetics. And to also put this work in dialogue with poetries from other countries and from other historical moments, times and places where the politicization of poetry and the participation of poets in uprisings large and small was the conversation.

We want to avoid self-important claims about poetry changing the world. Poetry is no replacement for forms of action: strikes, blockades, occupations, protests, as well as the meetings, houses, libraries, and sharing of resources that enable them. But poetry can be a companion to these activities. Like the “riot dogs” of Athens, it can accompany the movements of the streets, provide support and pleasure, loud barking too. 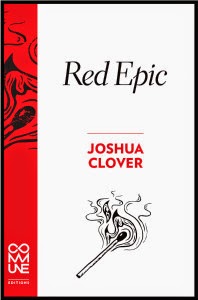 Through such a declaration, Clover’s Red Epic, even before one begins, connects to an intriguing collection of writers, publications and activities, whether Stephen Collis and Christine Leclerc as part of Enridge Pipeline activism, capitalist critiques by poets such as Jeff Derksen, donato mancini, Roy Miki and Clint Burnham, a variety of Aboriginal issues explored through works by Jordan Abel, Marie AnnHarte Baker, Shane Rhodes and Liz Howard, or even the explorations into Vancouver’s missing and murdered women by writers such as Sachiko Murakami, Shannon Stewart and Anne Stone (I know there are far more examples for all than what I have mentioned). Poetry-as-activism has a rich history, and it is good to see contemporary writers pushing to explore further what might be possible, especially in the place where poetry and activism might intersect. As he writes to open the poem “Apology”:

Oh capital let’s kiss and make up
And I’ll take back all those terrible things I said about you
To my friends in poems.

Or elsewhere, as he ends the poem “Fab, Beta, Equity Vol”:

Red Epic covers issues surrounding the global economic crises, political upheavals both current and historical, the Occupy movement and a series of barricades, by turns infused with both wreckage and hope as he spins a “Top 40 soundtrack full of Robyn and MIA.” The author of two previous poetry collections—The Totality for Kids (University of California Press, 2006), and Madonna anno domini (Louisiana State University Press, 1997), which was chosen by Jorie Graham to receive the 1996 Walt Whitman Award—there is a rush and a push to Clover’s lines, from breathless prose to poems constructed from a series of staggered phrases to the compact lyric. His cultural and critical theory background allows his poetry to articulate a series of critiques against capitalism, equity and equality, pop culture and labour, utilizing all as material in which he is able to craft poems constructed to question, argue and pry open conversation. As he writes in the opening poem, “My Life in the New Millennium,” “Once fire is the form of the spectacle the problem / becomes how to set fire to fire.”

(We lived in a cloud of recklessness)