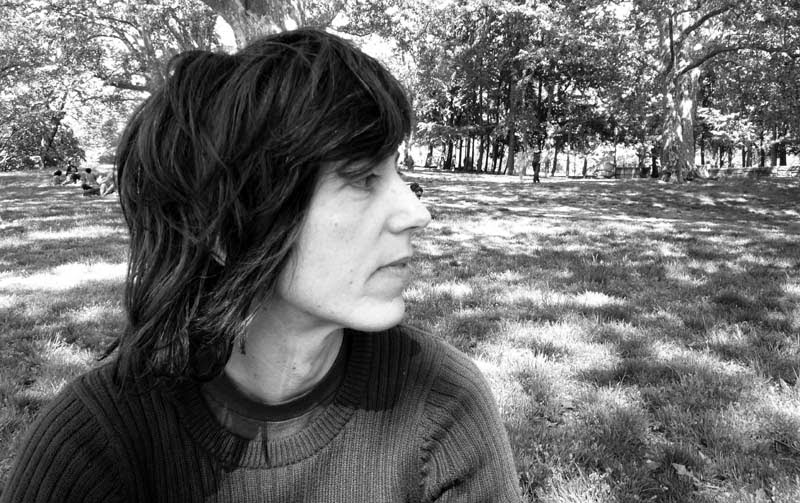 Gregoire Pam Dick (aka Mina Pam Dick, Jake Pam Dick et al.) is the author of METAPHYSICAL LICKS (BookThug, 2014) and DELINQUENT (Futurepoem, 2009). Her writing has appeared in BOMB, frieze, The Brooklyn Rail, Aufgabe, EOAGH, Fence, Matrix, Open Letter, and Postmodern Culture; it is included in the anthologies THE SONNETS (ed. S. Cohen and P. Legault, Nightboat Books, 2012) and TROUBLING THE LINE: TRANS AND GENDERQUEER POETRY AND POETICS (ed. TC Tolbert and Tim Trace Peterson, Nightboat Books, 2013). Her philosophical work has appeared in a collection published by the International Wittgenstein Symposium. Also an artist and translator, Dick lives in New York City, where she is currently doing work that makes out and off with Büchner, Wedekind, Walser, and Michaux.

1 - How did your first book change your life? How does your most recent work compare to your previous? How does it feel different?
Regarding my first published book, the main change was getting my work out of my hermit's cell and into the world, where others could read it. That lead to friendships with writers, as well as a public role, a way to contribute. In terms of poetics, it made my tendency to start and abandon long works into a method, since the first book is largely a sequence of such starts. My recent work goes deeper into each thought/tone/language world; the starts are sustained, though with formal variety. The new work is also multilingual; before, it was intertextual but in English.

2 - How did you come to poetry first, as opposed to, say, fiction or non-fiction?
I didn't come to poetry first; I came to it from writing experimental fiction with short, numbered paragraphs, philosophical reflections, shattered narratives, intertextuality and a focus on sonic, rhythmic and multivalent aspects of language. The move into prose poetry and hybrids of fiction, philosophy and poetry was natural. I like writing that rebels against or plays with distinctions.

3 - How long does it take to start any particular writing project? Does your writing initially come quickly, or is it a slow process? Do first drafts appear looking close to their final shape, or does your work come out of copious notes?
Usually I start my projects, begin writing and reading, as soon as I get the idea. Then I develop the concept of the project in the process of writing it. The initial writing comes very quickly, and first drafts are often pretty close to final versions, although there's cutting. There's also a large mass of notes running alongside; since I think by writing, everything has to be scrawled. Books with complicated structures and varied forms/contents require more revision. But there's a life in the activity of writing which I respect and try not to ruin. For me, writing is a type of (private) improvisational performance. So I treat the act of revision with care and sometimes suspicion.

4 - Where does a poem or work of prose usually begin for you? Are you an author of short pieces that end up combining into a larger project, or are you working on a "book" from the very beginning?
Aside from my first published book, my books are all books from the start. But since the first book's pieces were mostly abandoned starts of other books, even there, in each piece, I was thinking in terms of the book form.

5 - Are public readings part of or counter to your creative process? Are you the sort of writer who enjoys doing readings?
It has turned out that I really like reading. It's another form of acting (as is writing for me), and obviously it animates the work and lets it animate a body. But public reading doesn't inform or enter the process of writing. If anything, I think more about the words printed on the page, words as tiny ink drawings. The tactile and visual aspects of writing get me excited. So does sound, but in the words themselves, not as a public performance. The public aspect comes into focus later.

6 - Do you have any theoretical concerns behind your writing? What kinds of questions are you trying to answer with your work? What do you even think the current questions are?
I like to wrestle with questions rather than to answer them. I'm interested in philosophical issues of truth, meaning, ontology, the I and the world, subjectivity, mind and body, time, and in spiritual questions of how to live, how to be with others or alone, how to relate to or conceive of some sort of god even if you don't quite believe in god. I try to fuse the conceptual and the lyrical, expression and artifice, narrative and instant. Right now I'm focused on ideas of oscillation or alternation, what I've called elsewhere translit (trans in a variety of senses), and a type of incest poetics that amounts to making out and off with sibling texts. I like to play and mess around with gender. I like to write rebellious girl or girlboy characters. And I'm exploring the individual, the first person singular, with all the tensions and paradoxes it brings.

7 – What do you see the current role of the writer being in larger culture? Does s/he even have one? What do you think the role of the writer should be?
There are many roles; I would never presume to dictate one. For myself, the task is to make something that is alive and deep and questioning, something that feels urgent to me and might perhaps affect or move someone else—ideally, make them feel alive and critically thoughtful as well. This could be through intensity of reflection, of feeling, of form, of content. Again, the idea of an electrifying struggle is key here. A struggle that both is and might increase freedom.

8 - Do you find the process of working with an outside editor difficult or essential (or both)?
Sometimes it has been great, sometimes difficult or frustrating. I haven't done it very much.

9 - What is the best piece of advice you've heard (not necessarily given to you directly)?
"Stay alive," from a stunning Nicole Brossard poem.

10 - How easy has it been for you to move between genres (poetry to fiction), even within the space of a single project? What do you see as the appeal?
See the answer to 2, above. I think their different forms, grammars, musics and languages invent/allow for different modes of thought, feeling, being. And the movement between them can spark new, wild modes. I find that freedom inspiring, intoxicating. So all my work is trans-genre.

11 - What kind of writing routine do you tend to keep, or do you even have one? How does a typical day (for you) begin?
I write first thing, break at midday, write in the mid-afternoon to evening. I like having a routine.

12 - When your writing gets stalled, where do you turn or return for (for lack of a better word) inspiration?
I turn to other books; invariably that gets me excited. Or I walk through the city, get blown away by what I see. Sometimes I catch an art exhibition or a film, or I listen to music. Since I work on several projects at once, I can also switch focus from the stalled project to a different one.

13 - What fragrance reminds you of home?
Coffee.

14 - David W. McFadden once said that books come from books, but are there any other forms that influence your work, whether nature, music, science or visual art?
I am very engaged with musical aspects of writing (repetition, variation, dynamics, timbre, tonality and dissonance, rhythm, speed shifts, overall structure, etc.). Painting is also an influence. The city offers forms, in a type of urban phenomenology. Philosophy always comes into play—its forms as well as its content. And comic books flap in.

16 - What would you like to do that you haven't yet done?
I'd like to use more of my visual art in my work—to make something that has an explicit, sustained visual aspect as well as the verbal one.

17 - If you could pick any other occupation to attempt, what would it be? Or, alternately, what do you think you would have ended up doing had you not been a writer?
I would have ended up being a professional artist or philosopher, but sometimes I fantasize about being a mathematician. I would have loved (I imagine) to be a composer. Or a hermit monk/mystic/scribe/manuscript illuminator. I think I would have liked to be Paul Klee.

18 - What made you write, as opposed to doing something else?
Some inner necessity. I started writing very early, then ended up pursuing art and philosophy. But finally, I felt that writing was calling to me (in a purely personal way), demanding that I do it.

20 - What are you currently working on?
Several prose-poem novels that engage with the work of Michaux, Wittgenstein, Walser and Kafka, among others, while also taking up some questions in Anglo-American analytic philosophy.