I hear myself whispering to the wood, at night, on hilltops. I hear myself whispering at night in my sleep. What are my eyelids saying. At night the room fluctuates. Climbs other rooms, other landscapes. I am steaming in this room while the other room heaves forward. Embeds itself in the coat rack and the doorframe, seeps in between pages of a book. Later I find traces of it. A residue on the countertop, a piece of bark in the sink drain. The impression of an ear on the wall. I have the distinct sense that the room is listening. The room is carving out new ideas beneath the skin. The pores soak in their salt, sweat out the room, move the room upward into the light. Let the room sink like a stone cradled inside the ear. The stone will absorb the room, not necessarily bring the room. Some people live on borrowed rooms and their eyes are shakier for it. It is best to dissolve a room like this, to walk away from it and not turn back to check its progress. (“Séance”)

I’m fascinated by the essay-poems that make up Andrea Rexilius’ third poetry collection, New Organism: Essais (Tuscon AZ: Letter Machine Editions, 2014), a title that follows To Be Human Is To Be A Conversation (Rescue Press, 2011) and Half of What They Carried Flew Away (Letter Machine, 2012). As part of her accompanying statement in The Volta Book of Poets (Sidebrow Books, 2015), she writes: 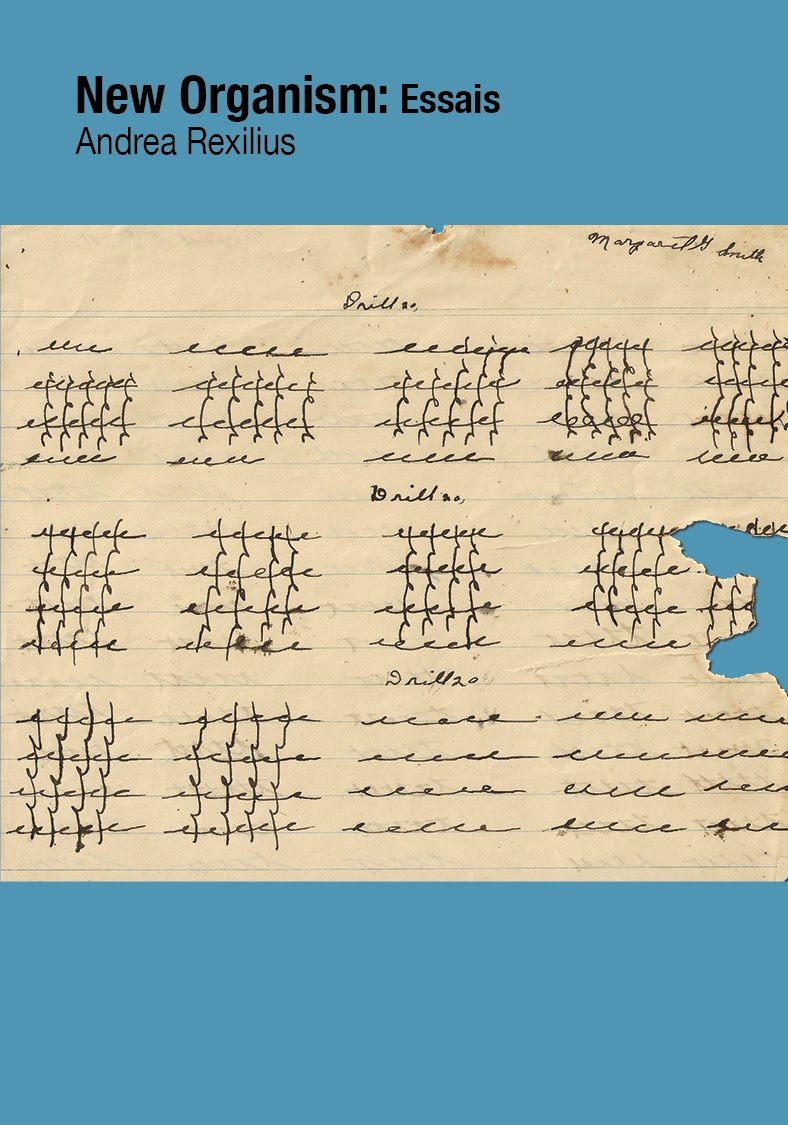 There have been numerous poets over the years exploring the blend between essay and poem (with a shortlist of Canadian poets who immediately come to mind: PhilHall, Barry McKinnon and Erín Moure), and Rexilius’ explorations into the same exist deep in the tradition of the extended prose poem. New Organism: Essais exists both as a new collection of poems by Andrea Rexilius, and an argument of the forms in which she works, exploring, prodding and pushing at the boundaries between multliple genres, existing simultaneously within each work. There is something remarkable in the way that Rexilius explores the boundaries of the book as unit of composition, and one that is entirely unique in the realm of poetry-as-thinking, and the possibilities of the extended prose poem. Each poem within the book speaks to, and is intimately connected to, each surrounding poem, and the book as a whole exists as a thesis on thinking, collecting and states of being. In the sequence “Second Residue: The Woods,” she writes: “A territory is not a blank page. / It is the book buried beneath the ground.” The book exists in two sections: “New Organism,” made up of five sections of extended prose poems, and “Essais,” made up of two extended prose poem-essays. The tricky part is attempting to explain the differences, as her blend of poem and essay run throughout, yet one might say that the first part of the collection leans more towards the poem, as the second part leans toward the formal essay. And yet, in the end, to speculate on the differences between the two might be to miss the point entirely.

The animal that is my sex is not a novel. This is a novel. This caused a rhizomatic membrane. I am faltering here. In the white snow of the white page. Yesterday I watched a Tarkovsky film in Russian. The translation was “look how peculiar the sky. The sky.” I meandered back inside the doorway just as it began to pour. All of the grain in the field writhing. I struck the yellow leaves with my fist. I struck the grey sky and the mud beneath my feet. I don’t know what being human means. Is it to have eyes? Here is the ground, the field. The air around me a room. A room that pulses and heaves. The light, clear. The light, not yellow. My breath, not yellow or clear. The words, leaves upon my breath. the turning of the seasons fall off of my mouth. My mouth lingers. The sun sets. Some animal burrows its dark fur inside this sentence.

If Lisa Robertson is, as she once wrote, “a gentleman collector of sentences,” then Rexilius is the bricolage, and the first of her two essays in the “Essais” section, “Root Systems of Narrative: A Séance,” describes exactly the same process Stan Dragland does in his new book of essays, The Bricoleur & His Sentences (Pedlar Press, 2014). As Canadian poets Robertson, Phil Hall and Natalie Simpson, Rexilius is a serious collector, and, in similar ways, her writing is the result of a complex collage of a myriad of materials, picked up from a scattering of sources, precisely set in very deliberate ways. As she writes in “Root Systems of Narrative: A Séance”:

I tend to gather alike things in language. I obsess over an idea or a term or an image and use it over and over again in a variety of contexts. Images are cumulative or regenerative. They have to be allowed to exist in almost every context before we can pretend to know anything about them. I find I have to use my body in order to write well. I go for a walk first and gather things and pretend to be a diorama. Then word conduct themselves. If I don’t go for a walk first, I gather things from books. I move through books the same way I move through walks. I turn to pages and find the field jar. Then I put all of the field jar elements onto a page. Then I cut and paste them. I have to trust my first instinct or there is a massacre. I have tried many times to undo a massacre. Everyone knows things are hacked up and put back together when that happens. They sense a murder has occurred and are uncomfortable.