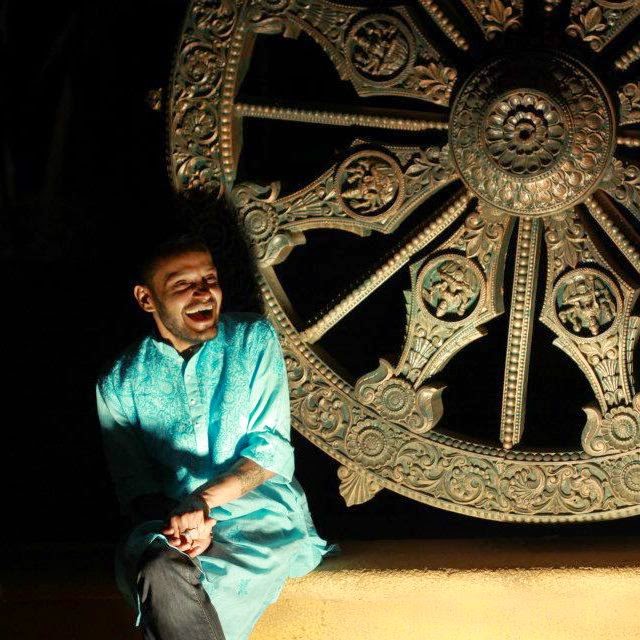 Biswamit Dwibedy [photo credit: Ashwini A Singh] is the author of Ozalid (1913 Press, 2010), and Hubble Gardener and Erode, both forthcoming from 1913 Press. He was born in Orissa, India, and lives in Bangalore. He has a Master of Fine Arts in Creative Writing from Bard College, New York. He's also a visual artist and translator, and recently edited a collection of contemporary poetry in translation from seven Indian languages for Litmus Press’s Aufgabe # 13. In India, he works for Ogilvy and Mather, and is the founder and editor of Annew Press, a small, independent publishing effort focusing on translations, reissues and new voices in contemporary poetry from India and abroad.

1 - How did your first book change your life? How does your most recent work compare to your previous? How does it feel different?
1913 Press published my book Ozalid shortly after I’d just moved to India—my life had just changed somewhat drastically and the book was as if a souvenir of the time I’d spent in America, a reminder of this other life I had just given up. It was life-changing because I’d just never thought I’d publish a book of poetry that would look like that—the Dollars did a wonderful job. The shapes of my poems surprised me, though it was my own work. I think I find less of that element of surprise when it comes to formal experiments in my poetry now. Though I am branching out into me forms, things were less familiar then and I didn’t know I was writing a book. I had nothing to say and I wanted nothing. That’s not the case now, I guess. My most recent work also feels drastically different especially because I am writing from within India now; I am home, but I don’t know really know who my audience is. But of course for that one person you write for.

2 - How did you come to poetry first, as opposed to, say, fiction or non-fiction?
Through the women poets whose work I fell in love with Leslie Scalapino’s Defoe, Considering How Exaggerated Music is, everything by Cole Swensen, Rosmarie Waldrop, Lyn Hejinian’s My Life, Barbara Guest’s Seeking Air. All of them question genre, form, and work with others modes of thinking. I love Fanny Howe’s Radical Love, I can never tell if it is poetry or some new religion. So I guess I came to poetry in a way that included prose as well; I came to it precisely because I saw it as a place where disparate things could co-exist.

3 - How long does it take to start any particular writing project? Does your writing initially come quickly, or is it a slow process? Do first drafts appear looking close to their final shape, or does your work come out of copious notes?
There was a time when many writing projects sparked up one after the others, ideas I am working on slowly, each its own book, it’s kind of sad and very unorganized of me. And together they make any sort of progress very slow. I don’t know yet what they will look like finally, but yes, they do come out of lots on notes, reading and research, at least the last two books did. It is a process of I slowly sculpting out the shape of a poem or a book from a sea of fluid matter.

4 - Where does a poem usually begin for you? Are you an author of short pieces that end up combining into a larger project, or are you working on a "book" from the very beginning?
I have a series of seemingly unrelated poems always going on—things that I might later realize are in fact one solid train of thought I am trying to give shape to. I like the idea of the book as unit, and am occupied with a few projects recently that are thematic books, but progress is slow.

5 - Are public readings part of or counter to your creative process? Are you the sort of writer who enjoys doing readings?
They weren’t till recently, when I had to record a talk for a conference at the University of Montana, and I realized how great it was to hear myself and then edit things according. I’d always been told to do that, but I never tried it I guess. I am terrified of reading in public, but I don’t mind recording at all.

6 - Do you have any theoretical concerns behind your writing? What kinds of questions are you trying to answer with your work? What do you even think the current questions are?
Writing is a form of desire for me, a place where you maneuver what you can and cannot say. Theoretical concerns change as one moves from one book to another, slightly, maybe, but it’s always about desire, and using language to give it some form, to be in a dialogue with its double. I’m always reading Deleuze, but lately I seem to be interested in theories of religion and queer identity, and diving into ancient forms of knowledge that we know little about to create a living theory for one’s own life that might resonate with our times.

7 – What do you see the current role of the writer being in larger culture? Does s/he even have one? What do you think the role of the writer should be?
Of course the writer plays an important role in any culture; but I am more interested in the kind of role that a writer can play in my own—Indian—culture. There’s possibility of making real change in the world through one’s words here. I do sometimes believe that it is more exciting to be a writer here now because the audience dynamics is completely different. We don’t have MFA programs. We are fascinated by new ways of telling a story, social media. We might be majorly conservative about some things but we are also open to some very freaky traditions. It’s a fun mix and I think writers should take advantage of that; be more creative in their storytelling, formally, and dive into the mysteries of our fascinating culture.

8 - Do you find the process of working with an outside editor difficult or essential (or both)?
I always found it to be an amazingly helpful experience. I just recent

9 - What is the best piece of advice you've heard (not necessarily given to you directly)?
Poets never finish anything.

10 - How easy has it been for you to move between genres (poetry to critical prose)? What do you see as the appeal?
It’s a difficult transition for me, to write sentences, one after the other, but the most appealing thing about prose, or the fiction I am writing is the amount of freedom I find there to write what I want, as a story and between, in sentences. Somehow, surprisingly, it’s something I find missing in my poetry now.

11 - What kind of writing routine do you tend to keep, or do you even have one? How does a typical day (for you) begin?
It is difficult to have a routine revolving around my day-job, which requires crazy hours, so I tend to write, take notes, as and when I can, at home or at work, and then somehow collect them all later, in the night, but not daily, into a piece or poem.

12 - When your writing gets stalled, where do you turn or return for (for lack of a better word) inspiration?
Cole Swensen.

13 - What fragrance reminds you of home?
A particular brand of incense called Bharat Darshan.

14 - David W. McFadden once said that books come from books, but are there any other forms that influence your work, whether nature, music, science or visual art?
I am influenced by all of those, and history, particularly, seems to be a driving force for my work now.

15 - What other writers or writings are important for your work, or simply your life outside of your work?
The list is endless, but Deleuze and Guattari’s A Thousand Plateaus is my bible.

16 - What would you like to do that you haven't yet done?
Go on a trip abroad with a dear friend of mine.

17 - If you could pick any other occupation to attempt, what would it be? Or, alternately, what do you think you would have ended up doing had you not been a writer?
I’d love to work in a neuroscience lab. I moved to the US to study Biomedical Engineering before becoming a poet, so I guess I would have ended up somewhere along those lines, though I can’t imagine that. But yeah, neuroscience is wild fun.

18 - What made you write, as opposed to doing something else?
I don’t know, but I was copying lyrics of pop-songs and calling them my own since I was a child. That impulse, to plagiarize, to cut and paste, to play with language was always there I guess.

20 - What are you currently working on?
I am working on a book of poems that play with the idea of the vicarious. I want to sort of wash it off its serious Christian denotations and understand it as a way of life, of selflessness that is alive in everyday actions. I am also working a novel of historical fiction about the first Indian man to write a book in English. I am calling it The Hair Surgeon.