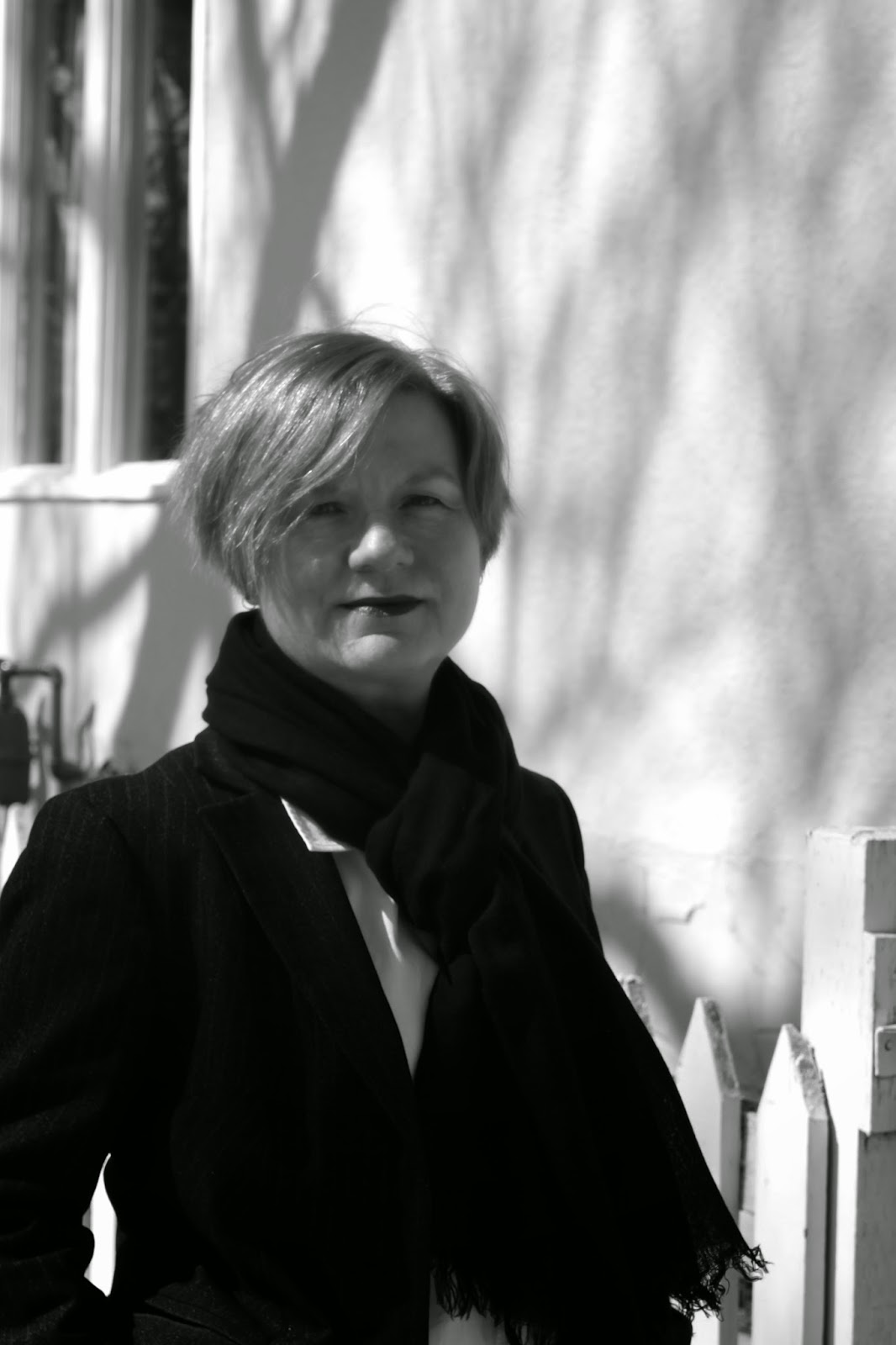 Wendy McGrath is an Edmonton-based writer whose most recent novel North East appeared in October, 2014 (NeWest Press). The poetry collection, A Revision of Forward, is forthcoming fall, 2015 (NeWest Press). A Revision of Forward is the culmination of a poem-print collaboration between McGrath and Edmonton-based printmaker Walter Jule. McGrath’s novel Santa Rosa, the prequel to North East, was published April, 2011 (NeWest Press) and was a finalist for the 2012 City of Edmonton Book Award. Her first novel, Recurring Fictions, was published June, 2002 (University of Alberta Press).

Additional poetry, fiction, and non-fiction publication and broadcast credits include: Descant, The Edmonton Journal, Prairie Fire, Grain, Contemporary Verse 2, Prism International, NeWest Review, Orbis (UK), Tessera, Room of One’s Own, as well as CBC Radio, and on Edmonton Transit buses as part of Take the Poetry Route—co-sponsored by the Canada Council and the Edmonton Arts Council.

1 - How did your first book or chapbook change your life? How does your most recent work compare to your previous? How does it feel different?
My first book was common place ecstasies, a collection of poetry. My life didn’t change—I had two young children and I was freelancing so it was still hectic. What did change, though, was my attitude toward my writing. I felt that first book gave me some credibility. North East, my most recent novel, is the sequel to Santa Rosa and the second in a trilogy. North East still has the same narrator and neighbourhood at its heart, but the narrator’s awareness is increasing and it’s more evident that she is trying to respond to the world around her in a creative and responsive way. Both works have celestial events and both have, to me at least, a very strong soundtrack. North East feels different partly because the narrator is gaining more insight into her world and because the world, in a microcosmic and a macrocosmic way, is changing.

2 - How did you come to poetry first, as opposed to, say, fiction or non-fiction?
I don’t think it was a conscious choice. It seems that my ideas and my writing seem to dictate what they should be. I’m getting better at paying attention to what is needed at a certain point in time and I don’t anguish as much as I did in terms of “I should be writing a poem, I should be working on a short story, I should work on this idea for this novel…” Now I listen to what a particular piece of writing might have to say to me.

3 - How long does it take to start any particular writing project? Does your writing initially come quickly, or is it a slow process? Do first drafts appear looking close to their final shape, or does your work come out of copious notes?
It really depends on the project. I wish every project came to me in a fully-formed idea and then simply translated to the page just as easily! Ha! There have been a couple of times when a poem has come to me in its final, true form but that is so rare. I keep journals and notebooks and jot things down, sometimes they come to something and sometimes they don’t. In terms of my novels, I worked on Recurring Fictions for about a year once I knew what I was working on! Santa Rosa I’d been working on for about seven years. I’ve been working on A Revision of Forward off-and-on with Walter Jule for 12 years now. I guess I’m learning to be patient.

4 - Where does a poem or work of fiction usually begin for you? Are you an author of short pieces that end up combining into a larger project, or are you working on a "book" from the very beginning?
Again, it really depends on the project. My first novel Recurring Fictions, began as a short story. At that point, I thought I would tackle a novel at some distant time in the future, because my children were still young.  So I worked on a short story and then another short story. One was broadcast on CBC and the other was published in Prairie Fire. I realized that the two were connected and I just started writing toward the shape of the book I envisioned in my mind. I saw a helical structure with quieter threads travelling outside that structure. Recurring Fictions was the novel I never intended to write. When I was writing Santa Rosa, though, I knew there would be three books and each one would grow from the narrator’s vision and artistic voice. A Revision of Forward is a collection of poetry (forthcoming from NeWest Press fall 2015) that began with fragments of poetry that were inspired by prints by Edmonton printmaker Walter Jule. We thought of treating the print/poem idea in a number of different ways. The idea for a book came later as Walter created more prints inspired by my poetry and my poetry was also changing. It’s an interesting project of which the “book” as artifact plays one part in the interplay between the artistic visions of printmaker and poet.

5 - Are public readings part of or counter to your creative process? Are you the sort of writer who enjoys doing readings?
I enjoy doing readings but I don’t use them as a sounding board or a testing-ground of any kind for my work.

6 - Do you have any theoretical concerns behind your writing? What kinds of questions are you trying to answer with your work? What do you even think the current questions are?
I like to poke holes in the theory of genre. Writing should make mischief--poetic fiction, a novel that could be considered a long poem. I’m still asking questions, I’m not sure I’ll ever find answers. For me, the questions are more important anyway. The most important question for me is usually: “Will I ever write anything again?”

8 - Do you find the process of working with an outside editor difficult or essential (or both)?
I’ve been fortunate to work with wonderful editors, so I haven’t found the process difficult at all. They’ve understood my vision, which was important, and they were sensitive. The edits they proposed were usually spot-on but they didn’t push if I disagreed with a suggestion. I think there needs to be give-and-take and trust. Every writer should feel lucky to have a good editor.

9 - What is the best piece of advice you've heard (not necessarily given to you directly)?
Keep writing.

10 - How easy has it been for you to move between genres (poetry to fiction)? What do you see as the appeal?
I used to worry about what I should be working on, if I were writing poetry I thought I should be working on fiction and vice versa, but I don’t anymore. I go with whatever presents itself. I do find, however, that a poem and a longer piece of fiction work different ‘muscles.’ By that I mean I feel different when I work on a poem and when I work on a piece of fiction. It is a physical thing as well as cerebral.

11 - What kind of writing routine do you tend to keep, or do you even have one? How does a typical day (for you) begin?
At the moment I have absolutely no writing routine. I wish I did! I simply try to work in writing time whenever I can. I keep notebooks. A typical day for me begins with either a run or a bike.

12 - When your writing gets stalled, where do you turn or return for (for lack of a better word) inspiration?
I sometimes gather props and have them near me when I write. So when I was working on a particular part of North East, I bought a vintage hat, and for a part of Santa Rosa I bought Brylcreem and a certain type of shaving cream. I also have colours that I think about. When I was working on Santa Rosa I got paint swatches from the hardware store and pinned those to the wall. I also pinned those first “A Revision of Forward” prints Walter Jule created to my dining room wall, so I could live with them and let the poems naturally evolve out of these first ethereal images.

13 - What fragrance reminds you of home?
Saskatchewan—the pines, the lake, the smell of earth after a rain, old wood, wet wool…

14 - David W. McFadden once said that books come from books, but are there any other forms that influence your work, whether nature, music, science or visual art?
Music, art and nature strongly influence my work. I listened to songs about trains when I was writing Recurring Fictions and the rhythm of a train on the tracks is one of the threads that hold the narrative together. I have written poems based on the work of Vincent van Gogh and, of course, Walter Jule’s prints were the influence for the long poem “A Revision of Forward” in the eponymous upcoming collection. Music also informs Santa Rosa and North East. Each book has a different soundtrack.

15 - What other writers or writings are important for your work, or simply your life outside of your work?
Robert Kroetsch has influenced my poetry. My long poem “preserving” was inspired by Seed Catalogue. bp nichol’s sense of joy and his playfulness has been a tremendous inspiration.  James Joyce’s Dubliners is talismanic--“The Dead” in particular. Michael Ondaatje is also a hero of mine, for his fiction and poetry. Virginia Woolf’s work has probably most influenced my fiction.

16 - What would you like to do that you haven't yet done?
Go to the Glastonbury music festival, visit Stonehenge on summer solstice, babysit turtle eggs…I’ve also never water-skied. I need to learn to water-ski.

17 - If you could pick any other occupation to attempt, what would it be? Or, alternately, what do you think you would have ended up doing had you not been a writer?
I was a ham when I was a kid, I loved to dance, and sing. I loved being on stage. I probably would have been an actor, dancer or a singer.

18 - What made you write, as opposed to doing something else?
I have also experimented with visual art—drawing, printmaking—but one life only gives you so much time. I’ve always loved words and I’ve always loved story. Before I even knew how to print I was trying to put stories down on paper. I think I felt compelled to write above anything else I might have tried. I always came back to writing.

20 - What are you currently working on?
I am working on the sequel to North East, the final book in the Santa Rosa trilogy. I have also begun researching another book.