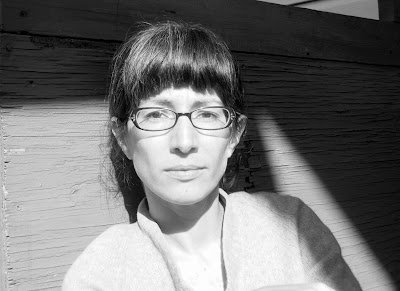 Basma Kavanagh is a Nova Scotia visual artist and poet. She has lived and worked on Canada's east and west coasts and has recently landed in the middle. Her chapbook A Rattle of Leaves was published by Red Dragonfly Press, Minnesota, and her first full length poetry collection Distillō was published by Gaspereau Press.

1 - How did your first book change your life? How does your most recent work compare to your previous? How does it feel different?
My first book made me feel less certain about what I'm doing and more vulnerable, since it froze the work and made it public, too. And yet, a book is a stone dropped into the pond-perhaps there will be a ripple, perhaps it is solid enough to stand on. My recent work feels more dense, which, if writing poetry can be considered a game of "Hot & Cold", is warm.warmer.

2 - How did you come to poetry first, as opposed to, say, fiction or non-fiction?
It was poetry that most closely resembled the conversation I was having with the world around me, the sounds the world was making, which had rhythm like walking or swinging or swimming. Fiction had more to do with school and reading-it seemed separate, fixed; poetry was everything else, and more mutable. I've always been a voracious reader of non-fiction, but it didn't occur to me that I might write some until very recently.

3 - How long does it take to start any particular writing project? Does your writing initially come quickly, or is it a slow process? Do first drafts appear looking close to their final shape, or does your work come out of copious notes?
I tend to work around ideas, inhabiting a thematic region, so I do my research and take notes (sketch, photograph), and the work just kind of bubbles up through that place I've prepared for it. Some lucky pieces emerge much resembling their final forms. Starting a project is easy (choose something from the fertile muck) but finishing can take a long time, and frequently the final thing has undergone a lot of mutation. I don't necessarily end up with what I expected.

4 - Where does a poem usually begin for you? Are you an author of short pieces that end up combining into a larger project, or are you working on a "book" from the very beginning?
I like to work thematically, investigating inexhaustible subjects or ideas, whether I am writing or painting or printing. I work from a vision or sense of the whole and sort of blunder towards and around that until, at a certain point, what precisely I am doing comes into sharper focus. So, yes, I am usually working on a book from the very beginning. Individual poems, however, are often sparked by a particular event-some vivid occurrence that binds the research, the astonished bumbling, and the anxious dreams together.

5 - Are public readings part of or counter to your creative process? Are you the sort of writer who enjoys doing readings?
I find readings terrifying, but they are also magical, valuable. The reading is the opportunity to be in the same room with readers, to experience and deliver the poems with their intended musicality, the elements of breath and voice and emotional atmosphere combining to create something that is at once more vital-yet more ephemeral- than the thing that exists on the page. I don't know that readings could really be considered as part of my creative process, but I write every poem to be read out loud, to be heard. Without the opportunity to share the voiced work, something essential would be missing from the life of the poems.

6 - Do you have any theoretical concerns behind your writing? What kinds of questions are you trying to answer with your work? What do you even think the current questions are?
That's a tricky one. I am absorbed by questions of place, ecology, 'nature', perception, but I am reluctant to cage them with too much critical framework. I like to let my process, my questions remain mysterious, revelatory. I read, I listen, I watch, I dream and then I work with what drifts to the surface.

7 - What do you see the current role of the writer being in larger culture? Does s/he even have one? What do you think the role of the writer should be?
Increasingly, I think of writers (poets especially) as protecting something sacred, while engaged in a continually renewed process of discovering and defining what is sacred and what needs protection in our bodies, our world, our spoken and written languages. I think the writer's role should be that vital and formative, and by extension, less self-referential, less tied to the academy.

8 - Do you find the process of working with an outside editor difficult or essential (or both)?
Yes, both, but it is also illuminating, because we can never quite be sure (from the inside) how something will be read, and a careful, insightful reader can draw the writer's attention to what needs to be refined or clarified.

9 - What is the best piece of advice you've heard (not necessarily given to you directly)?
"Do the best you can, with what you have, from where you are right now." This was a Cape Breton Post 'Quote of the Day' several years ago. Typically, I can't remember who it was attributed to, but I have found it to be a useful mantra, helping me to cut through the excuses and despair that otherwise immobilize me.

10 - How easy has it been for you to move between genres (poetry to painting to printmaking)? What do you see as the appeal?
I think of the various media as languages. I may be less fluent in one or another, but having a working knowledge of several allows me turn to a particular medium with a sense that the precise word or phrase or texture I need is there. This is not necessarily easy, but over time, organically, I've found that these fluencies enrich and interact with one another, forming unexpected ligatures, or hybrid senses. The world is transformed; there is no choice but to keep moving, there is nowhere to be except "between".

11 - What kind of writing routine do you tend to keep, or do you even have one? How does a typical day (for you) begin?
I prefer to write in the morning and, when possible, that is what I do. I like to start with a strong black coffee that I top up and top up with hot water until it is, as Ani DiFranco sang, "water dressed in brown"-this usually takes until lunch time. The rest of the time, I carry a notebook with me for writing in situ, or while walking. I also find I need a lot of staring into space:  looking out the window or "working" in the garden are essential parts of my writing practice.

12 - When your writing gets stalled, where do you turn or return for (for lack of a better word) inspiration?
Usually just going somewhere quiet without a lot of people or cars replenishes my aquifers, but these last few years of intensive work have really drained me. I am still trying to figure out what I need to do to recharge. Being stalled for me isn't really about running out of ideas, more about running out of the energy required to bring them into the world. Doubling my body weight and sleeping in the ground for six months might work.

13 - What fragrance reminds you of home?
Three potent fragrances come to mind: the smell of the Atlantic Ocean, an onion frying, za'atar. But I may be confusing "home" with "childhood".

14 - David W. McFadden once said that books come from books, but are there any other forms that influence your work, whether nature, music, science or visual art?
All those things influence my work, all those translations and interpretations of the living world. Often though, I simply return to the source-the primary experiences of the senses.

15 - What other writers or writings are important for your work, or simply your life outside of your work?
For my work, I love to consult old herbals, enthnographies and ethnobotanical writings, traditional stories, biological or scientific texts and research. Works like Dale Pendell's Pharmako/poeia, Alice Oswald's Dart and George Eliot Clarke's Whylah Falls seem to tap into the ether directly, and leave me feeling both optimistic and envious. Outside my work, I like to read novelists like Sarah Waters, Margaret Atwood, Neal Stephenson, Guy Vanderhaeghe, Philip K. Dick (and many more) for the bliss of inhabiting a good yarn.

17 - If you could pick any other occupation to attempt, what would it be? Or, alternately, what do you think you would have ended up doing had you not been a writer?
I think I would like to become an auto mechanic and work on classic cars. I would also be pretty content to grow food for people, something I may yet fall back on.

18 - What made you write, as opposed to doing something else?
I think reading made me write. But not in opposition to something else... in fact, reading has made me do a great variety of things. I blame literacy.

20 - What are you currently working on?
I'm working on a swamp fugue, an artist's book about an annelid, a series of soft sculptures inspired by fungi, & lunch.