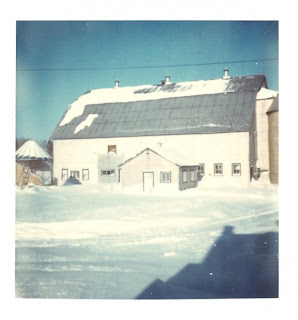 When Crusoe landed on his island after the shipwreck, he was not yet Robinson. He would be Robinson from the moment that, finding neither pen nor pencil in the jetsam, he liberated a cutter and some books. from these found objects would be born the method that names him.

The real knowledge of weather is indigenous.


Lisa Robertson, “The Weather: A Report on Sincerity,” The Chicago Review

I sometimes talk about my home, my point-of-origin, as though it isn’t there anymore. Less than an hour’s drive from where I’m sitting. The red-bricked house still stands, my parents live where they have always lived. On Saturdays, he still claims riding mower from the shed to cut the lawn around the house, up both sides of the laneway. Can you ever go home again? Why would you wish to? I don’t want to regress to some sentimental or imagined security from my nineteenth year, the summer I finally left; I want to be as I am, visiting that place I used to live, despite knowing that imaginary photo-still less intact with every visit. One has to reconcile differences, and the results of time’s inevitable passage. My parents enter their seventh decades and the barn abandoned now more than a dozen years. He uses the bulk of it as storage, the former milkhouse become a woodworking shop. The barnyard barren, overgrown. Whether I am home or not, an anchor, there. To live at all, one must get used to loss. One must also acknowledge gains.

I compare the current state of the barn to a corpse, a dead thing. What once a living, thriving creature. Empty of livestock, feral cats, component parts of milking equipment salvaged, sold. What’s left of the structure slowly rotting, more than a century old. The hewn beams in the haymow suggest it rebuilt from a previous structure, one we never knew.

My former partner in Toronto didn’t fully comprehend the weight, the security such connections bring; I’m not sure my late mother did, either, with her list of childhood residences including years in Brockville, Kemptville, Ottawa. My father, the same house since a year old, born across the dirt road in the little house my sister shares with husband, three kids; a log house said to be older than Dominion. The farm next door, where my grandfather, great-grandfather born as well, home as well to two generations further, going back on this stretch of Macdonald’s Grove to 1845. This, I know, remains.

Ralph Connor, penname of the Rev. Charles Gordon, considered Canada’s best-selling author at the turn of the century. Highly moral novels about the Glengarry Scots of the upper Ottawa Valley, when Gaelic probably still first language. Generations of McLennans raised in the church his father built, late 18th century red steeple held the morals of a community, dour Protestantism, with that silent, Calvinist streak. As Connor himself wrote in Postscript to Adventure, The Autobiography of Ralph Connor (1938): “Our Glengarry folk, as I have said, were mostly from the Highlands and Islands of Scotland. They were sturdy, industrious, patient, courageous.” How important his books were as an example, to realize it was possible to be from here, and write. Perhaps not temporally local but geographically, to realize there was such a thing as serious art amid this wooded glen where history preferred. The little one-room schoolhouse now at Upper Canada Village, where paternal grandmother studied, some four decades after Connor. Only later, my late teens into my early twenties, aware of the work of Dorothy Dumbrille, Don McKay. Gary Geddes, Henry Beissel, Stephen Brockwell. Glengarry books, and even authors.

Through the space of my lifetime, the Canadian population has gone from being predominantly rural to predominantly urban. Russell Smith’s deliberately urban novels, exploring a real space currently lived. I grew up on a dairy farm, five miles from a village. At the University of Alberta, an MA student who didn’t realize that writers also originated from farms, thought Canadian rural was an arbitrary literary construct. You have got to be kidding me. There are those of us still from farm country composing literary books, our individual poems. Karen Solie, Robert Kroetsch, Phil Hall, Sheri Benning, Dennis Cooley. The poets from small towns: Andy Weaver, Adam Dickinson, Don McKay, Monty Reid. I came from a long line of farmers. Is it really so rare? How many literary writers of my generation can say the same? How can that not impact upon my relationship with space itself, a relationship with the land? So different from the suburban spaces of Sheila Heti, Michael Holmes, Anne Stone, David McGimpsey or Jon Paul Fiorentino. Barbara Gowdy.

Pastoral. Don McKay talks about it, Lisa Robertson references it. More than just the weather. There have even been a few anthologies. What has this to do with writing? Not arbitrary and artificially writing about the natural world, but simply being aware of spaces. Listen.

What happens outside can’t help but impact upon our immediate. The corn won’t be ready for another few days. If it rains, we can’t cut the hay today. Wait for the sun to dry bales in the field. Wet bales of hay or straw in the haymow, wet heat trapped without air begins to boil, burst into flame. This is how you lose the barn, the entire herd of milking cows. How you can smell the rain in the air for miles, anticipate it through the way the wind blows through the leaves. A sudden drop in temperature, and pressure. My father, who knows the names of trees, the birds, the long wild grasses. Less deliberate than birding. More.

How we talk about the weather. How these natural systems directly impact how a growing season unfolds, and how the year does. All the way to the bank. Just how much you need to understand the earth, the weather, the way the wind blows, to be able to make any kind of living. It is a question of survival. The immediate becomes a seasonal cycle, more important than school, than birthdays, anniversaries. We mark our days by cycles of planting, harvest. Spring, when the soil dry enough to till, a whole new crop of stones to pick, and overflow front end loader, decorate fenceline. To harvest these before a proper till, before the corn was planted. Not stone hammer or stone maul but simple stone, scraped up by scar of plow.

Instead of recess, played my scales. Another lesson. A further step from bonding with peers, already shy, removed. Out on the farm, with barely a neighbour my age. Thirteen years of lessons, told to practice instead of wasting, wandering time. I wasted time. I put my head down. Played. I suppose, then, this was discipline. Certain things were put aside.

I absorbed books, consumed them. Wrote poems, small stories, painted pictures, drew, took photographs. Self-taught guitar. Studied the shadows of clouds as they eased their slow way across hayfields, after the second summer cut. The dust cloud of mail delivery down dirt road, giving something to do. Walk up the lane to harvest weekday mail and daily paper, dog running circles around. The days that once the mail had come, there was usually nothing else external that could interfere. Much the way I still live.

Solitary exploration, a matter of course. So many times, the dog in tow. Exploring the trails through the bush beside what now my sister’s house, once where my grandmother widowed, some fifteen years alone. The trail that opened up a mouth and mossy mound rose feet away the rotting decades of my grandfather’s maple sugar shack. To the left, far further down, the sandpit where we once dumped our early 1970s garbage. The sand, the garbage, long removed, the trail grown over. Other threads and other paths since opened, built. All wide enough to roll a tractor, dual ruts, hauling once-wood for the basement furnace. The unknown corners where he set late family pets to rest, unrecorded cats and dogs. Not met with oblivion but return; they are there, still.

The world outside the house a language that requires itself to be understood, if one is to depend on such for livelihood, direction. Inside the farmhouse, another sort of language existed, constructed out of singular, similar silences. Codes not taught or explained, and often defied comprehension. Learning another language by rote, by trial-and-error. We would not speak, thus.

Poet Phil Hall speaks of tokens, essential remnants, markers. The heart of history engages and emerges from our objects, often. A washboard from cobwebbed basement, my grandfather’s ancient film camera, his shaving travel case I carry. Who we are and where we’re from a thing constantly renegotiated, something carried within, no matter where we might end up. Foundations rarely change, no matter subsequent constructions.

My apartment is littered. Tokens, large and small. Hall’s fill up the barn behind his Perth-area cottage. What do these magpie tendencies, these impulses, mean? Where do they take us? Or do they stabilize. Not hold back, nor hold in place. Foundations.

Is it possible to be pastoral in a city? Does a city provide, not an automatic relationship with the land but with ideas? When you pave the bare earth over, does your relationship become distant, distracted, even artificial? Not so, I know. Still. Hot sun bounces off concrete back up, resonates further heat. Is not absorbed into the still-cool earth. In a big city, under a tree in the shadiest part of cool, of park.

The predominant work of my twenties, learning to read the language of cities. The rumble of OC Transpo bus around the corner, felt before seen. Navigating sidesteps from the breath of exhaust, a patch of water splashed from passing cars. Identify the direction of smoke before the strawberry lights and wail of sirens locate. The reduced ice build-up on the north sidewalks of Centretown east-west streets that winter sun provides, the shade of cooler south for summer. The patterns of traffic lights.

Attention, even before any conversation concerning wilderness as subject. A city pastoral, the wilderness that lives in collaboration with our attempts, insistences, on domesticity. Control. Is still a wild animal. Trees live no differently than in the wild, and birds as well, adapting. When these adaptations take, wouldn’t our pastorals shift as well? A matter of attention, beyond eco-poetry, beyond green. Already there, part of a system larger than ourselves, one we simply should admit to being part of.

Seasons shift, the rain. The shifts in weather that tear down fragile barriers, monuments to our imagined, shallow attempts at dominance over nature. No matter how hard we try. New Orleans.

The rain still streams down Nanny Goat Hill, rolling west down Somerset West to Preston Street. The world exists, and here we are, a part.

What this, pastoral. So called. So often dismissed for how deeply it is misconstrued, needlessly reduced. Ignoring the boundaries for the oversimplifications. Why border such at all? Why forsake the wilderness entirely for only fields? Not merely metaphor-driven lyric narratives, but a matter of attention. Not as Anne Simpson alludes in her The Marram Grass: Poetry & Otherness (2009), a poetry, a pastoral, separate from the natural world, but a human consideration and experience already a component part; exploring relationships I would argue, instead, between the two. We already live in the world, why pretend to be apart? Include Monty Reid’s Flat Side (1998), Barry McKinnon’s Pulp/Log (1991), or Don McKay’s Long Sault (1975). Margaret Christakos’ Not Egypt (1989), Welling (2010). Karen Solie’s Pigeon (2009). Phil Hall’s The Little Seamstress (2010). Ken Belford. Peter Culley. For example.

This is about attention, not of stepping back into how poems once were, should be. This is an attempt to pay attention. Pay attention.
Posted by rob mclennan at 11:14 AM
Labels: essay, Glengarry