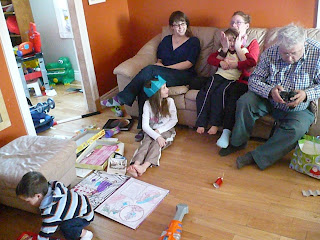 This is what we looked like on Christmas Eve, just after lunch; my daughter, Kate (who turns 20 on January 4), with my sister Kathy (holding her middle, Rory), Emma (eldest) on the floor, our white-haired father (why won't he look at the camera?), and Duncan on the floor, ignoring everything. This was the best picture I could manage of the bunch (like herding cats, I swear to god).

A little bit stressful, our first Christmas since mum died in August. I suggested to Kathy that we take turns yelling at each other, randomly, for no reason, but she didn't like that so much. Apparently she has her children for that.

Not what I expected 40 to be, certainly. I am hoping this next year far better, on the whole lot of us.

Been on the farm a few days, second trip in less than two weeks, various things happening, various stresses that require assistance. Last week, it allowed me to catch the Christmas show at Maxville Public School, with Kathy's two girls performing -- Emma was a tree, and Rory a star. What fine performances they both gave. Haven't been in that building since I left grade six, "class of 1982." Duncan wanted to participate too, but isn't in school yet (Kathy had to catch him before he climbed, for reasons unknown, underneath the stage). And then Emma's 7th birthday, which involved a household of three children inviting in seven more, including two for a sleep-over; what was my sister even thinking? Heh; at least she had wine.

Arrived back here the morning of the 23rd (thanks to a ride from Stephen Brockwell), returned to pick up Kate the following morning. Christmas eve was dinner at my sister's house, and presents. Kathy been going through stress, so after returning Kate home Christmas morning, we went to Cornwall to see a movie (The Tourist, much better than we'd expected, despite the first third all over the place, not making sense). Boxing Day means Kathy in Ottawa at the sales with our cousin Lori Anne and Aunt Bette (widow of our mother's youngest sibling, Bob), before Dad and I take Kathy's children up to Orleans to meet up for another dinner. Family, etc.

Back to Ottawa tomorrow, I think. Not entirely sure, yet. 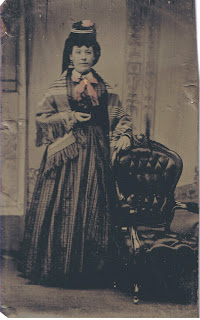 Home now means scanning, also. Since mum went, found some hundreds of photos from her family, including a steamer trunk belonging to her own mother, who went a decade earlier. It means photos going back another couple of generations on all sides, including an old tin type image of my great-great-grandmother (one of six tin images I've found, and the only one, apparently, labelled). This is an image of Sarah Jane Carroll (June 5, 1852, Kemptville -- March 14, 1903, Kemptville), who married William Patrick Swain (May 8, 1847 -- April 22, 1907), later parents of my mother's mother's father, Joseph Joe Swain, WWI veteran, and later, who retired to be a school crossing guard in Kemptville for generations of schoolchildren.

Scanning pictures and emailing out to various family members, depending on which shots. Uncle Bob baby photos to his widow and children, pics they haven't seen either. Their second post-Bob holiday.

Going through my father's family photos too, since so few left to know who anyone is. Why are so few of these labelled? Many my father doesn't even know, potentially making them entirely lost to us. Working through all of it the past four months into a creative non-fiction manuscript of some sort that keeps getting larger. Not entirely sure where it might end up, all go. At this point, I don't think I should even be thinking of such; I should just be researching, scanning, organizing, and writing. Let it naturally grow.

I've found images of my mother's mother at six months, my mother's father and uncle as children, of their own parents as younger adults, of another one or two generation back; photos of my mother's first birthday, and even her first steps. My mother in Ottawa in 1956, looking dangerous and sixteen, alluring in ways I've never seen and even admire. Before we were even imaginary.

Strange the things we discover, once someone has actually gone. To fill the absences, I suppose.