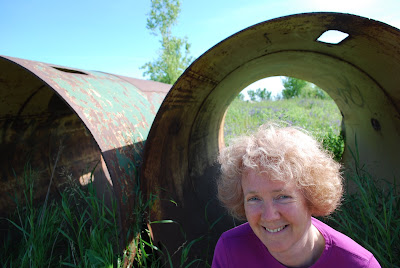 Rosie Chard is the author of Seal Intestine Raincoat, a cautionary tale that portrays a city in crisis and unearths the powerful human instincts that convert helpless fear into the desire to adapt and survive. (Published by NeWest Press September 2009) She is currently working on the final draft of her second novel, tentatively titled Ladder, a story of hate and love played out on two sides of a wall.

My first book changed my life because it altered the way I look at things. Although I have always been interested in small details, the way a person stands, the way adjacent colours react with each other, I’m now always wondering how those things can become part of a story.

Also, it led to new friendships. Winnipeg has a thriving writing community and as I was a newcomer to the city when I began my first novel I got a chance to become part of something.

I wrote some poems when I was about six years old but lost interest in it until I started writing my second book Ladder. This novel is written from the viewpoint of a young girl who loves poetry so it was an opportunity for me to use this form of expression within the framework of a novel.

Once I have an idea the writing comes quickly. It’s the re-writing that takes the time. I often write rough drafts in a journal with a beautiful ink pen (the implement is important) then transfer the work to the computer for re-writing and editing.

I find it much more difficult to write short stories than novels so I have only written very few short pieces. I started both my novels with the intention that they would be long-term projects and most definitely ‘books.’ I usually write an outline structure and then start by writing scenes. I can usually visualize the content of the scenes quite clearly but in the beginning don’t know what order they go in or how they might be related to the other types of narrative. The characters usually won’t speak at first so dialogue comes last.

The starting point for both my novels was trying to get a sense of the zeitgeist of the day. I thought very hard about what really shapes our lives in the twenty first century. What concerns people? Where are we in time and space? What forces structure our lives?

Seal Intestine Raincoat, my first novel, dealt with the dual themes of disconnection and isolation Not only are there millions of recent immigrants in the world who are separated from their original communities but city dwellers in general are becoming increasingly disconnected from their geography and climate. I remembered a piece of clothing I had seen many years earlier in a museum in England. It was a seal intestine raincoat made by an Inuit man in Northern Canada and it seemed to epitomize a way of life that used to be so independent and intimately connected to the land.

The large-scale wall building that is currently going on in many countries throughout the world inspired my second novel, Ladder. In this I explored the themes of human territoriality, repression and boundaries. I also considered the power and meaning of garden making

When I began writing I realized how much everyone loves stories. People are hungry for them, so I think the most important role of the writer is to tell stories that readers are provoked by and/or empathize with. When people first gave me feedback on my writing I began to realize that they really did bring their own perspectives to the tale which not only gave the work a greater texture and depth but allowed them, as readers, to react with the story in their own terms.

For me the process of working with an outside editor is essential.

Working with the editors at NeWest Press (Doug Barbour and Tiffany Foster) on my first novel was an absolute joy. I respected their opinions and I felt they respected mine and it was wonderful to see the manuscript just get better and better.

Something that was said to me just before giving the reading at my recent book launch-‘read slowly and glance at the audience every now and then.’ Quite simple but it seemed to be worth remembering.

10 - How easy has it been for you to move between writing and gardening design? Are there similarities, overlap at all between? What do you see as the appeal?

The transition from garden design, creating something via a drawing, to writing, creating something via words, has been a fascinating one for me. I have spent my life as a landscape designer visualizing something that isn’t there and then using a drawing to explain it to someone else. There are many similarities with the writing process and each form of creativity has enriched the other. In fact in my second novel, Ladder, one of the main characters driving the plot is the garden. Garden design involves thinking about scale, rhythm, movement, tension, juxtaposition, contrast and time scales, all of which are important during the writing of a novel.

I write early in the mornings at the weekend and often in the evening during the week. I cannot write without music and listen to the same tracks repeatedly. Gavin Bryars, Angelo Badalamenti (Twin Peaks) and Captain Beefheart all make great background music.

I put the piece away for a while and do something else. I also ask other people to read it because good feedback often seems to jumpstart stalled writing.

To be honest, my computer.

I like fragments, collected from almost anywhere, that can be put into a new context and so become something else. The animated films of the Brothers Quay and Jan Svankmejer are wonderful examples of this. Museum collections are also a great source of ideas.

I have recently begun to enjoy poetry and am reading the works of Emily Dickinson, Edgar Allen Poe, and William Carlos Williams.

Without question, see more of the world.

When I was at school I told the careers advisor I wanted to be a journalist. He told me it was a cut-throat business and I would never survive. Unfortunately I listened to him.

When I first immigrated to Canada I could not get a job for the first eighteen months so I decided I would fill the time productively and write a novel. The key was having the time, not only to focus on the writing but also to think what would be an interesting thing to do and how to go about doing it.

Storming the Gates of Paradise by Rebecca Solnit.

What was the last great film?

The final draft of my second novel Ladder. I’m also thinking about and researching my third novel.