12 or 20 questions: with Jacob Scheier 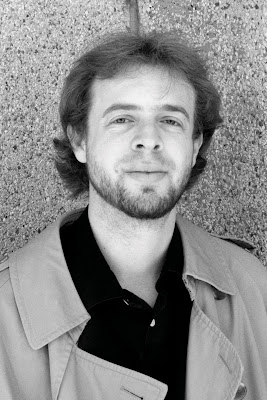 Jacob Scheier is a born poet and journalist, currently living in . His debut collection of poems, More to Keep us Warm (ECW Press 2007) won the 2008 Governor General's Award and was named amongst last year's 'best in verse' by The Winnipeg Free Press. His poems have been published in several magazine and journals, and aired on CBC radio. He is a regular contributor to 's NOW Magazine and to NYC's The Indypendent.

My first and thus far only book made me realize how little becoming a published author actually changes one's life. It seemed substantially more glamorous before it actually happened to me. Of course, my first book also changed my life a lot since it won the GG and turned me, due to the well publicized controversy around the award, into being or at least feeling like notorious poet (which seems like it ought to be an oxymoron). And even that hasn't really changed my life. So I think if anything my first book made me realize I write more than anything just because I have to. To write poetry, or anything literary for any other reason (than necessity) just strikes me now, more than ever, as pretty absurd.

I think I have a short attention span and never really had the patience to write something that can't be finished (in rough draft) in a single sitting. It's also how I experience life - very episodically - and so poetry has also felt like a more accurate expression of my experience of the world.

I am kind of working on a cohesive writing project now. I thought I had started it about 8 months ago. And only now do I feel it's really started. As far as process goes, I like what Paul Valery said: "a poem is never finished, just abandoned." That sums it up pretty well.

My first book definitely was a series of individual poems that gathered into a collection over time. What will eventually be my next poetry book is a bit more directed, in that the subject matter is more specific, though not much more. I recently realized that my book is about 'place' - that's still pretty general. But for me that's progress - if being more specific is progress. I think poetry strives, or rather I strive for a certain immediately in my poetry and so having end goals is kind of counter to what I am trying to convey in the work. I've realized this the hard way after several frustrating months imposing some fairly stringent goals and ideas about what this collection is specifically 'about.'

I enjoy them when they go well. People showing up to the reading is a good start. Laughing at the parts that are suppose to be funny helps too. I have to confess I like the attention of reading in public... most of the time.

Sure. The questions more often reveal themselves as I'm writing. I've been thinking a lot about making poetry politically progressive and how accessibility needs to a part of that. I think it's ironic that some poetry that claims to be rather radical often is fairly inaccessible to those who don't have a higher education, which begs the question radical for whom? On the other hand, there is also quite a lot of overtly political poetry I don't care for because it's lacking a certain artistic depth and emotional poignancy. I don't claim to be writing in the proper middle ground, only that the issue concerns me. I am also really interested in the convergence of the historical, theoretical and personal. For instance, I am researching and writing a lot right now about my grandparents and my parents, who were all communists (my father is the only one still alive) - how their worldview and the historical conditions of the 20th century interacted with the most personal, the most visceral and traumatic moments of their lives.

I ask myself that a lot. This probably seems like the easy way out of the question, but different writers, particularly writers of different genres, probably have different roles. I think the role of a lot of poets is to give people pause, recall that we are alive now, and for lack of a better word acknowledge that it's all pretty weird. A poem has as much purpose, since it can be very similar, as those rare, truly honest moments between two people (whether silent or in conversation). I don't know why it's important that such moments occur now and again, but it makes me feel better about being alive when they do.

I find it challenging, but absolutely essential. My editor, Michael Holmes, really challenged me to cut away the excess, the pre-writing and summarizing - the protective shell I was putting up around my poems. It hurt sometimes, but the finished product of my first book was substantially stronger than the manuscript in its initial draft.

"Don't let the bastards get you down."

The other genre I write in is journalism, both opinion pieces for NOW magazine and more recently reporting for The Indypendent, a "radical" newspaper in ). It's pretty much the furthest thing from a poem I can imagine, particularly the reporting. In many of my poems I allow the "I" to enter the observed subject till it is either dissolved in or perhaps splintered by it. In the reporting I have to stand outside 'the story' as much as possible. The poetry seems more honest, less contrived. It's a hard transition for me and when I am in journalist mode I have a hard time getting into a state of being compatible with the poetry writing. The appeal I think is writing something so different from what I am comfortable with, and in the process becoming different. I think writing in different genres adds layers to the personality, if not the for lack of a better word, the soul. This more recent move into journalism in being so external versus the internal world of the poetry, offers me a kind of balance in how I approach my lived reality, which is probably a good thing.

Unlike every other part of my life, I am pretty regimented about this: Two hours first thing in the morning. Sometimes other projects or life in general prevents this - but most of the time that's what I'm doing. I also don't go back to the same poem, as a general rule, for at least a week after I've written it (though sometimes I cheat).

I don't really have a plan around that. I pace. I drink. I wait for the season to change.

It's not really a fairy tale, but a fable - I think it's called "The Frog and the Scorpion." You know, the scorpion asks the frog for a ride across the river. He assures the frog he won't sting him, since then they would both drown. So the frog agrees and the scorpion stings him. As they are sinking into the water, the frog says something like "why did you do that, now you'll die too?" To which the scorpion responds, "it's my nature."

I don't know if I'm the frog or scorpion. But I'm one of them.

Definitely, all those things. I would add politics to that list, like science it’s one of those things that people often try to distill as something wholly rational - I think one of the poets jobs is to poeticize such things, remove their veneer of objectivity or factuality.

I find that question really difficult to answer - it's always changing, of course. It’s difficult to think of two poets who have influenced me more than Leonard Cohen or Frank O'Hara. I would also say, oddly enough that Virginia Woolf and Ernest Hemingway have quite noticeably effected how I write poetry.

My mother's published (and unpublished) poetry and perhaps more her private journals which I have the misfortune and blessing to have inherited, effect every aspect of my life including, of course, my poetry.

If I could go back ten years, I would devote much of my time to becoming a staff writer on The Daily Show. But I guess that's cheating since it's still writing.

I don't know. I ask myself that a lot - what the hell is this being a poet - it's pretty weird, if not masochistic. I think I have to do it. That's the only answer that makes sense to me. If I could do something else (and not go completely crazy) I would be doing it.

The last great book I read was probably Naomi Klein’s The Shock Doctrine - I think that book will prove itself to be one of the most important and prophetic books of the 21st century, if it hasn't already.

I also read Elizabeth Baschinksy's Home of Sudden Service and was really moved by it. It made me want to write sonnets more often, and I hate writing sonnets.

I will make this short, since I have alluded to it already. I am, in bursts, working on poetry collection about my radical-American-Jewish heritage. Some of the questions I am exploring through the medium of poetry are: what is this shared history of being red and Jewish (shared amongst so many Jews)? And now that the Marxist meta-narrative is at best problematic, what happens to Jews like myself coming out of that heritage? It turns out these are poems about ‘place’ and ‘home’ and lack of both those things, but it took me months to realize that. Thanks.