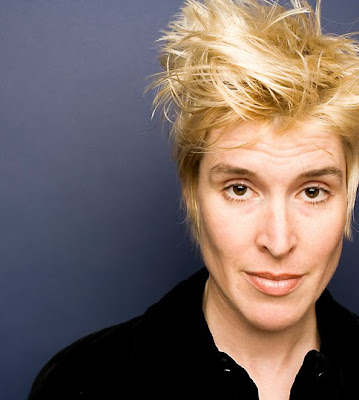 Lisa Pasold has been thrown off a train in Belarus, been fed the world’s best pigeon pie in Marrakech, learned to polka at Danceland, and been cheated in the Venetian gambling halls of Ca’ Vendramin Calergi. She grew up in Montreal, which gave her the necessary jaywalking skills to survive as a journalist. Her first book, Weave, appeared in 2004 and was nominated for an Alberta Book Award; her second book of poetry is A Bad Year for Journalists, described as "critical, darkly funny and painstakingly lyrical" by The Globe and Mail. Her work has appeared in publications such as Billboard Magazine, The National Post, The Chicago Tribune, New American Writing, and Geist. Her first novel, Rats of Las Vegas, has just come out from Enfield & Wizenty.

1 - How did your first book change your life? My first book, Weave, came out with Frontenac House in Calgary & they make their poets feel like rock stars. Well, maybe not so much cocaine but still… How does your most recent work compare to your previous? How does it feel different? The new book, Rats of Las Vegas, is a novel (out with Winnipeg press Enfield & Wizenty) so the experience is really different with fiction. There’s much more pressure to sell books! But also, more bookshops are interested in carrying the book, there are more options for festivals & things, which is fun. On a day-to-day level, really the most noticeable difference is the new book is hardcover, which is much heavier to carry around than a bag full of poetry books!

2 - How did you come to poetry first, as opposed to, say, fiction or non-fiction? Poetry seemed more flexible and more intuitive. I had taken writing classes and always had to write short stories, and I don’t like writing short stories. It isn’t a form that I have any talent for—maybe I’m too impatient for their subtlety. Poetry has always been immediately more attractive and playful and interesting to me. Also the spoken, shared aspect of poetry readings is very exciting. It’s a spur to work harder, to get into the community discussion.

3 - How long does it take to start any particular writing project? Does your writing initially come quickly, or is it a slow process? Do first drafts appear looking close to their final shape, or does your work come out of copious notes? I write quickly but I throw away a lot. Every now and then, I keep some poem or length of prose more or less as it began, but usually I need to edit a lot. I write & rewrite & take about a third of the writing out. Then I rearrange what’s left. Feedback from other people is a life-saver, too; sometimes, taking new work to a reading can be a good spur to rewrite & make it better. Workshops are great. Just hashing through some work over beer with friends can also be really helpful. Doing research is often helpful too, though the facts don’t always surface in the final draft.

4 - Where does a poem or piece of fiction usually begin for you? Often just a phrase I overhear. Are you an author of short pieces that end up combining into a larger project, or are you working on a "book" from the very beginning? I’m better off pursuing a book-length idea with lots of fragments. That way, the bits & pieces eventually come together to form the bigger idea I had in mind. That process means I have a lot of large projects that are slowly accumulating, and others that I abandon after only a little bit of work.

5 - Are public readings part of or counter to your creative process? Essential part of the process—you can immediately see what’s going over, what’s not. Are you the sort of writer who enjoys doing readings? Readings are wonderful—a way to connect to readers, to hear what they think, listen to other people’s stories. I love doing readings, even though they make me so nervous I can barely remember what I’ve said.

6 - Do you have any theoretical concerns behind your writing? What kinds of questions are you trying to answer with your work? What do you even think the current questions are? I guess I’m trying to answer a pretty basic question—the “what is the point/is there any point?” question. Otherwise, I’m not very clearly motivated by theory. I just love the play of language.

8 - Do you find the process of working with an outside editor difficult or essential (or both)? BOTH!! Aren’t the things most worth doing, often the most difficult?

9 - What is the best piece of advice you've heard (not necessarily given to you directly)? Jack Kerouac’s “Love your life.” Not that he exactly took his own advice.

10 - How easy has it been for you to move between genres (poetry to fiction to journalism)? Different kinds of voice seem to come naturally in different genres. And having different things to work on—an article or a poem or editing a piece of fiction—means that when I’m blocked on one thing, I can work on the other. What do you see as the appeal? I think different genres give us different ways of approaching ideas & stories. Kind of the way different languages offer new ways of thinking & communicating. At the moment, I’ve started work on a novel that has a lot in common with my poetry book, A Bad Year for Journalists. But the way the ideas are coming out is completely different & it’s giving me a new way to think about the problem of media & responsibility.

11 - What kind of writing routine do you tend to keep, or do you even have one? How does a typical day (for you) begin? I get up and walk the dog. Then, on a good day, I can spend all morning at the computer, writing. Whenever possible, I push other work into the afternoon. I wish I wasn’t a morning person, but I really am. I like getting up when the sun’s just rising. The day feels so calm and possible. If I can’t write for very long, I still try to get a little bit done in the morning, even if it’s on a subway, writing in a little notebook. Otherwise it’s difficult to keep the writing head going forward.

12 - When your writing gets stalled, where do you turn or return for (for lack of a better word) inspiration? Walking the dog. Reading books that are sort of sideways related to the work. Going out to see a performance—theatre, dance, something alive and ephemeral.

13 - If there was a fire, what's the first thing you'd grab? My wedding ring, because a friend made it for us.

14 - David W. McFadden once said that books come from books, but are there any other forms that influence your work, whether nature, music, science or visual art? I find the outdoors does sneak into my work constantly, though I really am not a nature poet. And I usually work to music—a different soundtrack for every project. For Rats of Las Vegas, I listened to this wonderful strange album Eccentric Soul and Leonard Cohen, with some Paul Simon, The White Stripes, and of course, Sinatra. And live performance, it’s a very different kind of magic from writing, but it opens up my head.

15 - What other writers or writings are important for your work, or simply your life outside of your work? I have some trouble separating what’s important for work & what’s simply good for my life in general. Right now, I would say Anne Carson, Raymond Chandler, Philip Gourevitch, Michael Ondaatje, and a small dose of Ruskin.

16 - What would you like to do that you haven't yet done? Oh, now there’s a long list there… I would really like to drink a lot more champagne, preferably travelling by train through a country I’ve never visited before, while interviewing people & sharing stories with them & writing more books…

17 - If you could pick any other occupation to attempt, what would it be? Or, alternately, what do you think you would have ended up doing had you not been a writer? Probably a radio journalist, that’s what I was planning to do when I was in university, but then I got distracted. Now, if I weren’t writing, I’d probably be in Paris working as a tour guide.

18 - What made you write, as opposed to doing something else? I really like writing; I’ve wanted to do this since I was five or six. I don’t trust writers who “hate writing.” Why bother? Why not volunteer for a cause, save the whales or something? I write because it’s the best way I have to find out about the world, to connect with people, and I really believe that’s crucial for all of us: E.M. Forster’s “Only connect.”

19 - What was the last great book you read? What was the last great film? I just finished Charles Wright’s Sestets, and Martha Baillie’s new novel The Incident Report—I love the form she’s used. And I’m nearly through reading Andrei Codrescu ‘s The Posthuman Dada Guide, which is razor-edge brilliant. In film, I just saw Where the Wild Things Are, nicely enigmatic & beautiful.

20 - What are you currently working on? A novel called Up to the Knee and a new collection of poems, partly about Marco Polo’s route through Afghanistan. It’s awfully difficult to describe a project before it’s finished…and might be bad luck, too!

Posted by rob mclennan at 11:05 AM
Labels: 12 or 20 questions, Enfield and Wizenty, Lisa Pasold