It was bones that counted, not the flesh
— Catherine Sasanov

A hard-won morning made for vodka on the breath. I wrote a novel where nothing at all happened, but for the moments between the scenes, just after or before the page had even begun, left for the reader to construct the rest. I had left all the important tools.

an aperture of trees
& January cloud

when a matter hits, it hits
hard

We walked down to the pub and ordered breakfast, still there twelve hours later. She read an essay on translating F. Scott Fitzgerald’s The Great Gatsby into Japanese from Brick: A Literary Journal. She flipped through Robert Kroetsch’s Excerpts from the Real World.

If everybody became vegetarian, the woman at the next table says, I don’t know what would happen. I am nothing if not persistent. I would rather have an orange than tomato.

in winter where the nights
can come up less

the shape
of where we’re not

My girlfriend the night before, a text message to land line, robot voice on my answering machine leaving sweet nothings, one ghost to another. When, I wondered, will the robot voice again become real?

Does it matter the temperature outside? Canadians, Lea said, don’t seem to talk about the weather. January snow falls in waves. The snow plows pan by my window past midnight, blue lights flash flicker down the lone dark hall. Where are you now?

Benjamin Button, a clock runs backwards, can’t imagine best actor or actress anything because how can you separate. Amazing as a full complete unit. She cried a little, less because I there. How do we not move backwards, ticking to the unmaking, unlistening of things?

at the advent of police,
significance wanders

the kid in the comically large
red shorts

irradiate, a sample
on skin

Rusted out the corpse. The car in the front or the back of the lawn. Where did you find me? The night we sat martini’d at The Mercury Lounge or three years later, now, the same at Absinthe, exploring Westboro with Stephen Brockwell, Brendan Hodgson. Leonardo DiCaprio lights a cigarette on television, another film clipped.

takes her time, she burns
the sugar light

The reformed Pentecostal who dropped his farm to be a fire extinguisher inspector, the same time he discovered Jesus. Working against hellfire, body and soul, attempting to convert everywhere he went. What better to parallel? Situated between the sad Phoenician and what comes next, working to reduce her sadness.

a degree,
of single molecules 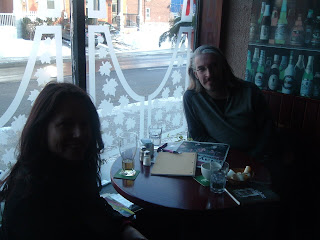