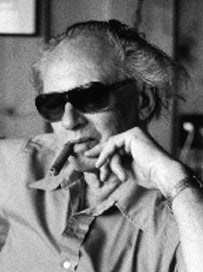 In recognition of the importance of Al Purdy to Canadian poetry, the iconic symbol of the A-frame to Canadian culture, and in support of the Purdy A-frame Trust, the League of Canadian Poets officially declares APRIL 21, 2009 NATIONAL AL PURDY DAY. We invite all Canadian poets, and lovers of Canadian poetry to host a Purdy Party to raise funds to preserve this important cultural and heritage property. Al Purdy, the man widely regarded as Canada's first true national poet, died in April, National Poetry Month, in the year 2000. In a way, his death marked the end of a century in which the Canadian cultural identity under pressure from separatist tensions, two world wars, the rapid development of the mass media and the sensation of being a young nation adrift between older colonial powers and our newer imperialist neighbour experienced its most profound growing pains. No other poet was as resolute in addressing those pains as Al Purdy. He did so not only by writing about the issues head-on, but also by listening to the people around him, by writing a poetry rooted in the daily life of the people and places of the Canada he knew and loved, from sea to sea to sea. He was writing poems that were relevant to Canadians, and, for over forty years, Canadians listened.

The position of Canadian Parliamentary Poet Laureate was not legislated into existence until 2001, so Purdy never ascended to the office that so many believed he was meant to inhabit. In lieu of any official laurels from Parliament Hill, the League of Canadian Poets created an award to honour Purdy for his exceptional status among Canadian writers, and, just weeks before his death, they invested him with the honorary moniker "The Voice of the Land." It was one of many accolades the poet would receive in his lifetime, and it would be among of the first to follow him, quite literally, to his grave. The words "The Voice of the Land," along with the insignia of the Order of Ontario and the Order of Canada, are inscribed on Purdy's book-shaped gravestone, marking the place where his ashes are buried in the modest cemetery at the foot of Purdy Lane in Ameliasburg, Ontario near the famous A-frame. That A-frame house, made out of second-hand lumber and original poetry, became the most famous writer's house in the country. Hundreds of writers and their housemates found their way to Roblin Lake to visit the Purdys and talk about poetry and history while downing beer or wild grape wine. Coleridge and his friends had their lake country, and now the Canadian poets would have theirs. A lot of poetry and prose came out of that hard-to-find place. To prevent its second-hand wood from ending up on someone's scrap heap, and with the blessing and support of Eurithe Purdy, The Purdy A-frame Trust is raising funds to purchase and preserve the property, create an endowment and establish a poet-in-residence program.
For more information or to make a contribution to the Trust contact:
Jean Baird
4403 West 11th Ave.,
Vancouver BC
V6R 2M2
604 224 4898
jeanbaird@shaw.ca
http://www.purdyaframe.ca/
Posted by rob mclennan at 10:43 AM
Labels: Al Purdy, Jean Baird, poet laureates