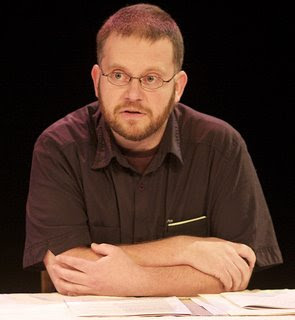 This interview was conducted from November to December 2008

Roger Farr is the author of SURPLUS (Line Books, 2006), a co-author (with Reg Johanson and Aaron Vidaver) of the collaborative research project N 49 19. 47 - W 123 8.11 (Recomposition, 2008), and editor of the sporadically published journal PARSER: New Poetry and Poetics. A former member of the Kootenay School of Writing collective, his critical writing on avant-garde poetics and autonomous social movements appears or is forthcoming in Anarchist Studies, The Encyclopedia of Protest and Revolution, Fifth Estate, Islands of Resistance: Pirate Radio in Canada, Perspectives on Anarchist Theory, The Poetic Front, The Rain Review, W, West Coast Line, and XCP: Cross Cultural Poetics. Recent publications include an interview with Louis Cabri in the Fall 2008 issue of The Capilano Review, and selections from IKMQ, a collection of micro-fiction, and Means, a book of poems about the relationship between forms of expression and political composition. Currently he is on leave from his post at Capilano University, where he is Convener of the Creative Writing Program and editor of CUE Books (Capilano University Editions). [photo credit: Glen Lowry]

rob mclennan: How did you first get involved w/ the Capilano Press Society and TCR?

Roger Farr: My first involvement with the journal was as a reader in the early 90’s, then much later as a contributor. In 2001, while Ryan Knighton was editor, Jason LeHeup edited two volumes on the small press in Canada that included the last issue of estrus, a ‘zine I had worked on with Aaron Vidaver, Steve Ward, and Carolyn Doucette. Later that year I was hired as a sessional at Cap and was stationed in the TCR office with then Managing Editor Carol Hamshaw, so I was hard to ignore. I read poetry submissions for TCR periodically when Sharon Thesen was editor, but didn’t officially join the Capilano Press Society until 2003. In 2006 Jenny Penberthy, the current editor, invited me to edit the “Six Cities” issue.

rm: How did the idea of book publishing come about? I know other Canadian journals have done versions of the same, with Snare Books coming out of Matrix magazine in Montreal, and West Coast Line more recently starting up their own series of trade books (finally giving a home to the Tsunami Editions backlist). Why did The Capilano Review, after so many years, finally decide on the same?

RF: CUE is somewhat distinct from TCR. Both are published by the Capilano Press Society, and they obviously share concerns and resources, but under our current arrangements they have different editors; so let’s say they have what Poulantzas calls “relative autonomy.” But all these publications you mention became models/inspirations for us, especially Line Books. Mike Barnholden was very helpful and gave us lots of good advice and tips.

That said, Pierre Coupey, founder of the Capilano Press Society and of TCR, has always wanted to publish books. In fact, TCR has been publishing books for some time. There was Pacific Windows, the Kiyooka issue edited by Pierre in 1990 which was by all estimations a book (though I think it has an ISSN); and under Sharon Thesen’s editorship in 2003 we did Gerry Shikatani’s book Three Gardens of Andalucia, which has an ISBN but was released as a special issue of TCR. And there have been others.

But CUE really begins – fittingly, I think, given our ties to the avant-garde poetry and arts communities in Canada – with the publication of George Bowering’s According to Brueghel (one of his 12 chapbooks of 2006) in early 2008. If I remember correctly, Jenny was going to run the piece in the journal, but it came in at around 40 pages, so she came up with the idea of doing it as a chapbook, and George agreed. Pierre and Jenny then decided to look at doing a Billy Little Selected, edited by Jamie Reid and George Stanley, which eventually became our first “trade” title – also very fitting. Jenny then persuaded the Dean at Capilano to give us seed funding to get three more books to press. Somehow she accomplished all this in about four or five months! This Fall she turned the reins over to me in order to focus on the journal.

rm: What do you see CUE accomplishing (or hoping to accomplish) that you see publishing otherwise lacking, and what has been the response so far? Do you see CUE as having a parallel mandate to what TCR has been doing over the years, or are you wanting to take it in a different direction?

One of these problems would be the old chestnut about the lack of space for socially and critically engaged avant-garde writing, which is true enough (you hint at this in your recent review of Best Canadian Poetry of 2008, and I mention it in my introduction to the Open Text anthology, which was in part an attempt to correct this problem). That said, I don’t think inclusion of avant-garde poetry in anthologies is necessarily the best way to refuse our anesthetization by official verse culture; in fact, it may even prolong it. What we really need are more presses working to alter the way avant-garde writing is received and how it is used, which, in addition to “the works themselves,” requires books of interviews, critical writing, theory, and the like, to help create new readerships. Usually this kind of publishing is (unfortunately) left to the academic presses, which CUE both is and isn’t, and to a handful of journals like West Coast Line, XCP: Cross Cultural Poetics, Open Letter, etc.

So I’d like to see CUE become such a press, offering several “series” of books, including avant-garde poetry, poetics and fiction, as well as graphic narratives, creative non-fiction, and critical work in communications theory, cultural studies, and the visual arts. In most respects this is a parallel mandate to TCR, but with more critical writing. Capilano as an institution is known for its strong programs in what for lack of a better term I’ll call “the cultural industries” (ie, Creative Writing, Culture and Technology, Film, Jazz, Studio Arts, Theatre, Textiles, etc.), and we have considerable faculty expertise in these areas, which is a huge resource we intend to draw on.

As for the response, we released the first set of books in late October, so they’re just starting to make the rounds. The launch was very successful. And we’ve been warmly received locally.

rm: Didn’t you worry about the difficulties in starting a small press now, considering the state of literary publishing? Who currently distributes your books?

RF: I don’t worry about it. I don’t think Jenny did. We just wanted to do it. Maybe it was a bad idea! At any rate, we’re working on distribution arrangements right now.

rm: What comes next for CUE?

RF: In addition to some new books of poetry, I’m developing what I hope will be the first of a series of monographs, written by poets and artists, defining key concepts and problems in aesthetic theory. I’m also in discussions with a local curator and editor about collaborating on a book, or series of books, of critical writing about contemporary art in Vancouver. The second installment of the Open Text anthology is underway, as is an ancillary webpage with links to materials by and about the contributors. And keep an eye open for Ted Byrne and Christine Leclerc, who will be “out east” reading from their books this Spring.
Posted by rob mclennan at 10:02 AM
Labels: CUE Books, interview, Roger Farr, The Capilano Review