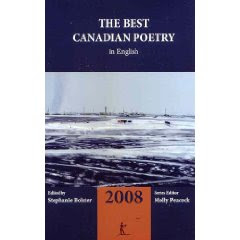 Sleeping with the River

All that winter as the rains arrived,
sometimes as nobody’s footsteps,
sometimes as ack-ack, sometimes
hard bits of Braille flung at the house,
the mailbox, the woodshed, at the car parked
in the driveway, at all that is solid, all
that winter leaving the window open to its
pizzicati, hearing them accelerate and blend and
drown in the river’s big
ambiguous chorus, all that winter being
swept asleep thinking river is only rain
that has its act together, song that has never
passed through speech, unschooled,
other-than-us, thinking
this must be the voice of what-is as it
seizes the theme, pours its empty opera,
pumps out its bass line of sea-suck and blues. (Don McKay)

After watching the Americans produce the same for years, it seems interesting, ambitious, brave and even a bit foolhardy for someone in Canada to attempt the same, but the annual “Best Canadian Poetry” anthology has now been launched, with the appearance of The Best Canadian Poetry in English, 2008 (Toronto ON: Tightrope Books, 2008). With series editor Molly Peacock, and first volume guest editor Stephanie Bolster, over one hundred poems were initially chosen from Canadian literary journals and magazines, boiled down to fifty to make up the current anthology, with the remaining long list of fifty listed at the back of the collection. As Montreal poet, editor and guest editor Bolster wrote to begin her introduction:

Who do you think you are? The phrase, inseparable in the minds of Canadian readers from Alice Munro’s book of that title, has arisen in a number of discussions with fellow writers over the years, referring specifically to the reluctance – in these conversations posited as particularly Canadian and, though perhaps secondarily, particularly female – to pronounce a viewpoint. It appeared in a thought bubble over my head when I received an e-mail from Halli Villegas early in 2007, asking if I would edit the first annual The Best Canadian Poetry in English. The invitation came as a surprise, an honour, and a privilege, one that I hesitated to accept not because of the inevitable time-drain, but because of the responsibility.

Can one, as the editors claim, wander through this anthology and get a sense of what is happening over the past year in Canadian journals? I would say not really, but it’s a good first start, although I am disappointed that they decided not to work their ways, also, through online publications. Still, with the work needed to put together a first volume, and wading through numerous Canadian print journals, I can understand why. At some point, I do hope they can work some online journals in, considering that there are some authors who might publish in one genre (print or online), but not necessarily the other. Why work to exclude? I know the American series considers online publications, whether Shampoo Poetry, Moira or Milk, and whatever else is published by our immediate neighbours. As series editor Molly Peacock writes in her prologue:

Canadian English language poetry is a dynamic art, and those literary journals that publish poetry reshape the landscape of Canadian letters every year. Yet few of us, even the most avid poetry-trackers, peruse all these magazines, and many of us are bewildered by their abundance. This is the primary reason for our yearly series. Our annual pulse-taking will track the birth of ideas, language, and rhythms of culture across the English Canadian poetic landscape. As well, it will highlight the emergence of new voices and the renaissance of familiar voices. From sound poems to confessional poems, from loose-limbed narratives to formal verse, from bellows to whispers, from the avenues to the bush, from west to east and all directions in between, prosodic decisions, geographical propensities and cultural proclivities give Canadian poetry its astonishing variety. The Best Canadian Poetry in English addresses both the confusion and the plethora by narrowing the field, providing a kind of qualifying finals for poetry every year.

The back of the collection includes has a list (with contact information) of the thirty-four Canadian print journals consulted for this collection, including The Antigonish Review, The Capilano Review, dANDelion magazine, Descant, The Fiddlehead, filling Station, Kiss Machine, The New Quarterly, Prairie Fire, QWERTY and Taddle Creek. One of the things I always wondered, if Canada had its own version of this series, is if the series would allow some of our less “mainstream” writers to edit a volume; I know one of the American editions was edited by Robert Creeley, and I’ve wondered out loud if a Canadian one would ever let our Creeley-equivalents, say, perhaps, George Bowering, Robin Blaser or Fred Wah, for example, even near such a thing. One of the American editions even included works by Erin Mouré, Steve McCaffery and Anne Carson; would such be allowed near a Canadian volume (keeping in mind, they would have to be publishing in Canadian journals that year to be considered)? I do like the book’s range, and there are some compelling pieces by some I wouldn’t have expected to see in such a book, including Dani Couture and Jeramy Dodds, and impressive pieces by old favourites John Barton, Susan Elmslie, Peter Norman, Shane Rhodes, Aurian Haller, Meira Cook and plenty of others. But still. Is my bias showing again? Is this simply a bias of Canadian publishing, something the creators of the current volume couldn’t have worked against or foreseen? Were the so-called “avant-garde” poets simply not publishing this past year?

I cannot love you all and I won’t.

The shoulder knows the will of the heart and its way around
a crowd. The clam-soft give. The crack of the shell.

Help me recognize your humanity – talk in a low slow voice,
wave your lunch bone arms.

The children with keys at collarbone are building fires
in the tunnels, forts at every junction.

Let them go. The way is littered with leftovers –
pale while stalks, tender volva. Pick one. Another.

There are other ways home.

Brushed metal canines, the gate, will score
what you can afford to leave behind.

Impress me with your stones, your height.
The sweet dip of your neck.

All that you love,
keep high. (Dani Couture)

Part of what, at least, the American series achieves is not just an attempt at a cross-section of writing from journals across the country over the past year (finding the imagined “best,” if there is such a thing), but works to showcase that year’s American poetry to a foreign audience. This is something that Canadian writing has never quite managed to push out in the same way, given the lack of large Canadian publishers willing to produce anthologies of Canadian contemporary poetry for the sake of the foreign markets. If we don’t tell them how great we are, how will we ever know? Somehow, knowledge of Canadian poetry in the United States, for example, happens piecemeal, whether Sina Queyras producing an anthology of Canadian poetry coming out of her involvement in a reading series in New York City, the Canadian poets that have made it through SUNY-Buffalo as faculty, students or just passing through, the Lisa Robertson section in a recent issue of The Chicago Review, or other fits and starts that really don’t help to give anything much more than a taste. Is Tightrope a publisher large enough, or even interested in, pushing Canadian writing across geographic borders? Is it a publisher that should even be trying?

Illuminated by early evening sun, we walked to where the pool lies,
into the yielding forest, which shrugged when we tried to praise.

Inside its amalgam of shadow and cessation, the glassy pond
aimed its whole self down to the centre of the earth.

There was another world inside. Taut against the stick
and moss disorder, the water inscribed edge without movement.

It loved so thoroughly the small branches of the overhanging fir,
the dead, spindled tumbles of empty pine cones, the luminescence

of twinflower, wolf moss, fairy cup, mud. Its reaching became
an imitating eye, and the mirror elegy to what it loved.

Because it chose, we could see all things twice, and so had the chance
of glimpsing, the second time, what we always first ignore.

and as the water fell away, it took the image of the forest
and stretched it to the greenest shadows, taking our eyes

further and further down, and in. its lofted breadth
raveled the tapestry, learned every moment, armed gravity,

arraying knowledge in its rightness and its pull. (Maleea Acker)

But that’s neither here nor there. This is an impressive beginning to what, hopefully, can be an interesting series. The hard part won’t be in an editor selecting pieces, but in the publishers and Series Editor, Molly Peacock, picking guest editors that reflect the range of Canadian writing, and don’t simply perpetuate Canadian writings leanings away from more radical forms of writing. But time will only tell. Rumours have it that the next editor, for 2009, is already picked: A.F. Moritz.
Posted by rob mclennan at 10:02 AM
Labels: anthology, Best Canadian Poetry, Molly Peacock, Stephanie Bolster, Tightrope Books