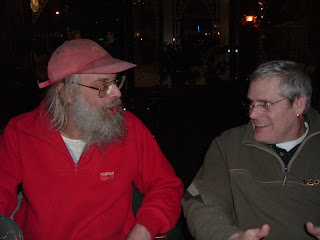 [jwcurry and b stephen harding at Pubwells during recent drinks] Will we see you at The Peter F. Yacht Club Christmas party/reading? Did you see this amazing interview with our own literary photographer, John W. MacDonald? Apparently a few people noticed my open letter to that Ottawa mayor; and then this interview with me I forgot to mention, before the last small press book fair. Does anyone know who wrote this anonymous poem for our own John Newlove? Did you see Sina Queyras' review of Amanda Earl's Eleanor (above/ground press)? And apparently Carleton University students have nothing better to do than discuss whether or not I use capital letters in my name, not even bothering to ask themselves why...

Edmonton AB: In early November, I was able to attend the most recent issue launch of Edmonton’s Other Voices: Journal of the Literary and Visual Arts. Considering the journal has made it to Volume 21, No. 1, I find it strange that I haven’t actually seen a copy of the journal for at least half a decade before this (including the nine months I actually lived in Edmonton). Why is the journal so invisible? For years, it has seemed as though Calgary has had all the journal and chapbook publishers, and Edmonton has had all the book publishers, and never the twain shall meet, so to speak, but for this semi-annual publication.

bow bridge. log-
ical fit: the sun
in the wind-

ow. the moment-
ary truth. the lost
count… the in-

An odd mix of quality, the journal publishes poetry, fiction and creative non-fiction (this issue highlights the winners of a recent contest they held in such), as well as some visual art and a book review, with some of the highlights from the current issue including Edmonton poet glenN robsoN with two poems (the formatting of which make both of them impossible to replicate; lately, he’s apparently been doing some extremely interesting sound poetry with Edmonton poet Jeff Carpenter), a suite of poems by Sean Howard, and new pieces by Toronto poet Amy Dennis; how is it she seems to be in every second journal I’ve been looking at lately?

Still, I like what this journal is doing, and what it’s trying to do; but why can’t they tell more people?

Vancouver BC: New from Peter and Meredith Quartermain’s Nomados comes L’Aviva by Nicole Brossard, translated by Anne-Marie Wheeler (Nomados, 2008). Part of what appeals about this small collection (a Nomados chapbook with perfect binding, by the by) is how the sections are separated, as to be two different texts, as opposed to the merged text. One belongs to Brossard exclusively, to be sure (as much as any text “belongs” to any author), and the first, in English, a kind of merged text through translation.

aviva a face and the relaying
of complexity, ample images
leaning toward the lure, her mouth
now the looks there are normally words
on the edge of emotion a phrase related
hidden and unknowingly caressed
while running the length of her arms in excitation
applied, the idea tenable tenacious
for linking

Brossard has been a favourite of English-language readers for decades, and numerous of her works of poetry, fiction and non-fiction have been translated into English by various translators, and this new series of texts is absolutely lovely. Is this part of a larger project that might see book-length publication at some point? And at the same time, are there other French language poets in Canada that we, in English, should be looking at? Someone emailed me recently and even asked if there was a French equivalent to the new Best Canadian Poetry in English 2008 anthology. Who even is out there?

Edmonton AB: One of the things I’ve been waiting for a few years now is that book by Vancouver poet Fred Wah that would include further of his “music at the heart of thinking” poems and “artknot” pieces that have been appearing here and there the past decade or so in journals and other places (a few appear as part of Wah’s contribution to Louis Cabri’s Phillytalks). Over the past decade or so, Wah’s publishing has certainly slowed, with a rare chapbook here or there, a series of reissues, and a new publication with Talon this past spring, his Sentenced to Light (Talonbooks, 2008). On December 2nd, he appeared in Edmonton to read at the Olive Reading Series and launched the small publication Dark Matter & Other Radicals (Edmonton AB: Extra-Virgin Press, 2008) as part of the reading series (now in its ninth season) including a couple new pieces from that same series of poems that began with his Music at the Heart of Thinking (Red Deer: Red Deer College Press, 1987).

Music at the Heart of Thinking 134

The plateau of the poem
pulling a story from a fire
smouldering under foot
on a periphery of words
as things while sentenced
to a periphery of counting
so nearly uncontained (it)
documents no geography
nor memory the windmill
street and all that walks
or reminds crankshaft, smoke
sits at the corner cheering
past the end of telling you
can smell the stones burning

For years I’ve been wondering, when do we get to see the collection that includes these scattered pieces, written as a series of “responses”? According to the bio at the back of the small publication, he has a new poetry collection out next spring, again with Talonbooks, called Splice. Is this what we’ve been waiting for all this time?
Posted by rob mclennan at 10:09 AM
Labels: Amy Dennis, Anne-Marie Wheeler, b stephen harding, Fred Wah, jwcurry, Nicole Brossard, Nomados, Olive Reading Series, ongoing notes, Other Voices