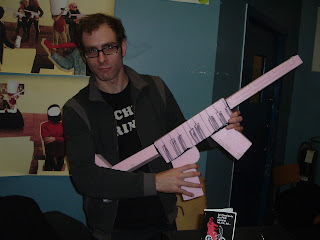 [unidentified exhibitor at Expozine; I made a point of not asking questions] Over the past few weeks, I’ve been at two different book fairs in two provinces, with my own ottawa small press fair in mid-November, and Montreal’s Expozine (called the biggest small press fair in Canada, with 175+ exhibitors) on November 30th, the same night that Monty Reid and I read for Matrix magazine’s Pilot Reading Series (see this little report on such). Did you see Amanda talk about the potential Ottawa funding cuts? 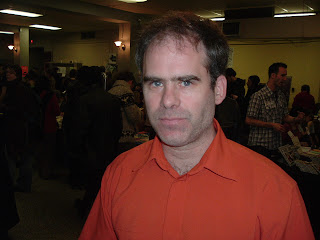 [Andy Brown, editor/publisher of Conundrum Press, at Expozine] Otherwise, apparently Stephen Brockwell has started doing reviews of plays, which is pretty cool, and Amanda Earl has launched a new online pdf journal, experiment-o. Have you heard that Clare Latremouille is considering starting a blog? Did you see all these opinions I put out there? I’ve also got some publications about to appear online as pdfs, but they just aren’t there yet, including the fifth issue of the annual ottawater, due out in January. Otherwise, I’m taking 2009 subscriptions for above/ground press, $40 per calendar year.

Ottawa ON: When founder and former editor of the journal Ottawa Arts Review returned to town from Toronto for the most recent Ottawa fair, Ottawa poet and editor Andrew Faulkner returned with five publications under the brand-new press, The Emergency Response Unit, including Marcus McCann’s Force quit (2008), Nashira Dernesch’s This Snowing Under (2008), Anya Douglas’ Poems (2008) and leigh nash’s five-seven-five: train poems (2008), as well as his own chapbook, Useful Knots and How to Tie Them (2008). This isn't Faulkner's first chapbook, but the first made my himself; he was part of a collaborative chapbook of poems by himself, Nicholas Lea and McCann last year, produced by McCann's own Onion Union, but these are the first by collaborators nash and Faulkner, with pushed production levels up, and currently focused on his immediate group of poet-friends.

Know your knots and they’ll serve you well

When you want to put a rope to work, you have to tie a knot
in it. Because often, several quite different knots might be
used for the same job, it’s important to know the general
purpose of a knot before you decide on the best to use. Since
the safety of life and property depends on a knotted rope,
you want to make sure that both your knot and your rope
are good.

The success of your knot is up to you. (Andrew Faulkner)

Still, one might notice that these chapbooks are each edited by an editor or two, picked from the other chapbook authors, and I’m intrigued where this group of young writers might go next, or where Faulkner might with this series.

Apart from Faulkner’s own chapbook, and McCann’s (which I’ve reviewed somewhere else), the rest all have interesting moments, but don’t hold together quite as well. Still, each chapbook is more than worth going through, and gives me hope for what these authors might accomplish next.

Is missing his front teeth,
eyebrows wild, face cragged
and miserable some days.
But he still waltzes
with more elegance
than any man I’ve seen.
Each cancerous cell in his body
whirled by music as he conjures
polished dance hall floors
in his best shoes. (Nashira Dernesch)

Ottawa ON: Why do I have to go all the way to Montreal to see drawings of the city I live in? Colin White’s Cool Drawings, Dude: Comix and sketches from the streets of Ottawa (www.colinwhitecomix.com) might not have done it for me for the comics in this publication, but the full-colour sketches of buildings and other locales around the capital are quite impressive, and far more impressive in colour than in black and white. I know he has colour prints available of various of his drawings, and I would certainly recommend that you try to get copies to frame for your empty walls. I wouldn’t tell him to give up on his storytelling, but certainly work on it. I’m getting a print the next time I see this guy, who I never see, despite the fact that, living on Percy Street, I think he’s just around the corner from my Chinatown apartment building.

Toronto ON: I didn’t actually meet her while in Edmonton, but this is the second time I heard during Canzine the same line, first spoken by someone, and then written as part of Fong's bio, writing that she “was born in Edmonton, Alberta in a hospital next to a field that would one day become West Edmonton Mall.” How is it the WEM is so important to these people as a touchstone? In Montreal author Deanna Fong’s first poetry collection, Butcher’s Block (Toronto ON: Pistol Press, 2008), her poems are very uneven, but the ones that are interesting I paused at for a while, to see what she was doing, where she was going, even as she ends her poem “Edmonton” with:

Feeling the terrific throb of the city
and the flush of pavement against our bare feet,

only to have it all evaporate
in a fierce wave of heat.

Fong is the strongest when she pulls her lines in, allows them to be contained and crafted, instead of letting them surge out all over the place, unrestrained to the point of uncontrollable. There are her poems that sound like poems, and her poems that begin to cut across the surface of the skin, working their slow way toward what she is capable of, potentially, but isn’t quite yet, such as the second half of the poem “Evidence,” that reads:

A lurid testament
to the absent body’s pain.

I discard their remains in the compost
under the cover of night,

but the act is not forgotten,
as next spring brings forth

Any careful, suspicious witness on my doorstep
could point a finger down my hallway,

through the kitchen jambs,
at a cupboard lined with peeling floral wallpaper