12 or 20 questions: with Susan Holbrook 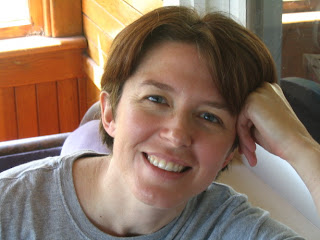 SUSAN HOLBROOK teaches North American literatures and Creative Writing at the University of Windsor. Recent articles on twentieth-century writing can be found in journals such as differences, Open Letter, American Literature, and tessera. She has just co-edited The Letters of Gertrude Stein and Virgil Thomson: Composition as Conversation (Oxford U P, 2008). Her poetry books are misled (Red Deer, 1999), Good Egg Bad Seed (Nomados, 2004), and Joy is So Exhausting (forthcoming from Coach House).


1 - How did your first book change your life?
I liked feeling like a big shot. Even though my parents found the contents appalling, I’m sure they couldn’t help but be proud of that spine in their bookcase – as long as nobody looked inside.


2 - How long have you lived in Windsor, and how does geography, if at all, impact on your writing? Does race or gender make any impact on your work?
Actually I live in Leamington, Tomato Capital of Canada, right next to Point Pelee National Park. I did live in Windsor for a couple of years but pretty much held my breath the whole time. I remember telling George Elliott Clarke that I was becoming paranoid living there, that I was certain the sky over Detroit had gone from yellow to blue in the days preceding the 2000 American election, as if Bush had ordered a smokestack shutdown so people would forget his environmental shortcomings. George (the poet, that is) replied that paranoia was just the beginning of knowledge. So living there, then fleeing to the forest, has definitely heightened an ecological consciousness in me. Point Pelee is an excessive place – the May songbird migrations are absurdly spectacular, with indigo buntings and scarlet tanagers hopping around on the lawn, as are the mayfly and midge populations, cloaking the house so that it looks haunted. Excess is always good for poetry.

Gender, race, sexuality necessarily impact my work, the latter most intentionally in the first book. How identities are registered in language and how language might shift to welcome them are ongoing concerns.

3 - Where does a poem usually begin for you? Are you an author of short pieces that end up combining into a larger project, or are you working on a "book" from the very beginning?
Usually a turn of phrase occurs to me and something sprouts out of that, like those capsules you drop in water that bloom grotesquely into foam animals. If I sit down to write a poem without such a pill, I usually dream up a formal experiment and go from there. So far I just write short pieces until they add up, but I aspire to having a project idea that might be sustained.


4 - Are public readings part of or counter to your creative process?
A part of. They are the best way to realize a poem blows. Also, the shame of reading the same damn stuff every time is a prod to produce.

5 - Do you have any theoretical concerns behind your writing? What kinds of questions are you trying to answer with your work? What do you even think the current questions are?
I think about the limits of ‘sense’ and how what is sensed in excess of semantic comprehension generates meaning. I continue to be interested in the outdoors of language, the waste, the Kristevan ‘poetic language’, the constitutive outside, the between of translations, what can happen there. And newly interesting to me is how to invite the natural world, whatever that is, in through language. This is, I think, one of the “current questions.” It surprises me that although these are my theoretical interests, much of my work ends up fairly accessible and comedic. I think for me humour is a generative mode; it is often produced out of surprise, a pop of pleasure and knowledge. This is another way outdoors. And if one is attempting to effect the erosion of bigoted ideas, humour is a sly method.

6 - Do you find the process of working with an outside editor difficult or essential (or both)?
It’s luxurious. I spend so much of my life editing students’ work, I can’t believe it when someone takes a pencil to mine. I was lucky to have editor extraordinaire Nicole Markotic work on Misled. When one of my poems is half-baked, or I’m not sure if it’s baked, I try to imagine what an editor would suggest.


7 - After having published a couple of titles over the past few years, do you find the process of book-making harder or easier?
The same. Not hard or easy, just takes a long time.

8 - When was the last time you ate a pear?
If you’ve never had a good pear you will think you don’t like pears. If you’ve had good pears in your life, you will suffer an awful lot of mealy, mushy or bland duds, considering them the exceptions to the rule that pears are delicious. But I have had nothing but bad pears for probably three years. At some point this has to stop, doesn’t it? When will I give up and become a person who doesn’t like pears?

9 - What is the best piece of advice you've heard (not necessarily given to you directly)?
From Michael Ignatieff to a friend of mine, who gave it to me in the third year of my PhD: Don’t make your dissertation your Viet Nam.

10 - What kind of writing routine do you tend to keep, or do you even have one? How does a typical day (for you) begin?
No writing routine – poems are written infrequently and haphazardly. A typical day begins with feeding cats and child, and prepping for class.

12 - When your writing gets stalled, where do you turn or return for (for lack of a better word) inspiration?
To books of writers I admire, for e.g. Harryette Mullen, Fred Wah, Margaret Christakos, Bernadette Mayer.

13 - How does your most recent book compare to your previous work? How does it feel different?
Joy is So Exhausting (2009) is less embarrassing. I’m glad I wrote that sassy Misled, guided by an insistence on an active female sexuality, but I was prepared for neither the outraged young Calgarians and Tuscaloosans nor the leering old men in Nelson, B.C. who took my reading as an invitation to swing.


14 - David W. McFadden once said that books come from books, but are there any other forms that influence your work, whether nature, music, science or visual art?
I love scientific language – a textbook on evolution is the spark for the libretto in my new book. Not only is science discursively delicious, but the processes of evolution provide such interesting formal methods.

15 - What other writers or writings are important for your work, or simply your life outside of your work?
I have a long list of writers I admire, but perhaps I’ll just celebrate two here: Louis Cabri and Nicole Markotic, who recently joined my department at Windsor, so that we have a heavenly Creative Writing program now.

16 - What would you like to do that you haven't yet done?
Eat a fantastic pear.

17 - If you could pick any other occupation to attempt, what would it be? Or, alternately, what do you think you would have ended up doing had you not been a writer?
I took a career aptitude test as a young person that slotted me resolutely in the precise category of “translator.”

18 - What made you write, as opposed to doing something else?
Cheaper than paint, equally as exciting, good for introverts.


20 - What are you currently working on?
Finishing two big projects: the poetry book Joy is So Exhausting and the edition The Letters of Gertrude Stein and Virgil Thomson: Composition as Conversation. Starting a book for undergrads about how to read/write about poetry.

Seriously, these posts take up way too much room. You should link to them onto another site, it's a little ridiculous. Although I like Susan.