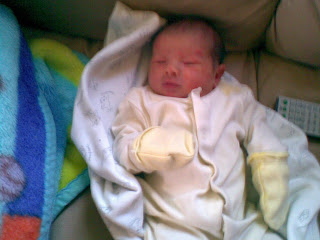 THIS BLOG IS NOW FIVE YEARS OLD [which makes it five years older than my new nephew, Duncan Ian Derochie (above), born at the tail end of May]; What to say after five years? As Amanda Earl reminded me recently, this clever blog of mine turns five years old this month, originally created as a space to post poetry book reviews after my four+ years of writing three weekly reviews for the Ottawa X-Press; I would rather, I told myself at the time, put the energy into writing new pieces than find out-of-date homes for what I've already written. Since then, the blog has become a kind of catch-all, for writing, reviews, essays, interviews and notices; what will the next five years entail?

Obviously, then, I'm home now; will we see you at the ottawa small press book fair, and/or the reading the night before at the Carleton Tavern? The "12 or 20 questions" series will be ending soon, be sure to check around the time of the book fair to see the last interview or two, and even a note on the entire process.

Edmonton AB: Trisia Eddy's new Red Nettle Press had its first chapbook launch at the tail end of May in Edmonton, launching a number of small publications by various authors, including Michael Gravel, Patti Sinclair (also an editor for the press), Jeff Carpenter, Layne L'Heureux as well as a collaboration between myself and Eddy. The creator of a series of lovely little chapbooks published in editions of 100 copies, Eddy is also the new coordinator of The Factory (West) Reading Series, and even a descendant of one of Ottawa's early lumber pioneers, E.B. Eddy (the match factory is mere blocks away from my little Chinatown apartment).

Walking the Dog on Sunday

Red sun in the
hitchpost sky,
red-green fields
stretched out limp,
my feet, hot stumps rasping
in the non-breeze,
my goldenred dog
streaking across the grass,
liquid canine power,
fire-red collar going for the sun,
running over school field
scabs of children,
beside the melting backstop,
back of the ghost rink,
through red dirt of the infield
(like the bloody dew of Utah).
It's a long way up here,
a long way from red,
a long way longer
than the red dog tail. (Michael Gravel, The Fast Places)

One of the most interesting in this first batch (apart from the first title by the press, being Eddy's own, a few months ago [see my review of such here]) has to be Edmonton poet and Olive Reading Series co-organizer Jeff Carpenter's malachi on foot (2008), a short, tight ghazal sequence playing not only off of the late John Thompson's posthumous collection of ghazals, Stiltjack (1976), but off the direct influence of Thompson, citing this line from W.B. Yeats, "Malachi Stilt-Jack am I, whatever I learned has run / wild," as precursor to Thomson's own. Here is the opening poem from Carpenter's seventeen poem sequence:

there are the streets of edmonton old
strathcona there are

smoke inhalation my back turns
on book cinders & gutted abode

There are far too many people who have written and published ghazals over the past few decades in Canada, but these are some of the few (along with Andy Weaver [see my note on a ghazal of his here], Douglas Barbour, Eric Folsom, Matthew Holmes [see my review of his book here; see my mention of a ghazal of his here] and some rare others) that really strike. At the back of the collection, Carpenter (who appeared in a recent issue of The Peter F. Yacht Club) also writes:

…likely, John Thompson stood agape between the contingency of naming and the fixity of a name while he wrote his Stilt Jack. Do you have days like that, when random events feel as incontrovertible as the geometry of the Pyramids, when we are neither capable of integrating ugly accidents into our worldview nor capable of avoiding them. The apparent lack of sequence between couplets of the ghazal—the disintegration of homely form—strives to induce an essence out of an accident in the reader's mind. This is the most productive sort of naming a poet can commit. Gazing into chaos, he chooses to bring back some artifact rather than be seduced into oblivion. Naming makes it so; it cannot make it go away. My name is Jeff Carpenter.

It's interesting that he mentions naming, returning to the subject of a talk that expat-Canadian poet Nathalie Stephens [see her 12 or 20 questions here] did at the University of Alberta a few months ago (the paper she delivered apparently comes out this fall in an edition by BookThug), referring to naming as being something that reduces as opposed to making larger or better. I think Carpenter might have been the only person at the talk who really understood what she was talking about, and managed to take that ball and run.

Ottawa ON: For the upcoming ottawa small press book fair, Ottawa poet Marcus McCann has published a new chapbook, petty illness leaflet (The Onion Union, 2008) in a lovely edition of thirty copies. After various chapbooks over the past couple of years, including one by my own above/ground press, and one forthcoming this fall with Jenna Butler's Rubicon Press out of Edmonton, McCann has been managing to write exquisite little poems that twist in on themselves, managing to trouble the language and lay it out fresh, to be heard as much as meant to exist on the page.

A spigot tricked, a spout lousy,
recovery rebuts a passport by turning
tornadic. Or roundly immobile.
A lockpick hatpinned the apiary

but the drones were drowsy.
The detritus — a lengthening queue
of tasks napping — float, pose, flirt.

Hint: the fitted sheet gave up the ghost,
its elastics don’t react to torture.
Or bed is a blast balance, you're
a live ballast that sleep ape-ends.

With rumours of a first poetry manuscript recently completed, it will be extremely interesting to see where McCann moves himself next. For a copy of the chapbook, the best thing to do would either to show up to the ottawa small press book fair, or email him directly through his own clever blog.

Vernon, BC: Produced as the last of the run of chapbooks by Jason Dewinetz and Aaron Peck's greenboathouse books is Toronto poet/publisher Jay MillAr's WOODS│PAGES (2008). [see my review of their previous chapbook here, by Kate Hall]. MillAr, when he is on, is incredibly on, and recently he managed one of the finest pieces of his career so far with a chapbook out with Vancouver's Nomados [see my review of such here], written, as so many of his works are, in sequence. What makes this small meditation particularly intriguing is just how subtle it sits, how it manages to quietly exist without any fireworks or tricks, but on its own quiet strength.

Only as meaningful and only
so when the senses have been blown through
an acorn the size of a human
brain. Silence is the only theory
a seed to the ear reveals. The sound
doesn’t play in a shell's ocean, but
in the wind. Of pauses held against
contours in a sky the grey matter
makes of itself. A receptacle
as spectacle: a moment of self.

ii. thesame given, a chance thrown

all and nothing, written down, or method
of i-dentifying recol-lecture (rips)
swung arm over arm, it bestows
what it does not have, name,
the unpardonably given, gift
from ear to ear, implausible,
wheregoeu, thin nightblooms, if you won't give it,
unthanks from the bottom of what's thrown.

Moure has been doing a number of translations lately [see my note on another of her recent translations here], bringing a polyphony not only through her own writing, but the writing she brings from other writers, other languages; this is a poetry of dialogue, although it might not always be clear who is speaking, or who is being addressed. As Moure writes as her "translator's note on the text,"

And quasi-quebec. The notes are the translator's, and intend to create counter-narratives to run in, through and against the translated texts, troubling them. The work of Ajens itself contains and embeds many counter-narratives that act from within his text. In English, whether Canadian or UK, a translator can't reconvey quite those same reverberations without turning them into explanations of a Chilean culture and trajectory that still seem "distant." Explanations can't really account here. So rather than patiently explaining the ingressions and transgressions of the text (and his hemisphere) to northern, non-american readers (as Ajens did to me, his Canadian reader), I created the note texts. They are traitorous notes. And thus, I believe, are honest.

For further information, write c/o Maleea Acker, 860 Melody Pl RR5, Victoria BC V9E 2A2 or check out their website at http://www.lamanoizquierda.ca/

UK: I recently read UK author Ali Smith's lovely little novel Girl Meets Boy (Knopf, 2008), a part of the same series of international authors reworking fairy tales [see my note on the Margaret Atwood novella here], as the author of various books of fiction such as (such wonderful titles!) Like, Hotel World and Other Stories and Other Stories reworks Ovid's Metamorphosis. As the beginning of the book writes,

Myths are universal and timeless stories that reflect and shape our lives ― they explore our desires, our fears, our longings and provide narratives that remind us what it means to be human. The Myths series brings together some of the world's finest writers, each of whom has retold a myth in a contemporary and memorable way. Authors in the series include: Chinua Achebe, Karen Armstrong, Margaret Atwood, A.S. Byatt, Michel Faber, David Grossman, Milton Hatoum, Natsuo Kirino, Alexander McCall Smith, Victor Pelevin, Donna Tartt, Su Tong and Jeanette Winterson.

This is a lovely and lyrical little love story, and, apart from wanting to read everything in the entire series, I would certainly like to get my hands on more of her work. Listen to this, from the beginning of the last section, "all together now" (it's not really giving anything away to tell the ending of an already-known myth, is it?) that begins:

It's the happy ending. Lo and behold.

I don’t mean we had a civil ceremony. I don’t mean we had a civil partnership. I mean we did what's still impossible after all these centuries. I mean we did the still-miraculous, in this day and age. I mean we got married. I mean we here came the bride. I mean we walked down the aisle. I mean we step we gailied, on we went, we Mendelssohned, we epithalamioned, we raised high the roofbeams, like her. We crowned each other bride, o bridegroom, like her. We crowned each other with the garlands of flowers. We stamped on the wine-glasses wrapped in the linen. We jumped the broom-stick. We lit the candles. We crossed the sticks. We circled the table. We circled each other. We fed each other the honey and the walnuts from the silver spoons; we fed each other the tea and the sake and we sweetened the tea for each other; we fed each other borhani beneath the pretty cloth; we fed each other a taste of lemon, vinegar, cayenne and honey, one for each of the four elements. We handfasted, then we asked for the blessing of the air, the fire, the water and the earth; we tied the knot with grass, with ribbon, with silver rope, with a string of shells; we poured water on the ground in the four directions of the wind and we called on the presence of our ancestors as witnesses, so may it be! We gave each other the kola nuts to symbolise commitment, the eggs and the dates and the chestnuts to symbolise righteousness, plenty, fertility, the thirteen gold coins to symbolise constant unselfishness. With these rings we us wedded. (pp 149-150)