12 or 20 questions: with Noah Eli Gordon 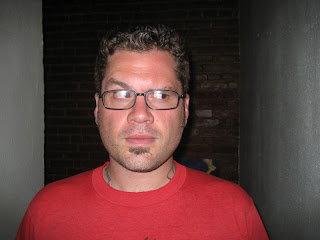 Noah Eli Gordon was born in Cleveland, Ohio in 1975. He received both his undergraduate and graduate degrees from the University of Massachusetts at Amherst. He is the author of six full-length collections, including Novel Pictorial Noise (Harper Perennial, 2007; selected by John Ashbery for the National Poetry Series), Figures for a Darkroom Voice (Tarpaulin Sky 2007; in collaboration with Joshua Marie Wilkinson), A Fiddle Pulled from the Throat of a Sparrow (New Issues, 2007), INBOX (BlazeVOX, 2006), The Area of Sound Called The Subtone (Ahsahta Press 2004), and The Frequencies (Tougher Disguises, 2003). His reviews and essays have appeared in numerous publications, including: Boston Review, Review of Contemporary Fiction, Poetry Project Newsletter, Slope, Verse, The Denver Quarterly, 26, Sentence, Xantippe, Jacket, Publishers Weekly, Talisman, and the book Burning Interiors: David Shapiro's Poetry and Poetics. His recent poetry will appear in future issues of 1913, Practice, Court Green, Shiny, The Inxay Reader, H_NGM_N, The Modern Review, Another Chicago Magazine, and The Laurel Review. He writes a column on chapbooks for Rain Taxi: Review of Books and teaches at the University of Colorado at Denver. He has not eaten meat since around 1993, dairy since around 1997, wears a leather belt and suede shoes, smokes Export A Lights, and enjoys The Glenlivet.

Here, I’d argue that you’ve set up a false dichotomy. For me, public readings—by which I assume you mean readings that I give, rather than those that I attend—have nothing to do with my creative process but are not counter to it.
5 - Do you find the process of working with an outside editor difficult or essential (or both)?
Did I say I was going to answer these in one sitting? Well, I suppose I’m running out of steam here, so forgive me (thank me?) for shortening my responses. I don’t work with an outside editor, so I can’t answer the question. If you’re asking whether or not I show my work to others and ask for their opinions and advice, I’d have to say not really anymore.
6 - After having published more than a couple of titles over the years, do you find the process of book-making harder or easier?

The process of seeing a book though its various stages of publication is a hassle, as it has always been for me. The process of writing a book is even more of a hassle, as it has always been for me.
7 - When was the last time you ate a pear?
I don’t remember.
8 - What is the best piece of advice you've heard (not necessarily given to you directly)?
Don’t go out in the rain without a raincoat.
9 - How easy has it been for you to move between genres (poetry to fiction to non-fiction)? What do you see as the appeal?
Right now I’m trying desperately to force myself to write both a novel and a memoir. This is difficult at times. Yet isn’t difficulty more rewarding?
10 - What kind of writing routine do you tend to keep, or do you even have one? How does a typical day (for you) begin?
Once I’ve landed comfortably within a project whose parameters I trust, I get systematic with it, forcing a specific amount of work per day upon myself. Other than that, a typical day for me is wasted in the effort to land comfortably with a project whose parameters I might be able to trust. This morning started with me eating cereal and watching Kimbo Slice on Youtube.
11 - When your writing gets stalled, where do you turn or return for (for lack of a better word) inspiration?

I read David Shapiro or flip through The Penguin Dictionary of Symbols.
12 - How does your most recent book compare to your previous work? How does it feel different?

From book to book, the aesthetic and ethical dynamics of my writing undergoes a major shift to allow for a full exploration of its particular concerns. For example, Novel Pictorial Noise is comprised of a sequence of prose poems that use the syntax of philosophical proposition to explore the fragility of rhetoric, while The Year of the Rooster is a book-length poem that investigates gender performance, and A Fiddle Pulled from the Throat of a Sparrow is a book of lineated lyric poems that collectively eulogize the loss of instrumental accompaniment in poetry. They’re all very different. My most recent book is Novel Pictorial Noise. Since I’m feeling burnt out with answering these questions, here’s what Publishers Weekly had to say a week ago about the book:

The prolific Gordon here takes his cues from Ashbery—who picked this collection for the National Poetry Series—but also from poets ranging from Rilke to Peter Gizzi. In alternating pages of prose and spare verse lines, he plays freely in the realm between theory and lyric: “Sculpture seeks articulation of the air around it. Thus, a heron thrusting overhead mutes modernism.” Each of the 50 one-paragraph prose poems starts with a proposition and then attempts to both follow through on its initial lunge and also force the reader off the most obvious trails of thought, usually by tossing in a few surprises: an Ajax bottle, Alice Neel, a “dab of wisteria” and a strip of duct tape make appearances in two lines of one poem. Gordon closes each poem with an artfully clumsy rhyming couplet—“One packs in what one can, as the real point of art is the subtle reiteration of the is, ain't it? The way I see it, we're all partially tainted”—alternately lending irony and vulnerability. While this is a difficult book steeped in canonical and postmodern poetic traditions—meaning it won't appeal to everyone—it's packed with thrills and discoveries that might engender some discussion.

The book previous to this one A Fiddle Pulled from the Throat of a Sparrow, is a collection of lyric sequences. I suppose I could point readers to your own thoughts on that book:

13 - David W. McFadden once said that books come from books, but are there any other forms that influence your work, whether nature, music, science or visual art?
Yes yes yes. Rather than repeat myself, I’ll point you to the Raintaxi interview, where I’ve addressed this issue pretty heavily:

14 - What would you like to do that you haven't yet done?
Ha! See the answer to number nine above.
15 - If you could pick any other occupation to attempt, what would it be? Or, alternately, what do you think you would have ended up doing had you not been a writer?
I get paid to teach, not to write, not even for many of the reviews that I write, but I love teaching and wouldn’t want to do anything different, although I’ve always wanted to fly helicopters.
16 - What made you write, as opposed to doing something else?
I burned out on activism, got sick of relying on others with the music I was playing, and had little foundational skill in the plastic arts.
17 - What was the last great book you read? What was the last great film?
My friend Dorothea Lasky’s first book, which is called Awe, was just published by Wave Books. It’s wonderful! The last great film…I suppose it’d be something a little bit older, but newer to me: Spirit of the Beehive.
18 - What are you currently working on?

Well, here I was an hour and a half later at what I’d thought would be the end…okay, here goes: a book-length ambient poem currently called, One Thousand Lines from a Perfectly Functional Book, but sure to change its title soon; A novel that is the retelling of Spinoza’s Ethics through a conversation between two people walking around a parking lot and talking about dogs, an actual dog in someone’s yard, and people in a theater watching what turns out to be a film about two people walking around a parking lot and talking about dogs; a memoir comprised of one thousand short, autonomous paragraphs that don’t follow a specific linear timeline; a collection of interlocking prose pieces that feature as a recurring character The Last Saxon; an experimental novel based on techniques of erasure applied to a work by the novelist Noah Gordon (he’s the reason I’ve got to use my middle name when publishing); a book where I’m asking one hundred poets to give me a poetry assignment, and which will include both the final poems, the parameters of the assignments, and a narrative about the writing of each (four months in & I’m still on the first one!); I’ve been tinkering as well with a few other poetry manuscripts and have a few still in the pipelines that are pretty much done. Whew! Can I go now? As you can see, I’ve got some work to do!
12 or 20 questions archive
Posted by rob mclennan at 12:14 PM
Labels: 12 or 20 questions, Noah Eli Gordon