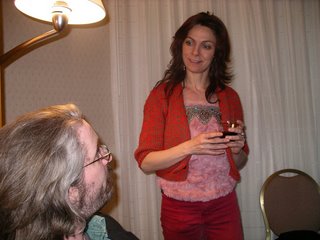 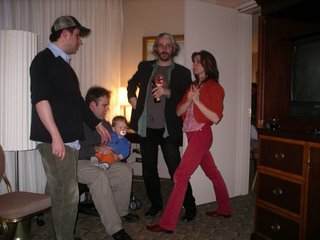 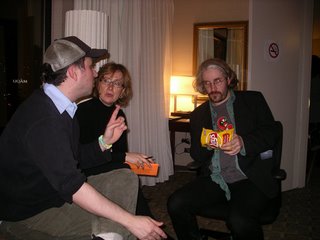 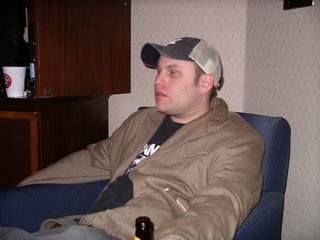 (photos of (clockwise from upper left): N.G. Moore, Andy Brown with Milo, me in my Strong Bad t-shirt + Catherine Kidd in Charlies Angels pose; me + Catherine Kidd; Moore telling us one of his clever ideas, Eileen Melnychuk + me; Jon Paul Fiorentino, post-reading; all photos by Jennifer Mulligan)

Jennifer Mulligan & I drove out to Montreal yesterday afternoon to catch Jon Paul Fiorentino's poetry launch at the Blue Metropolis Festival, for his new collection, The Theory of the Loser Class (Coach House Books). Lovingly hosted by writer/musician Jason Camlot (did you know he's edited a collection of literary essays on English-language Quebec writing?), the room was packed when we got there, & Jon was his usual impish awkward & adorable self (though, thanks to traffic, Jennifer + I managed to completely miss his eight minute reading & all the wine was gone…). Almost immediately up to the hospitality suite (the most important part of any festival), we got to hang out with a number of the usual suspects, including troublemaker & gadfly Nathaniel G. Moore, superstar David McGimpsey, the adorable (& completely clothed in multiple layers of variations on the colour red) Catherine Kidd, writer/publisher Andy Brown with baby Milo (Andy says the new Conundrum Press website should be up soon; watch for his upcoming 10th anniversary party…), L.E. Vollick (although I didn't see organizer Linda Leith anywhere, no matter how many people I asked), with brief appearances even by Wayne Grady & Ottawa's own Seymour Mayne. Got to meet a pile of interesting literary folk I hadn’t known previously, including franco poet & fiction writer Bertrand Laverdure (doesn’t he just have a great first name?), Montreal fiction writer Neale McDevitt, literary agent Eileen Melnychuk, and an African journalist covering the event; we were working to convince him to come to the Ottawa festival (hey, man, our hospitality suite has sandwiches…). Oddly, though, by 11pm, everyone had wandered off from the small hospitality rooms, which made me wonder: what kind of writers festival has a hospitality suite shut down before midnight? It would have been nice to stay a couple of days & really take the events in, but this was such a last-minute idea, so the time we had was rather limited, & it was even impressive we managed to make it at all (next time, perhaps; hell, next time they should invite me to read… heh).

We then drove half back to Ottawa (we never bothered getting around to calling for a B&B Jennifer seriously exhausted & I more than a bit tipsy) to my parents farm, arriving about 1:30am to the warm glow of cloud & stars over the yard, & woke up to soft rain on my old bedroom window (Jennifer woke up to see handcuffs & a Cabbage Patch doll on a shelf in my sister's old bedroom). Spent time with my mother, & got to see how my father had re-done the living room & downstairs hall, tearing out the carpet & putting in hardwood (& there's a dead mouse in the front porch somewhere, but they can't find where, but they can smell it. Did you know they caught over a dozen mice in traps over the space of a day & a half?). Breakfast at the truck stop at the 417 at the Highland Road (Maxville) exit; a fine evening, & visit, in all. Now just waiting for a review copy of Fiorentino's new collection from Coach House so I can start going through it…
Posted by rob mclennan at 2:15 PM