There is a window of time to make language how the mind works. Words are milk so the mind survives on language.

Prove it. Take a boy who left the forest and became evidence. Victor, until twelve, knew only the sounds of rain on leaves, on rock, on dirt—no voices down the hall. No voice in his head. He entered the languaged world late and learned: to be pleasant, to remember remembering, and two phrases.

He loved milk but couldn’t request it. The word was uttered only in the joy of seeing it. Milk! The word contained the feeling. Oh, God! his horrified nanny said at him until it became his song of self.

Victor is used to draw the timeline of the mind, saying we must keep one another inside our words—a boy just asking without asking for milk, making the world a glass we fill by speaking.

Given I’ve published a good amount of this book via Touch the Donkey (where I also interviewed her) and an above/ground press chapbook and broadside (as well as subsequently, through Drunken Boat and Dusie), I’m delighted to finally see the second poetry collection by American poet Jennifer Kronovet, The Wug Test (Ecco, 2016), produced as part of the National Poetry Series (with this particular manuscript selected by Eliza Griswold). As part of her interview for Touch the Donkey, she speaks to some of the content of the current collection when it was still in-progress, writing: “I thought it would be sensible and interesting to write little essays about the factoids and personalities I came across in linguistics, but just like my other sensible plans, the project morphed, became entwined with poetry, the language I think with on the page. These poems—they are and aren’t essays, they are experiments and research and reportage.” Further in the interview, she speaks more on her work-in-progress Loan Words (the manuscript that eventually became The Wug Test):

I recently did complete a manuscript of poems that all dance around in the field of linguistics; it’s called Loan Words. Or, at least, I think the pieces in Loan Words might be poems. In it, there are also case studies, semantic analyses, dialogues, reinvented definitions, and many other forms that are also in the form of a poem. Some of the poems have real facts, some are vehicles to do new research without the constraints of science, and in some, I am the subject of study. One of my professors, when I was studying linguistics, off-handedly mentioned that many of the most important applied linguists were mothers who studied their children. I was lucky to have that seed, to suddenly be able to observe with purpose when my son was born. The manuscript started then, in some ways, and then moved further from home as he grew.

What is interesting in The Wug Test is seeing how those two elements she discusses have come together, from the poems composed as more scientific case studies, against the poems composed around “the boy,” from poems such as “WITH THE BOY, WITH MYSELF,” “WITH THE BOY, WITH THE BOOK,” “WITH THE BOY, WITH MY FATHER” and “WITH THE BOY, IN THE GARDEN.” The two ideas swirl around each other throughout the collection, existing in conversation, overlapping and even blending occasionally, writing out a series of studies on linguistics and offspring, writing the domestic of language and individual words, and the study of the her new self against this small human she’d helped create, becoming himself even as he remains an extension, and even a furthering, of his parents. “Now it is the time of the boy,” she writes, in the poem “WITH THE BOY, NOW,” “and I say things / to see what I mean in a voice I don’t.”

When I create my alphabet. That is not a thought I should have but I do. I’m married. To this script. The way you can’t say wife and husband simultaneously with one tongue.

When I can’t sleep, I say, in my head, the alphabet forward and backward at the same time. Cancelling out what can be said to bring me into No Saying.

The letter A/a in English was probably once an ox. The shape is many sounds—sometimes horned, sometimes innocuous as boneless flesh. I don’t wish the ox into my speech. I can only go back so far. But now: ox and ox.

I search out where sound squirms against script as proof of failure. That is my resistance to myself as speech. Instead: thinking, not thinking. (“LETTER”) 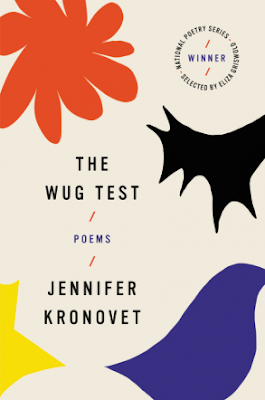 The core of the poems that make up The Wug Test exist as a series of studies in linguistics through a parental lens, allowing the study of linguistics to be but a means to an end, studying both the being of her child and the bond between them. How does one change when one becomes a parent? How does the language shift? As she writes in “WITH THE BOY, ON A WALK”: “The rubber of thinking / solo so much. The primer // of your hand being / affectionate.” Through her son, the solo does indeed extend, becoming both extension and coupling. Part of the strength of Kronovet’s work is the fact of its simplicity, composing straightforward, unadorned lines that strike with such subtlety and force that one barely registers at first, but the effects might last and linger for some time. As she writes in “Q&A”: “I make a space, a room of thought-muscle. Here I train / myself to un-logic and then re-logic. To make answers that aren’t.” There is something in her tone that make me think that if Lisa Robertson wrote like Anne Carson (specifically, her Short Talks), they would be the poems of Jennifer Kronovet’s The Wug Test.

Posted by rob mclennan at 8:31 AM
Labels: Ecco, Jennifer Kronovet